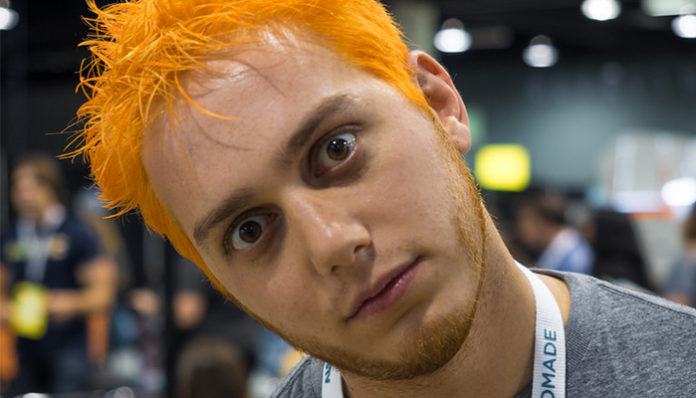 A gaming expert, David Moss aka “Lasercorn” originally rose to fame as one of the many faces of Smosh Games. Originally from Ohio, he had joined the sketch comedy channel in 2012 alongside Ian Hecox, Joshua Ovenshire, Matt Sohinki, Anthony Padilla, and Mari Takahashi. Prior to that, he had worked as a host for Clevver Games, a subsidiary of Defy Media that revolves around pop culture, and style trends.

After many years of working with Smosh, it was announced that he had left the channel in August 2017. Since then, he has joined another comedy group on Youtube called Toaster Ghost, which aims to provide its audience with one-of-a-kind gaming content.

Considering all the time that he pours into Youtube, surely it’s a profitable venture? How rich is the former Smosh member? How much has he banked from his various online endeavors? Unfortunately, Lasercorn’s net worth is still under review at this time. Having said that, let’s take a more detailed look at his career since we’re here anyway.

How did Lasercorn Make His Money & Wealth?

Born on April 24, 1984, David Moss aka Lasercorn spent most of his youth in Ohio. Unfortunately, there isn’t a huge amount of information available on his early life at this time. With that said, he has revealed that he worked as a lifeguard for a period prior to stepping into the YouTube universe.

As it’d happened, he got involved with Youtube after landing a gig with Clevver games in 2010. An incredibly popular channel, it didn’t take long for it to catch the attention of Smosh; before long, he had landed a spot with the group. Over the next few years, he hosted several segments, all of which proved to be a success. Unfortunately, it’s unclear how much Lasercorn was paid for his efforts by Smosh.

One of the six faces of Smosh games alongside Ian Hecox, Joshua Ovenshire, Matt Sohinki, Anthony Padilla, and Takahashi, his popularity quickly grew during this time. It wasn’t until August 2017, that he announced that he would be leaving the group for other opportunities.

Since then, he has created another entertainment channel called Toaster Ghost with his close friend, Sohinki (also a former member of Smosh). Known for their gaming content, the pair has since played several titles including Battle Royale, Far Cry 5, Animal Super Squad, and Mutant Football League, to name a few. As of 2018, they have amassed over 53,000 subscribers with more than 1.7 million combined views.

How much has he earned from the Toaster Ghost channel so far? To answer this, let’s go over some basics- on average, a user makes anywhere from $2 to $5 per 1,000 monetized views; on top of that, approximately 40% of one’s total view count is monetized. Going by this, Lasercorn and his partner Sohinki would have easily already made a few thousand dollars from their ventures.

Given that their channel continues to grow (which has been happening at a steady rate), their Youtube earnings are also likely to go up in the near future.

Yes, he has been married to his wife, Sabrina Moss for many years.

Does Lasercorn Have Any Children?

Yes, he has a son named Tyler who often appears on his social media account from time to time.

Did Lasercorn Go to College?

At this time, it’s unclear whether or not Lasercorn has gone to college.

What is Lasercorn Famous For?

Lasercorn is perhaps best known for being one of the main faces of Smosh Games in the early 2010’s. Today, he is known for the gaming channel, Toaster Ghost, which he co-owns with Sohinki.

Lasercorn currently resides in Los Angeles, California, with his wife and young son. Photos of their home are unavailable at this time.

What Kind of Car Does Lasercorn’s Drive?

Information on Lasercorn’s vehicle is unavailable at this time.

How Much Money Did Lasercorn Earn Last Year?

Information on Lasercorn’s 2017 earnings is unavailable.

As mentioned earlier, the avid gamer recently left Smosh Games in August 2017. Since then, he has been focusing his efforts on his new gaming channel, Toaster Ghost, which he runs with his friend, Sohinki (another former member of Smosh). If you’re a fan of his work, don’t forget to subscribe to his channel.