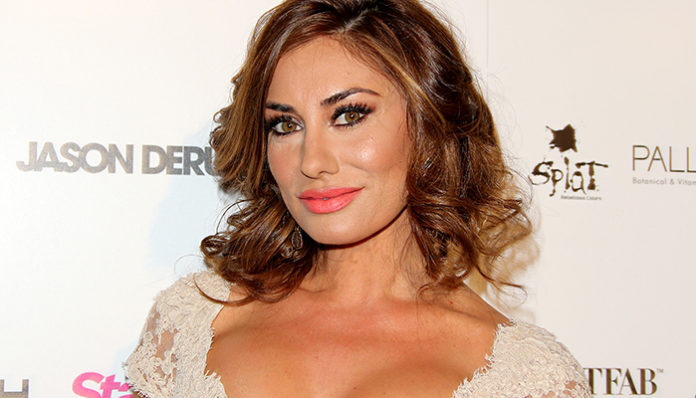 A reality star, Lizzie Rovsek is best known for her appearance on Bravo’s The Real Housewives of Orange County. A former beauty queen, she worked as a fashion designer for many years prior to making her small screen debut in 2014. Introduced in season nine, she remained on the show for a year, prior to returning as a ‘friend’ in season ten. Responsible for her rise to fame, the series remains to be her only television credit, as she’s kept busy with her other projects.

An entrepreneur, the brunette has been busy designing swimsuits for her company, Sun Kitten Swimwear, which is affiliated with the Miss USA Pageant. A lucrative business, the former beauty queen has enjoyed much success over the past few years. Thanks to the popularity of the Bravo series, she’s also earned herself considerable fan base on social media. Active on multiple platforms, she currently has over 300,000 followers on Instagram and more than 76,000 fans on Twitter. If anything, her presence on the web has only increased over the last little while.

With all that said, how wealthy is the former Real Housewives of Orange County star? How much was she paid for starring on the show? How wealthy is the brunette? According to various sites on the web, Lizzie Rosvek currently has an estimated net of $25 million as of 2017. Where did the bulk of this staggering amount come from? For those who are curious about the answers to those questions, we’ll be exploring some of them below so be sure to keep on reading!

How did Lizzie Rosvek Make Her Money & Wealth?

Born on February 1, 1980, Lizzie Rovsek grew up in Columbia, Kentucky, where she had made a name for herself as a beauty pageant queen (that’s right, she had participated and won the Miss Kentucky Teen USA title at the age of eighteen). But that’s not all that she excelled in, she was also an excellent student- in her own words, “kind of a nerd.” Kept active, she was a dedicated member of the school’s cheerleading team.

Following high school, she went to the University of Kentucky where she later obtained a Bachelor’s degree in Fashion Design, Merchandising, and Textiles. Prior to making good use of her expertise, however, she moved to Los Angeles in hopes of pursuing an acting career. While she did eventually land some roles, it was nothing sustainable. Ultimately, she chose to quit the acting business soon afterward, and move to San Diego (with her new husband at the time).

Allowing her creative juices to flow, she went on to work as a fashion designer for the next few years. It wasn’t until 2014 that Rovsek was cast in the popular reality series, The Real Housewives of Orange County. A turning point for the Kentucky native, the show brought her more fame that she could have ever imagined. Introduced in the ninth season, she starred alongside Shannon Beador, Heather Dubrow, Tamra Judge, and Vicki Gunvalson, among others. Finally, she had received the attention that she’d dreamt of having on television.

Following the end of season nine, it was announced that she would not be returning as a main cast member in the subsequent season; instead, she would appear briefly as a ‘friend.’ From there, Rovsek eventually made one last guest appearance in season twelve.

How much was the RHOOC star paid for being on the show? Unfortunately, her paycheck has never been revealed to the public. Having said that, we can probably make an educated guess. Seeing as how she joined the show in 2014, it would make sense that her salary is less than Vicki Gunvalson and the like, who have been on since the beginning of the series. How much exactly? Our best guess is that the brunette received a few tens of thousands for her starring role in season nine.

To sum everything up, a significant portion of her wealth most likely came from her successful career in fashion design. While she would have received a decent amount from The Real Housewives of Orange County, it is nothing compared to the hundreds of thousands that she yields from her Swimwear company. Still, what she earned from the reality series would have supplemented her overall income; all in all, it’s a win-win situation.

For close to a decade, the reality star has been with her husband Christian Rovsek, the owner of ‘an emergency service construction company.’ After a period of dating, the two had married in 2009.

As expected, he had made several appearances during season nine of RHOOC.

Does Lizza Rovsek Have Any Children?

The fashion designer has two sons with her husband, named Kingston and Preston.

Did Lizza Rovsek Go to College?

After graduating from high school, she went to the University of Kentucky, where she studied fashion design, marketing, and textiles.

What is Lizza Rovsek Famous For?

Lizzie Rovsek rose to fame in the ninth season of The Real Housewives of Orange County, which aired in 2014. Since then, she has returned for several guest appearances, though not as a main cast member.

The reality star currently lives in Ladera Ranch with her husband and two sons. A proud mom, she has expressed desire in one day adding a third child- hopefully a girl, to the family.

We do not have any photos of Lizza Rovsek’s house at this time.

What Kind of Vehicle Does Lizza Rovsek Drive?

We do not have details on what vehicle Lizza Rovsek currently drives.

How Much Money Did Lizza Rovsek Earn Last Year?

As mentioned earlier, her most prominent television appearance was in the ninth season of The Real Housewives of Orange County. With that said, the brunette did recently return as a guest for the twelfth season, which premiered in July 2017. As far as we can tell, she has not been featured on the small screen since.

If our assumptions are correct, she has most likely been kept busy with her swimwear company, which she co-owns with her husband.

If you’d like to stay up to date with the reality star, you can visit her on Twitter at @LizzieRovsek or on Instagram at @lizzierovsek. Of course, you can also check out her official Facebook page at @lizzierovsek, where she’s already racked up over 139K likes!