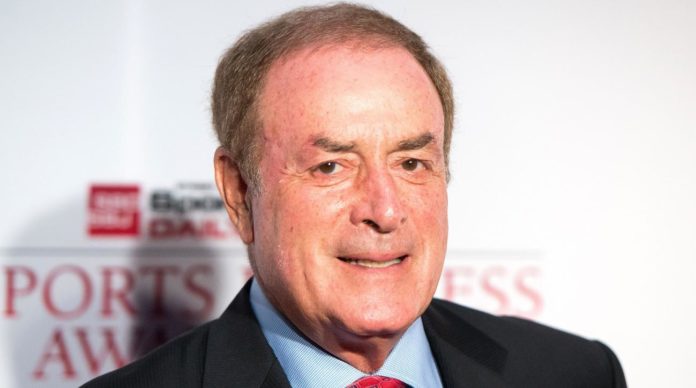 It may be surprising to some just how much sports broadcasters can earn in a year. Compared to similar paying jobs, it doesn’t seem all that stressful. Sure, you work quite a bit and you have to be heard by millions of people, but you’re talking about what you love and watching high-quality sporting events with some of the best seats in the house. Plus, at a certain point, it has got to be kind of like clockwork to call a game. It seems as though, for broadcasters who have been doing it for decades, they probably think in a play-by-play commentary, even when they’re watching a game for pleasure.

Though being a sports announcer seems like an enviable job, there’s a reason why some people managed to hold on to the job for decades. There’s a natural talent for being likable, exciting, and easy on the ears. Al Michaels has all of these qualities. He has been a sports commentator for ages, first calling games for national broadcasts in the ’70s. He has made some of the most iconic calls in the history of American sports and has been the announcer for more games than you could ever hope to count. He’s also one of the very richest people on American television, so let’s take a look at how Al Michaels found all of his success and put together a truly impressive net worth.

How Did Al Michaels Make His Money and Wealth?

As you can probably tell from his accent and mannerisms, Alan Richard Michaels was born in Brooklyn, New York, to a Jewish family. He was born in 1944, which puts him at seventy-three years old at the time of writing, which means he’s certainly in the late stages of his career, although he still has some good years ahead of him. His parents were named Jay Leonard and Lila, and they moved the family from New York to Los Angeles in the ’50s. There was a strange coincidence in this move; Al Michaels grew up as a fan of the Brooklyn Dodgers. The very same year that the Michaels family moved from Brooklyn to Los Angeles, so did the Dodgers. Talk about good luck. 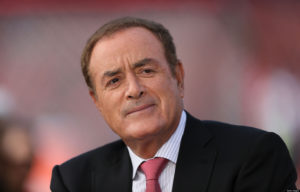 Al Michaels was surrounded by sports as a young man, as he was a baseball player in high school and came from a family that was generally into sports. His first job in television had nothing to do with sports, though, as he got his start in TV on an embarrassing show called The Dating Game, where he had to choose the women that would appear on the show. He likely is not going around advertising that fact these days. He started doing sportscasting shortly after this though. First, he served as a PR guy for the LA Lakers, but they brought him on as a color commentator shortly after. However, he was fired after only four games. He was considered for a color commentating job for the Los Angeles Kings, who had recently joined the NHL, but the job was offered to another man instead. Out of luck in LA, Al Michaels got a job doing play-by-play for the Hawaii Islanders, who were a baseball team in the Pacific Coast League. He called some other sports for the University of Hawaii too, and was generally well-liked there, winning an award in 1969 and getting a cameo in Hawaii Five-O.

His career took off after that, when he got his first major pro sports announcing job, for the Cincinnati Reds, and the next year he did play by play for hockey in Sapporo. The next year, he moved from the Reds to the San Francisco Giants and did UCLA basketball too. In 1976, probably the biggest move of his career came when he joined ABC as a commentator for Monday Night Baseball. Over the next decades, he called nearly every sport imaginable for ABC and is still closely associated with the network. The most famous game he ever called was “The Miracle on Ice,” which has been called the greatest sporting event of the twentieth century. In that came, a United States team of young, inexperienced players somehow beat a way better Russian team, and Michael famously yelled “Do you believe in miracles? Yes!” as the final seconds ticked off the clock. It was the most-watched hockey game in US TV history and was one of the most watched things in 1980 overall. He has called that game the highlight of his career.

In 2006, he decided to move from ABC to NBC Sports, where he remains to this day. He was involved in a weird trade from ABC to NBC that involved the rights to various shows and trademarks, and he started working with John Madden in his new role. He was a daytime host for the 2010 Vancouver Olympics in 2010, as well as all of the Olympics since. Since 2011, he has also been working for the MLB network, where he has called many important games. Considering how many networks he has worked for, how many important games he has called, and how intertwined his name is with American sporting history in the 20th century, it’s safe to say that he also deserves to be one of the highest paid American sportscasters of all time.

Way back in 1966, when Al Michaels was first getting his start in the world of sports 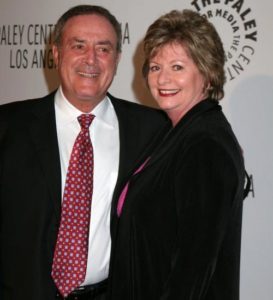 broadcasting, he got married to Linda Anne Stanton. They remain married to this day, which means that they’ve been together for over fifty years. His romantic life surely hasn’t been as interesting as that of other television personalities, but perhaps it has been the stability of a healthy and happy relationship that has helped him to succeed.

Does Al Michaels Have Kids?

Al Michaels and his life Linda have two kids, Steven Michaels and Jennifer Michaels Cohn. He also has one sibling himself: a brother named David and a sister named Susan.

Where Did Al Michaels Go To College?

Al Michaels went to Alexander Hamilton High School while growing up in Los Angeles, where he was a member of the varsity baseball team. After graduating from high school, he went to Arizona State University. While he was there, he was a radio and TV major, and he also picked up a minor in journalism, so it would seem that he graduated equipped to handle whatever the broadcasting world could throw at him. He wrote for Arizona State University’s student newspaper while he was there, and was also a member of a fraternity.

Though Al Michaels is certainly a member of the one percent, he doesn’t live in decadence to the extent that we know some other media figures do. However, his primary residence is certainly nice as hell. He lives in a $3.5 million mansion in Indian Wells, California, which is in the Coachella Valley. Indian Wells is essentially a community for rich old white people, and it has some of the nicest tennis facilities in the country, so maybe that’s what Michaels will do when he finally decides to retire.

How Much Did Al Michaels Earn Last Year?

Last year, Al Michaels pulled in around $6 million through his various broadcasting gigs and other business ventures, which is a pretty standard year for him earnings-wise over the course of his career lately.

Awards and Accolades Given to Al Michaels

Over the course of Al Michaels career, there has been no shortage of honors and awards bestowed upon him. For example, he has won five Emmy Awards, all of them in the category of Outstanding Sports Personality. He was won plenty of Sportscaster of the Year awards, as well as awards for excellence in journalism. He even has his own star on the Hollywood Walk of Fame, which is kind of rare for a sports figure.

It may seem, reading this article, that Al Michaels has had a kind of spotless career, and 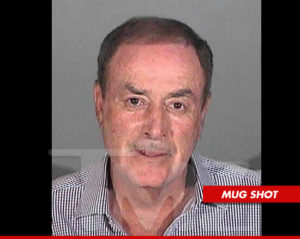 that’s largely true, as he hasn’t had many controversies or troubles circling his name. However, one such controversy did emerge a few years ago when he was arrested and charged with drunk driving in 2013. No doubt acting in accordance with the best legal advice possible, he pleaded no contest to the charges and all he got was some community service and probation.

Let’s close out the article with one more small blemish on an otherwise very impressive and laudable career. A few months back during a Sunday Night Football game, Al Michaels made a joke that the New York Giants were “having a worse week than Harvey Weinstein.” This was in reference to the fact that the famous movie producer was facing allegations of harassment and sexual assault. Cris Collinsworth, who was Michaels’ partner calling the game, was audibly uncomfortable with the joke. Michaels would go on to apologize for the remark later, admitting that he was “being a little flip” in the remarks. It seems like it should have been obvious to Michaels that he shouldn’t have thought it was OK to compare sexual assault to sports, but there you go. We all still have things to learn.