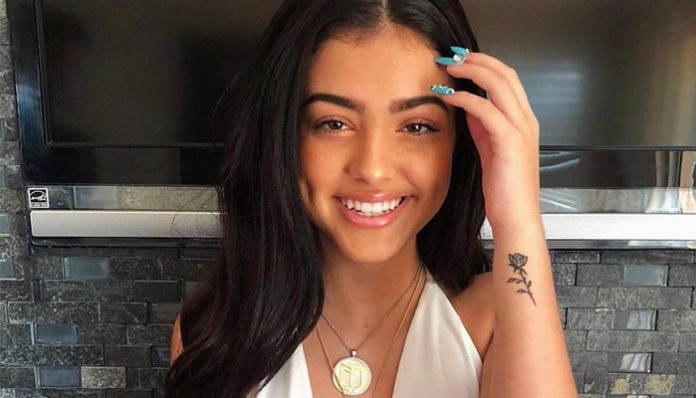 An Internet celebrity, Malu Trevejo initially rose to fame on the photo-sharing app, Instagram. Incredibly popular, she has since amassed over five million followers on the platform. Like most social media personalities, the teen is also active in other outlets such as Youtube, Facebook, Musical.ly, and Twitter. If anything, her fame has only grown at an alarming rate over the last couple of years.

Aside from her successful career in social media, Trevejo has also proved herself to be a talented singer. Signing a recording contract with Universal Music Latin, she eventually released her debut single, Luna Llena in September 2017. Quickly viral, the music video generated over 33 million hits within just seven weeks of release. Since then, the teen has dropped another single titled, En Mi Mente.

Considering all that she has managed to accomplish in such little time, surely she’s banked herself a decent amount? How rich is the 15-year-old? According to sources, Malu Trevejo’s current net worth stands at approximately $100,000. How much of this came from her musical endeavors? Her success on social media? Let’s try to figure this out below.

How did Malu Trevejo’s Make Her Money & Wealth?

Born on October 15, 2002, in Havana, Cuba, Malu Trevejo is the daughter of a Spanish father and a Cuban mother. Not long after her birth, she and her family moved to Madrid, Spain, where they stayed for eleven years; it wasn’t until later on that she relocated to Miami, Florida, with her mother.

Eventually making herself known on social media, she joined Youtube in the summer of 2017. From then until now, the teen has uploaded many videos from songs, vlogs, to Q&A’s with fans. Growing in popularity every day, she has amassed over 182,000 subscribers so far, with more than 7.9 million views across her channel.

Assuming that her channel is monetized, how much has she earned from her videos so far? Seeing as how she has 7.9 million views, it’s probably safe to assume that she’s made anywhere from $6,000 to $10,000 from the site so far. Of course, as her subscriber count grows with time, her earnings are likely also to go up.

In addition to her Youtube career, Trevejo has also embarked on a music career. In June 2017, the teen signed a recording contract with In-Tu Linda, a subsidiary of Universal Music Latin entertainment. From there, she released her debut single, Luna Llena on September 22, 2017. Well received, the music video ended up racking up 33 million views on Youtube within two months of release.

Since then, the 15-year-old has released a second song, En Mi Mente on December 8, 2017. Though not as successful as her debut effort per se, it has received over 6.2 million views on Youtube. For her music, she also has a Vevo channel on Youtube, which already has over 490,000 subscribers.

At just 15-years-old, the singer is a bit too young to be married. As far as we know, she is currently single.

Does Malu Trevejo Have Any Children?

No, the teen does not have any children.

Did Malu Trevejo Go to College?

Being that she is still in high school, it’s unclear whether or not she plans on attending college after graduating from high school.

What is Malu Trevejo Famous For?

Malu Trevejo is perhaps best known for her debut single, Luna Llena, which peaked at number 18 on the Billboard Hot Latin Songs chart in the U.S. Aside from that, she’s also incredibly popular on Musical.ly, with over 2 million fans on the app.

Still, a minor, Malu Trevejo currently lives with her parents in Miami, Florida.

What Kind of Car Does Malu Trevejo Drive?

Malu Trevejo is too young to drive at this time.

How Much Money Did Malu Trevejo Earn Last Year?

At this time, we do not have any information on Malu Trevejo’s 2017 earnings.

As mentioned earlier, she released two singles in 2017, Luna Llena, and En Mi Mente, the former of which went viral on Youtube. In addition to that, she has of course, also been uploading videos to her channel on a regular basis.