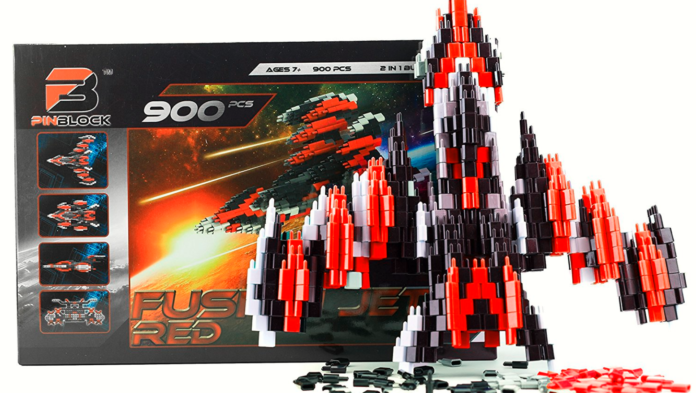 Vlad, the entrepreneur behind Pinblock, started off his presentation with his audition video. He said that he was from Kiev Ukraine but currently lived in Brooklyn New York. Vlad said that he was a curious little child which would wander around taking things apart. He wouldn’t always put them back together. He and his mom lost his father at an early age, and he said that they literally lost everything. His grandparents went to New York, and he and his mother soon followed them.

The videos shot to an image of Vlad and his grandfather sitting at the same table. Vlad said that he did not have an office currently, but he was living in a one-bedroom apartment with his grandparents, his mother, and the cat. He said a lot of times he works at a local café. In the video, Vlad said that he considered creativity to be a large part of his childhood, and he wanted to reflect that in Pinblock. He wanted something that put learning into playtime.

Vlad told the audience that the most difficult part of coming to Brooklyn was watching his mother adapts without his father there to help her. He felt like he needs to be the man in the family, even as a child. He wanted to help support his mom, and that’s his driving force behind making the business a success. 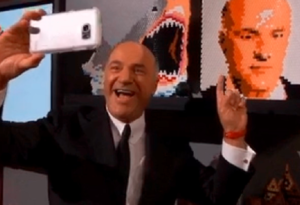 Vlad walked out onto the stage, and into the Shark Tank. He faces the Sharks and introduced himself as the founder and creator of Pinblock. He requested $100,000 in exchange for 20% of his company. He told the Sharks that the future of their children was in big trouble because millions of parents are making one big mistake. They are valuing school over playtime. He said that in school, children are bowed down by rules and memorization. At home, when playtime starts, so does self-exploration and self-development take place. Vlad said that it was then that little Sharks develop creativity and a mind of their own.

Vlad said that more and more parents were slowly realizing this. That’s why they were giving their children the ultimate creative toy, building blocks. He decided to create Pinblock. Vlad said that no manual was required for playtime. He showed that each block looked exactly the same. He explains that the long round depends on the top of each block allow creations to bend and fold in a way that normal blocks don’t. Vlad addressed Kevin and said that he created a real-life mural of Mr. Wonderful’s beautiful face. Kevin said that it was extremely attractive. Vlad ended his presentation by asking the Sharks to help them build the future one Pinblock at a time.

For samples, Vlad had brought the Sharks personalized gifts made out of Pinblock. Robert got a sword and a shield for being the protector of cyberspace. For being the queen of QVC, Lori got a crown and a staff. Kevin, of course, received cold hard cash made with Pinblocks. Mark got pizza with pepperoni on it, and Barbara received a bracelet and a crown.

Mark asked Vlad how his sales looked. Vlad said that he sold through his website and through Amazon, and had done $160,000 in revenue so far. Lori asked to see his packaging. He said that she was holding the starter pack, which cost $19.95. Robert asked how much that cost him to make, and Vlad told him it was three dollars for the package. Mark seemed impressed. Robert asked what he could make with the starter pack. Vlad said that that came with a manual, whereas all the other ones had YouTube tutorials. He made his own tutorials.

Kevin asked Vlad about the Toy Fair. Vlad said that he had been to the Toy Fair in January. He said that they got great responses just showing the prototypes. Kevin immediately jumped into what happened the main retailers such as Walmart, Costco and Toys “R” Us. Vlad insisted that the big box retailers were generally not at the toy fair to seek new products. He said that he secured individual meetings with the larger companies, which asked him to send them samples. Robert asked him if he got any orders that the toy fair and Vlad said that he only received them from smaller retailers.

Lori asked Vlad about his background. Vlad explained that he was from Ukraine. He said that his father really inspired him. He had been into venture capital and currencies, but unfortunately died when he was very young. Vlad said that inspired him from the time he was a little boy to get back everything he had lost. He wanted to be successful in his father’s memory. Lori said that he came here wanting the American dream, and Vlad said that that was exactly it. Robert asked him how old he was now, and Vlad told him that he was just 21.

Robert asked Vlad if he had raised any money to start his business. Vlad told him that he hadn’t. Instead, he and his friend pulled their money together to finance the prototype. Barbara asked what happened to his friend, and Vlad said that his friend still owned 15% of the company, but it was no longer involved with it.

Robert said that there were other things that he could use to make stuff like Vlad builds. Vlad said that he disagreed. Lori concurred, stating that the other things were not bendable. Vlad asked Robert if he would be able to make a crown or watch with other people’s products. Lori asked him if he had a patent on it. Vlad said that he had applied for two patents, and had just been granted the design patent. Kevin said that it was useful. He said that the Pinblock did a bunch of different things, like the dependability and the pixelation artwork.

Kevin explains that years ago he sold his company to Mattel, and had learned a few things about the toy industry. Kevin offered him the hundred thousand dollars in exchange for 30%. He wanted another company to come in, take over production, license it, and give Vlad royalties in perpetuity. Kevin stated that he had no interest in investing in Pinblock unless he could have it put out by a very large toy manufacturer that provides marketing and distribution globally. Vlad said that it was something that went against his initial strategies. He wanted Pinblock to be its own big brand.

Barbara said that she usually didn’t like Kevin’s deals, but since he had a lot of toy experience Vlad might want to consider it. Barbara went out. Lori said that she knew the toy space, and getting people to recognize and understand a new toy like this was a long road. She also went out. Vlad looked disappointed. Robert was up next. He said that he felt like great businesses come from great vision, and Vlad was all over that. Unfortunately, his vision for the business was licensing and that was not something that Vlad was interested in. He went out, but he said that Vlad had accomplished a lot of amazing things.

Mark Cuban said that the toy business was too brutal for him. It wasn’t something that he was interested in investing in, so Mark went out. Kevin said that he made Vlad an offer. He continued, stating that there is a risk that occurs when that happens. Vlad could either engage with his offer or see if someone else was interested. All of the other Sharks had dropped out. Since he only had one option, Kevin had a lot more and leverage. Kevin said that he was going to modify his offer, and said that the only way that it would work for him now was to be a 50-50 partner with him.

Kevin said that he would give him $100,000 in exchange for 50%. Kevin said that he would go to toy companies, who would return his call, and he would bring the toy deals to Vlad. He said that Vlad wants to turn the deals down, he could, but if he decided to accept them than they were 50-50. Mark said that the deal wasn’t as bad as Vlad might be thinking. Vlad could set the offer as high as he wanted, and once he took a deal from the toy industry Kevin would be paying him to be a sales rep and a partner. Kevin said that he was willing to give it a shot, and Vlad would still be in control. Vlad reminded him that he only owned 85% of the business. Kevin said that he still wanted 50%, and what Vlad did with his 50% was his business.

Vlad took a deep breath. He was considering. Mark even told him to take the deal, but Lori told Mark to stop telling Vlad what to do. Barbara asked Vlad if he feels like he needs the help, or if he could do it alone. Vlad looked down, and when he looked up he decided to take the deal. Mark told him he made the right choice. It was really a better deal for the entrepreneur than it was for Kevin. Vlad shook hands with Kevin and walked off the stage.

Pinblock Now in 2018 – The After Shark Tank Update 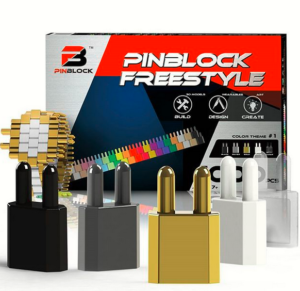 After Pinblock episode aired in January, Vlad posted a lifestream on the business Facebook page. He told his fans that he respected all of their opinions on his Shark Tank deal. He also addressed the skyrocketing orders after his Shark Tank episode aired, and the difficulty that he had kept up with it all. Later on, he showed a video of the Pinblock prototypes and the new sets that were coming out. In the comment section of that video, he said that he redesigned all of the sets from scratch personally, so that took longer than expected. Pinblock got two new manufacturers, and he was expected to launch Pinblock 2.0 by June 2017. Since the updates in February, there has been radio silence. The website, Facebook, and Twitter does not seem to have been updated.

Many things on their website appeared to be sold out. The new addition to the Pinblock store, Pinblock freestyle, is available in four different styles. Those are the only items that are all in stock. As of now, the website does not mention a deal with Kevin, although the social media did way back in February 2017. It seems like Pinblock is alive and well, but they may still be negotiating with Mr. Wonderful. Click here if you would like to check out their website.