Cade is not someone who runs from hard things. As a military veteran who did tours in Iraq and Afghanistan, he is used to working in hostile environments. The one thing that got him through the day when he was still a Navy seal was a hot cup of coffee. Cade decided to develop that into a subscription box business called Victory Coffees. In eight months, without any advertising, he was able to sell $30,000 worth of coffee online. While that might be impressive to most people, would it impress the sharks enough to invest? Let’s take a look. 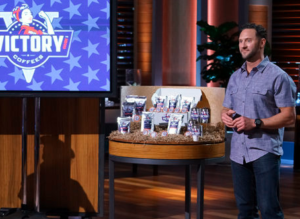 Cade Courtley walked out onto the stage and into the Shark Tank. The scantily clad woman wearing an outfit that made her kind of look like Rosie the Riveter walked beside him, and then went to a seat on the stage. Cade introduced himself to the Sharks and asked them for $250,000 in exchange for 20% equity in his business Victory Coffees. He told the Sharks that he was a former Navy seal, a sniper, and a security contractor. He claimed that he worked in some of the most hostile places on the planet. He said that when you’re working in an environment like that, you crave just a bit of normalcy. For him, that was a good cup of coffee, and that’s why Cade created Victory Coffees. Another motivation for him was not constantly getting shot at. The Sharks laughed at this.

Cade told them that it was a veteran owned and veteran operated coffee delivery service. Customers have the options of choosing from different organically grown, fairly traded, and premium international blends which all had militarily related names. The coffee was available in whole bean, ground, as well as K cups. He ended the presentation by presenting the Sharks with a question: life is too short, so why not start your day off with the victory?

Cade then had his assistant pass out to different cups of coffee to each shark. Robert said that he loved coffee. Cade explained that he had the sharks initials on the front of each month. He asked them to slide the one that they preferred to the front after they tasted them. Kevin said that he was taking a lot of risk with the blind taste test, but Robert said that Cade was a former sniper so he ate risk for breakfast. Robert enjoyed Cade’s coffee the best, and Lori also said that had a better flavor for being a very heavy dark coffee. Kevin also liked Cade’s coffee. Daymond said that he was not a coffee drinker so he didn’t prefer one over the other. Mark said that he chose the one in the lighter cup because he liked lite coffee better.

Robert asked where the coffee came from. Cade told him that he sources the coffee from Central and South America. They also get coffee from Africa and Sumatra. Lori wants to know what made him get into something that had such a competitive field. Cade said that since 83% of people drink coffee, and 56% of those people admit to being addicted to it, he figured he would have a wide customer base. Mark Cuban said that the first rule of Shark Tank is that if you start talking about market size, and start to suggest that if they only get a small percent of the market they would make a killing, it was a big red flag for them. He said that it does everything but focus on the entrepreneurs business and the execution of the business.

Mark said that more important than the size of the general market was the size of Victory Coffees. Cade didn’t answer directly. He said that the difference between the 2 cups in front of the Sharks was that it’s the exact same price, the exact same quality, the exact same convenience. When Robert asked him what made victory coffees distinctive, Cade told him not to underestimate the power of patriotism in the United States.

Mark said that he didn’t want to diminish Cade’s service, but the patriotism thing would only get him in the door. He said back on the business side of it, he wants to know what would happen after he got in the door. Cade said that he just got a major purchase order from one of the biggest insurance companies in the country. Mark asked if he was telling him that Victory Coffees is a business-to-business company. Cade said that that was only one side of it. He said that he began Victory Coffees as a subscription-based service online. Robert asked him what his sales were, and Cade said that he made $30,000 this year so far without any advertising. He told Mark that it was over a period of eight months.

Kevin wants to get down to what the business actually looks like. Cade said that he wasn’t working through a distributor, he actually went to two of his Marine buddies who had been making coffee in DC for two years. Robert let him know that he wasn’t buying the coffee directly, he was going through a roaster. Therefore, what he was really creating was a marketing company. Cade said that Robert was absolutely right. He said that that’s why he was able to get three major corporations to decide that they were going to switch to Victory Coffees. Robert asked how he would scale it because most of the coffee incorporations were bought through third parties. Cade said that one of the things that he wants to do was create the Victory Army, which would recruit train, equip, and employ an all-veteran salesforce. He said that that’s how the company would scale.

Lori said that she realized that Cade had picked coffee because it’s popular, and he knows that it would sell. She said that the double edge sword is that there are 1 million people out there making coffee and selling coffee. They already own the market. She went out. Cade said that he appreciated that Lori said that it was competitive and rough out there. He said that he spent half of his life making bad guys go away, and there is no way that he was going to do an attitude shift from surviving countless operations to giving up because someone might not like his light roast. Robert said that wasn’t at all a question of Cade’s character.

Daymond said that there is no issue with Cade making sure he was going to get the job done. It wasn’t a question of his character. He said that victory coffees were at the Shark Tank too early. Cade tried to explain himself, but Daymond told him to explain it to the other Sharks. He went out. Kevin spoke up next. He told Cade that everyone said the same thing – no one doubts him, it’s just way too early for an investment from the Sharks. He told Cade it wasn’t investable yet. Kevin went out.

Robert asked Cade if he knew what the number 242 meant, and when he said he didn’t Robert explained it. Robert said that that was the number of venture capitalists that the CEO of Starbucks got before he actually got funding. He told Cade that no one doubts his character, but he wanted to see him do good things with the rejection that he got in the Shark Tank that day. Robert said that he was out that day, but wished him all the best of luck.

Cade thanked the Sharks for their time, and they, in turn, thanked him for his service. He said in his interview that he would survive the coffee business in the same way that he survived in Iraq and Afghanistan. He said that he would be quicker better and smarter, and he would crush the competition. Let’s take a look at how Victory Coffee did without getting an investment from the Sharks. 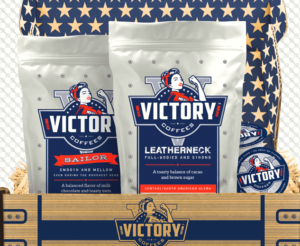 There are not many companies that have five-star reviews on Facebook, but Victory Coffees is one of them. All of the reviews just described great service, as well as a great price. The company was also featured on Fox News for donating some of the coffee to a veterans hospital in Phoenix Arizona. In December 2017, victory coffees were featured on various Christmas lists, such as a Best last-minute foodie gift idea list, as well as an under $50 gift idea list on Dallas news.com. Even though Cade didn’t mean his goal of getting a Shark Tank deal, the product was well branded enough that he probably got a boost from the Shark Tank effect anyway.