The entrepreneur behind Grease Bags is a self-described “mama bear who loves to feed her young.” Latangela did a lot of frying, and she was frustrated with the lack of options for easy grease disposal. When she started researching different options, she was horrified to discover that grease disposal is actually an environmental and municipal nightmare. Between increasing the amount of waste in landfills, and clogging up pipes and costing taxpayers the repair bills, it’s clearly an issue that requires solving.Latangela was up to the task. She developed a prototype for her Grease Bags and decided to take the idea to Shark Tank. Let’s see if they’ll buy into her passion for business and the environment. 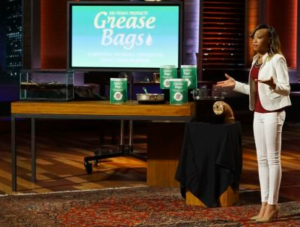 Latangela Newsome from Austin Texas walked into the Shark Tank and onto the stage. She introduced herself and greeted the Sharks. She requested $75,000 in exchange for 25% equity stake in her company, Grease Bags. She told the Sharks that she was known for her home cooking, and was a single mom to a growing boy. She said that his all-time favorite meal is her deep-fried chicken wings. She liked making the meal for him, but it did produce a ton of grease when it was time for clean up. Latangela said that she sometimes transported in an old coffee can, and she knew that some people just poured it down the drain. She gasped and said that drain clogs due to grease buildup are a costly nuisance. The Sharks laughed along with her.

Latangela continued, stating that some cities were spending thousands of taxpayer dollars on pipeline replacement due to fats, oils, and grease. She said that cities were starting to pay good citizens to use responsible grease disposal methods at home. Latangela said that she set out to find a new alternative. She pulled the cover off of her product on stage, revealing the packaging for grease bags. They were in green bags with her recyclable symbol on them that said that they were compostable, reclose a bowl, and disposable. Latangela claimed that even the packaging for the grease bags could be composted.

Latangela demonstrated the process on stage. She picked up a pan on the table on stage, opened one of her grease bags, and told the Sharks that she was watching the grease absorbed like magic. She said that the oil would never clog up the pipes, or bother them again. Latangela claimed that she was the only person with an eco-friendly product for at home grease disposal. She called herself a monster entrepreneur and stated that if they opened up the door she would walk in and sell it. She asked the Sharks who was ready to invest in her.

Barbara asked her what happened to the grease when it went into the back. Latangela said that they had a blend of all-natural oil absorbing ingredients. She said that there is a pad inside the bag which absorbs the oil. She asked the Sharks if she could show them something, and brought out a cup of water with oil on top. She poured the blend of natural ingredients that was in the bag on top of the oil, and it began absorbing it. She then poured the water into a different container and showed the Sharks that it was clear.

Robert asked what it the absorbent was made out of, and Latangela said that she couldn’t tell all of her secrets. She said that it was an all-natural mix that was used for oil spills. She claimed it was safe for plants and animals, and it was used in bioremediation. Robert asked her if there is anything proprietary about the material in the bag, and she said that she had a patent pending on the bag and the pad combined.

Mark Cuban asked Latangela if she had started selling her Grease Bags yet. She told him that she had not, but she’d found a manufacturer, and they were beginning to produce the packaging. Barbara said that she needs to know the price. Latangela said that they were planning on selling them in packs of three. People could buy them once a month at a cost of $12.99. Robert asked what it would cost her to me, and she said it was $2.34 for three bags. Barbara said that her margin was huge, but Latangela explained that because she was still the beginning stages, she set the margin where they wouldn’t have any financial issues.

Barbara asked Latangela is what she’d brought with her was a prototype, and Latangela said that it was. Lori said that she had never fried anything. She ate healthily and did not fry foods at all. Since she had zero knowledge of the product, she went out. Barbara said that she fried bacon every single morning, and she had a lot of knowledge about it. She asked if she would be able to pour hot bacon grease into the bag. Latangela stated that the bag was not currently heat tempered, so she would have to let the grease cool down just a little bit.

Kevin stated that that would be a huge problem, and Barbara also said that she saw that that would be a large use that many people would have for that bag. Barbara went out. Mark asked her if she would be able to fix that to make it heat tempered. Latangela said that she could, but she wanted to do more research to make sure that the bag was compostable. She said that it might be a little bit of a trade-off making it heat tempered versus compostable. Kevin said that it was flawed, and it would leave a large market on available. He thought it should be a foil package. Latangela said that it wouldn’t be compostable then. All Kevin was doing was focusing on the market.

Mark told her that he saw a conflict in the way that she was marketing herself. He said that her target market was green conscious people, but those kinds of people wouldn’t be the type to do much trying since they would most likely be more health conscious as well. He saw that as Grease Bags biggest challenge, and he went out. He saw too much of a complication.

Latangela said that she hated to hear that because she disagreed. She really thought that people were going to use the product. She said that since it was in the oil absorbing product, so you could use it if you’re changing your oil at home, or for disposing of oil-based paints. Kevin said that he would give her an 8.62 for presentation skills. He said that the main problem with for him was that he would never use it since he cooked bacon. Kevin went out.

Latangela took a deep breath and said that she would take the deal. The other Sharks cheered. Barbara said that in Latangela spare time, she would have her sell real estate. Latangela said that she would be willing to sell anything that Barbara through her way. Mark Cuban congratulated her, and she walked off the stage after hugging Barbara. Latangela got emotional in her after-the-episode interview, stating that she thought that Barbara would be a great partner. She really appreciated that Barbara believed in her and her business. Crying, she told the camera that she was very grateful and she couldn’t wait to tell her son. 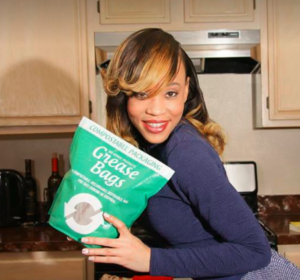 After the Grease Bags episode aired on Shark Tank, they’ve been taking preorders on a simple website that was made by ABC on Shopify. They were supposed to start shipping in mid-October 2017, but as of now, their product is still in preorder. If the customer complaints on their Facebook page are anything to go by, it looks like they have been promising shipment for quite a while. People were getting restless and started requesting refunds and posting mean comments. On December 8, 2017, grease bags posted an update on their Facebook page begging for forgiveness. They said that they have been going through just a call nightmare trying to work things out with their copacker. Between technical difficulties, and FDA regulations they were unable to fulfill all of their orders.

Grease Bags insisted that they were now ready to ship out from a new contractor called Selery in Dallas, Texas. They promise that all of their customers would receive what they paid for, and they would be happy to accommodate customers as they wished, and develop the relationship. They have an interview coming up with Cosmo.com to explain the obstacles and delays. Keep posted here for more updates on the Shark Tank funded company.