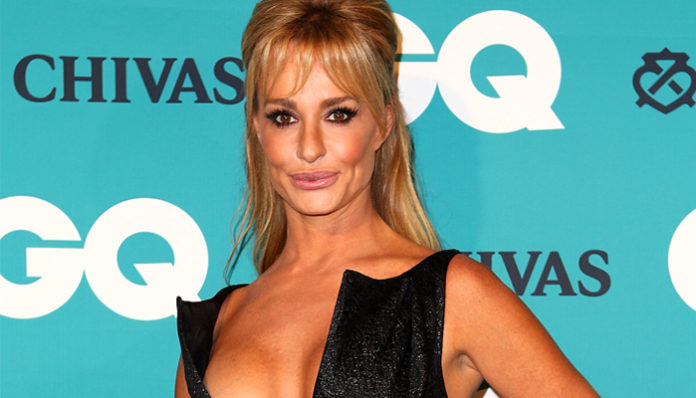 A television personality, Taylor Armstrong rose to fame in Bravo’s popular reality show, The Real Housewives of Beverly Hills. One of the original cast members, she made her debut in the series premiere, which aired in 2010. Some of her fellow housewives included Lisa Vanderpump, Kim Richards, Adrienne Maloof, and Kyle Richards. After being featured in RHOBJ for three seasons, she came back as a guest between 2013 and 2016.

Following her appearance in RHOBH, Armstrong eventually found herself invited onto various talk shows. For instance, she was featured as a guest in Rachael Ray, The Wendy Williams Show, Hollywood Today, Big Morning Buzz Live, and The Insider. At one point, she and her partner also starred in Couples Therapy in 2014.

What else has she accomplished over the past few years? Aside from her television career, Armstrong has also authored a New York Times bestseller; her memoir titled, Hiding From Reality was released in stores in early 2012 to positive reviews. A philanthropist at heart, the blonde also supports many non-profit organizations including the 1736 Family Crisis Centre, which helps victims of domestic abuse. In fact, she had personally designed a bracelet for one of their fundraising events.

Having said all of that, how wealthy is the former Bravo star? Surely, she’s able to enjoy a lavish lifestyle with the many successful ventures that she has? According to sources, Taylor Armstrong currently has an estimated net worth of $400,000. Where did she earn most of this money from? How much was she paid for starring in the Bravo series? We’ll be trying to answer these questions below, so be sure to keep on reading!

How did Taylor Armstrong Make Her Money & Wealth?

Born on June 10, 1971, in Independence, Kansas, Taylor Armstrong grew up in the Oklahoma city of Tulsa, where she attended Union High School, from which she graduated in 1989. An active cheerleader, she was also a member of the school’s cheerleading team. According to sources, she reportedly changed her legal name a few times between the late 80’s and early 90’s.

In 2005, the blonde married her first husband, Russell Armstrong. Together, they had a daughter named Kennedy Caroline, who was born in 2006. Due to alleged claims of domestic violence, however, she eventually filed for divorce in 2011. According to reports, one of his attacks had led her to require a titanium mesh implant for her eye. Not long afterward, her ex-husband committed suicide.

In 2010, Armstrong was cast as one of the main stars on Bravo’s reality series. The sixth series of the franchise, it centered around the lives of several professional women in the Beverly Hills area. Among her co-stars were Camille Grammer, Adrienne Maloof, Lisa Vanderpump, and Kim Richards, among a few others.

Introduced in the first season, Armstrong’s relationship with her husband at the time, Russell, was one of the main focuses of the show. In fact, the couple’s alleged money troubles were brought to light by some of the other housewives throughout the series. In total, the blonde starred on the show for three seasons from its inception in 2010 to 2013.

Thereafter, the blonde returned as a guest for the next three seasons (e.g. seasons four to season six). Most recently, she came back for a brief appearance in the tenth episode of season six, Backwards in Heels.

As one of the original housewives, how much was Taylor Armstrong paid for her time on the show? According to sources, the reality star received $175,000 per season from Bravo. Multiplying this by three for the three seasons that she starred in, she would have yielded a total of $525,000 from the Bravo series. Of course, that’s not including what she also received for her guest appearances in the subsequent seasons.

Aside from RHOBH, Armstrong has appeared in several other shows over the past years including Oprah: Where Are They Now?, The Doctors, Home & Family, and The Insider, to name a few. In 2014, she and her husband were even featured in the reality series, Couples Therapy, for which she probably received an undisclosed amount.

What are some of her other accomplishments? In 2012, she released her memoir, Hiding From Reality: My Story of Love, Loss and Finding the Courage Within, which eventually made it onto the New York Times bestsellers list.

An advocate for speaking up against domestic abuse, she is also a big supporter of the 1736 Family Crisis Centre, a Los Angeles non-profit that aims to help victims of DA.

Since 2014, Taylor Armstrong has been married to the attorney, John Bluher; the couple had tied the knot in Pacific Palisades on April 4, 2014.

Previously, she had been married to Russell Armstrong. The opposite of a happy marriage, he is said to have been abusive to her in the home. In fact, she accused him of domestic violence, after which she filed for divorce in 2011. Not long afterward, he committed suicide.

Does Taylor Armstrong Have Any Children?

Taylor Armstrong has a daughter named Kennedy Caroline (b. 2006) with her ex-husband, Russell Armstrong.

Did Taylor Armstrong Go to College?

As far as we know, the blonde did not attend college after completing high school.

What is Taylor Armstrong Famous For?

Taylor Armstrong rose to fame as one of the original housewives on Bravo TV’s The Real Housewives of Beverly Hills in the early 2010’s. In total, she starred on the show for three seasons, prior to making her exit in 2013 (though she later returned for a few guest appearances).

Taylor Armstrong currently resides in Beverly Hills, California with her husband and daughter. At this time, we do not have any other information on her home and location.

What Kind of Car Does Taylor Armstrong Drive?

We do not have any information on Caroline Manzo’s car.

How Much Money Did Taylor Armstrong Earn Last Year?

At this time, it’s unclear how much Taylor Armstrong had earned in 2016.

As far as we can tell, she has not appeared on television in 2017.

What has she been busy with this year? Looking at her official bio, these may include dedicating time to charity and flying around the country to give speeches.