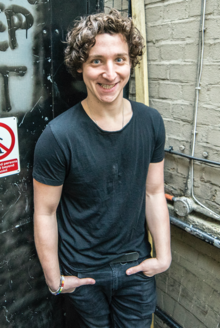 In a world where we can see almost anything on the internet, there are still some things that retain their novelty. The mystery behind illusions and magic tricks continues to fascinate people. Our highly connected society allows us to see the world and its inner workings from our smartphone. Yet magic, something that would have have been “debunked” by now, still remains popular in spite of that. Julius Dein has taken advantage of the novelty of magic, combining the age-old practice with social media to market himself. Julius Dein is a magician and prankster from London, United Kingdom. He has built a large following on Instagram and Youtube, where he has been posting prank and magic trick videos since 2012.

Many companies and people find it difficult to build an audience on the enigmatic mobile social app Snapchat. Young people like magician Julius Dein have proven it is indeed possible to build a large audience on the app, which is notoriously hard to influence. Julius Dein is also popular on YouTube, Instagram, and Facebook, and all of these platforms attract sponsors seeking to influence the fickle 18-25 demographic. He has 13 million followers on Facebook, 2.8 million Instagram followers, and almost 500,000 subscribers on YouTube. Dein is estimated to have almost 500,000 followers on Snapchat (although it is difficult to find the act number due to how Snapchat is set up)

Julius Dein first went viral in early 2017. He claims that the secret to “going viral” is simply making genuinely good content, as well as strategic planning and marketing. Many other social media stars have consulted Dein for help in becoming viral – but it will likely be a while before another star can gain 6.5 million Facebook followers in a span of a single year like Dein has.

When he started his internet career, Julius Dein only uploaded magic videos. However, they weren’t taking off. Dein realized pranks were the fastest way to become viral. After building a large fanbase with his prank videos, he began to post more magic and illusions. This move made him even more popular.

How Did Julius Dein Earn his Money and Wealth? 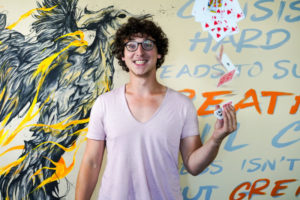 Julius Dein (pronounced like “deen”) was born on April 23rd, 1994 in London England. He has Jewish heritage. His mother is Lee Dein, a teacher and the creator of a handwriting program for young children with dyslexia and other writing difficulties. The identity of his father is unknown. It is unknown if Julius Dein’s father is in the picture, but a common gag in his prank videos is asking random men on the street like his long-lost father.

While growing up in England, Julius Dein studied at the Jewish Free School in Kent, England. The Jewish Free School is one of the largest Jewish schools in Europe. While studying there, Dein began to learn about magic tricks and would perform them at parties. Given his mischievous personality, he likely practiced them in class too. After graduating from the Jewish Free School, Julius Dein attended the King’s College of London. In his Instagram bio, Dein says he is a doctor and a lawyer, so he may have studied medicine and law. However, his bio also says he is Spiderman, so he could be joking about that.

Ding a study abroad year, Julius Dein attended UCLA for a semester. He made many friends during this time, and his magic antics made him very popular in his social circles. Dein also met many social media personalities at UCLA, many of which were struggling to build a fanbase. Realizing he could leverage his charisma for internet fame and fortune, Dein began posting videos on Instagram, Facebook, and YouTube.

While posting his first videos, Julius Dein found his way into many celebrity events. While studying at UCLA, he befriended many rich, famous, and well-connected people, giving him access to many exclusive events. In 2015, the Jewish Chronicle called Dein the “Hollywood MAgician” for his many appearances at such events. These connections helped him go viral, but his magic skills did most of the work of course.

At the outset of his internet career, few people noticed Julius Dein’s videos. Instead of posting the same content, he began to post more prank videos. Prank videos were especially popular when Dein began posting them. Julius was also fearless in awkward or strange situations, which made him extremely popular with viewers. In mid-2016, Julius Dein went viral after several years of creating videos. Within 6 months, he had amassed roughly 6.5 million followers on social media.

Later in his career, Julius Dein began to release more magic and illusion videos along with his usual prank video. His first viral hit, “How to Kiss a Girl With a Magic Trick” combined both a prank and a magic trick. The video received millions of views within a matter of days. Another prank video of his called “Hilarious Stunt” also received a similar amount of views. Dein’s many videos of him playfully harassing his girlfriend at home and in public also received many views.

In June 2017, Julius Dein was signed by the American-based United Talent Agency (UTA). He was the first talent to be signed at the agency’s London Office. The UTA is one of the largest talent agencies in the world. It has over 300 agents who represent actors, writers, musicians, artists, and even internet talent like Julius Dein.

Later in August of 2017, Julius Dein joined forces with the viral sensations, Jake and Logan Paul. In a vlog posted on his YouTube channel, he traveled to Los Angeles where he met the Paul brothers and joined their internet group Team 10. He also appeared in videos with entrepreneurs Gary Vaynerchuk and Lewis Howes, where they discussed how to create quality viral content. All of the internet personalities Dein partnered with have massive dedicated followings, and some of them became fans of Dein after being introduced to him. 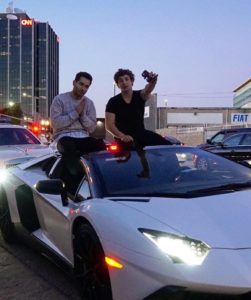