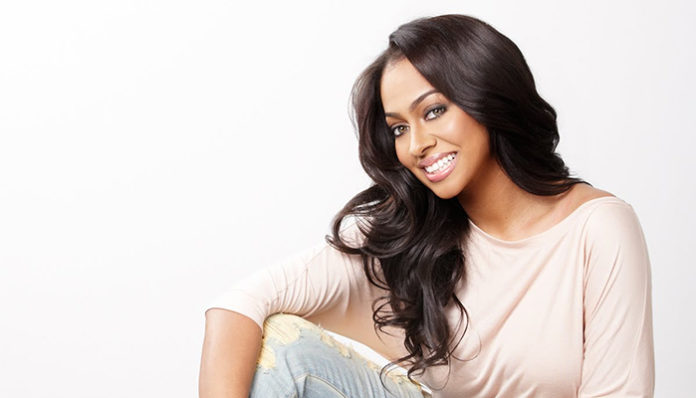 A TV personality, La La Vazquez rose to fame on the VJ music series, Total Request Live in the early 2000’s. Originally from New York, she originally worked in radio for a few years, prior to getting involved with television. Despite having had no previous experience, she managed to land a position with MTV in 2001. From there, she went on to co-host a number of popular shows including Total Request Live, and Direct Effect. During her time with the network, she interviewed several high-profile celebrities including Angelina Jolie, Tom Cruise, and Brad Pitt, among others.

Eventually moving onto acting, La La made her big screen debut in the romantic comedy, Two Can Play That Game in 2001. Over the next few years, she made several additional appearances in the series, Sex and the City (2003), One on One (2004), Monster Island (2004), and Flavor of Love (2006), to name a few. Seizing other opportunities, she had also launched her own production company, ‘Krossover Productions’ in 2003.

Later towards to mid to late 2000’s, La La switched her focus to reality TV. Instead of comedies and dramas, she appeared on shows such as I Love New York (2007), Flavor of Love Girls: Charm School (2007), For the Love of Ray J (2009), and Real Chance of Love (2009). At one point, she even had her own series, La La’s Full Court Wedding, which as its name implies, centered around her relationship with Carmelo Anthony. In fact, it eventually led to the popular spin-off, La La’s Full Court Life, which aired from 2011 to 2014.

In addition to her successful television career, she is also an entrepreneur with her own cosmetic line called, MOTIVES by La La. As if that wasn’t impressive enough, she even has her own clothing collection, which is available exclusively at Shopbop. But wait, there’s more- she’s also the author of a New York Times Best Seller, The Love Playbook.

With all that said, what has the television star been up to lately? What new projects has she taken on in the recent months? What happened to La La Vazquez? where is she now in 2018? Hopefully, we’ll be able to answer these questions for you below.

Born on June 25, 1983, in Brooklyn, New York, La La Anthony (Real Name: Alani Nicole Vazquez) was raised in New York City with her three younger siblings. Growing up, she enjoyed many activities, one of which included music. Later in her teens, she started to work for WQHT-FM, a radio station in NYC. Following a short internship, she was given her own show alongside rapper and actor, Ludacris- while she was still in high school.

Following her high school graduation, La La was offered her own radio show (what would later be The B-Syde) on the Los Angeles radio station, 92.3 The Beat. Jumping at the opportunity, she worked there for the next couple of years. As it happened, she was later offered a position in MTV in 2001, despite having had no previous television experience.

Becoming one of their new talents, she went on to co-host a number of popular TV shows including Total Request Live, and Direct Effect, the former of which played a large part in her rise in fame. During her years with MTV, La La had the opportunity to interview several high-profile celebrities including Angelina Jolie, Will Smith, Tom Cruise, and Brad Pitt, among others.

Around that same time, she also made her feature film debut in Mark Brown’s romantic comedy, Two Can Play That Game, starring Morris Chestnut and Vivica A. Fox. From there, the TV host appeared in a handful of titles including 50 Cent: The New Breed (2003), Sex and the City (2003), Monster Island (2004), and One on One (2004), to name a few.

Over the next few years, the actress gradually became more involved with reality television. For instance, she had hosted the popular reality game show, Real World/Road Rules Challenge on MTV for two years in the mid-2000’s. Not long afterward, she also appeared on the Flavor of Love and the I Love New York series, both of which aired on VH1.

By 2010, she had her own reality series. Premiered that fall, it followed La La and her partner, Carmelo Anthony, as they prepared for their long-awaited wedding. Six-episode long, the show ran from September 19 to October 24, 2010.

A year later, a spin-off titled, La La’s Full Court Life premiered on VH1. Debuted on August 22, 2011, the series followed La La as she worked to balance married life with her career. More successful than its predecessor, the pilot episode drew in nearly two million viewers in the U.S. Unlike La La’s Full Court Wedding, which was ultimately short-lived, the show aired for three years; by the end of its run, there had been well over 40 episodes.

Not long afterward, La La landed a role in the crime drama-thriller, Power (2014). Produced by rapper 50 Cent, it premiered on Star on June 7, 2014. Created by Courtney Kemp Agboh, the series centered around the owner of a popular New York City nightclub, Truth. While Omari Hardwick played said character, James St. Patrick, the actress played the role of LaKeisha Grant.

Introduced as a recurring character in the first season, she appeared on-and-off for the next three seasons, prior to being promoted to a series regular in the fourth season. To date, it remains to be La La’s most prominent acting role on television.

With that said, she has appeared in several additional projects since including the films, Think Like a Man Too (2014), and Chi-Raz (2015).

On December 25, 2004, La La became engaged to NBA player, Carmelo Anthony. After a six-year-long engagement, they tied the knot in New York on July 10, 2010. As mentioned earlier, their nuptials were the focus on the VH1 reality series, La La’s Full Court Wedding.

Earlier this spring, it was announced that the reality star separated from her husband after it’s said that he impregnated a woman at a gentlemen’s club. Later in the summer, however, it was revealed that the two are not divorcing at the moment.

As touched upon briefly earlier, La La has her own production company called Crossover Productions, which she founded back in 2003. In fact, she had helped to produce Mike Tyson’s critically acclaimed documentary film, Tyson, which was released in 2008. In addition to that, she has also worked with director Brett Ratner on the film, The Gun.

An entrepreneur, she launched MOTIVES by La LA, a cosmetic line designed for women of color in 2012. A year later, she also released her own clothing collection, 5th & Mercer, which is available exclusively at Shopbop.

In 2014, La La published her first book, The Love Playbook, which ended up becoming a number one hit on the The New York Times Best Seller List. Her second book, The Power Playbook was made available in the summer of 2015.

What is La La Vazquez Doing Now in 2018 – Recent Updates

In January 2017, the actress appeared in the biographical mini-series, The New Edition Story, which revolved around the R&B boy band, New Edition. One of the supporting characters, she played the role of Flo Payne DeVoe, Ronnie’s mother.

Next, she appeared in Ernest Dickerson’s drama film, Double Play. Released in May 2017, the plot was based on the novel, Dubblespel by Frank Martinus Arion.

As for television, La La is currently appearing in two series, the satirical comedy-drama, Daytime Divas, and the crime drama, Deuces, the latter of which was released via Netflix. Of course, she has also been reprising her role in the Stars crime drama, Power.