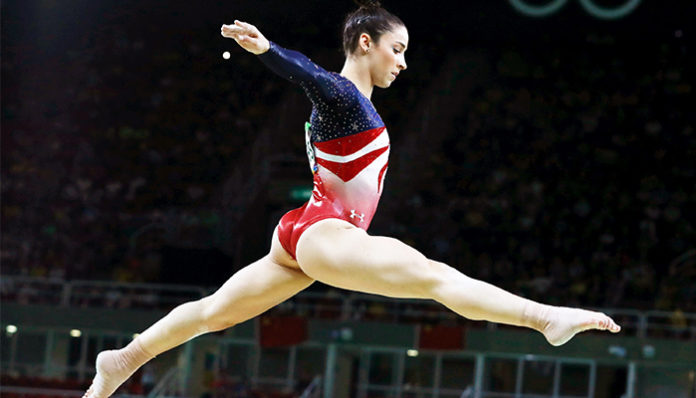 A two-time Olympian, Aly Raisman was the captain of the “Fierce Five” artistic gymnastics team during the 2012 Summer Olympics. Incredibly talented, she has brought home three gold medals from the event- two from London, and another from Rio de Janeiro in 2016. As if that wasn’t impressive enough, the brunette is also a two-time World Champion.

Like most Olympic athletes, Raisman has been featured on television a number of times over the past years. In fact, she had competed in the sixteenth season of ABC’s dancing competition, Dancing with the Stars in 2013. Partnered with two-time champion Mark Ballas, she ultimately finished in fourth place.

How successful is the gymnast now? How rewarding has her career been for her so far? Outside of the sport, what other projects is she involved with? How rich is the 23-year-old? From our research, Aly Raisman’s current net worth is around the $2 million mark. Where did the bulk of this amount from? Let’s explore this questions down below.

How did Aly Raisman Make Her Money & Wealth?

Born on May 25, 1994, in Needham, Massachusetts, Aly Raisman is the oldest of four children, she has three younger siblings named Madison, Chloe, and Brett. Like most Olympic athletes, she took up gymnastics at an extremely young age- when she was two years old. Growing up, she attributed her love for the sport to the performance of the “Magnificent Seven” at the 1996 Summer Olympics.

For the next few years, she trained at the Excel Gymnastics and Climbing facility. After Level 8 however, she switched to the American Gymnastics Club, where she was coached by Silvia and Mihai Brestyan. By the age of fifteen, Raisman was competing on the junior level. That year, she took part in several competitions including the U.S. Classic, and National Championships.

From there, she moved up to the senior level in 2010. A fruitful year for the young gymnast, she went on to earn a gold medal in the team event at the Pacific Rim Championships. Not only that, but she had finished third on the podium at the National Championships for the All-Around, Balance Beam, and Floor Exercise.

Two years afterward, she took part in her first Summer Olympics in London, as the captain of the Fierce Five. During the event, she won three medals- two golds in the Team and Floor Exercise, and a bronze in the Balance Beam event.

Since then, Raisman has also competed in the 2016 Summer Olympics in Rio de Janeiro. Representing the United States once again, she won a gold in the team event and two silvers in the all-around and floor exercise.

As far as endorsements go, the athlete has worked with a number of brands in the past including Playtex, Ralph Lauren, Revision Skin, and Kellogg’s. Naturally, she would have been paid a decent amount for each gig.

Speaking of other projects, she has also appeared a number of times on television. For instance, she was a contestant on the sixteenth season of Dancing with the Stars in 2013. Partnered up with Mark Ballas, she ultimately finished the competition in fourth place.

As far as we can tell, Aly Raisman is currently single.

In the past, she had dated Colton Underwood, a former NFL tight end.

Does Aly Raisman Have Any Children?

No, Aly Raisman does not have any children.

Did Aly Raisman Go to College?

As far as we can tell, Aly Raisman has not attended college.

What is Aly Raisman Famous For?

As a professional gymnast, Aly Raisman is best known for having won gold medals at the 2012 and 2016 Summer Olympics.

As far as we know, she currently resides in Massachusetts. Further information on her location is unavailable

What Kind of Vehicle Does Aly Raisman Drive?

Information on Aly Raisman’s vehicle is unavailable at this time.

How Much Money Did Aly Raisman Make Last Year?

Last fall, the gymnast came forward as one of several victims who was sexually abused by Larry Nassar, a former Olympic team physician. Later in January 2018, she read an impact statement at his sentencing.

Want to follow the Olympic medalist on social media? You can find Aly Raisman on a few outlets such as Twitter at @Aly_Raisman or Instagram at @AlyRaisman. On Facebook, she also has a fan page which you can visit by clicking here.