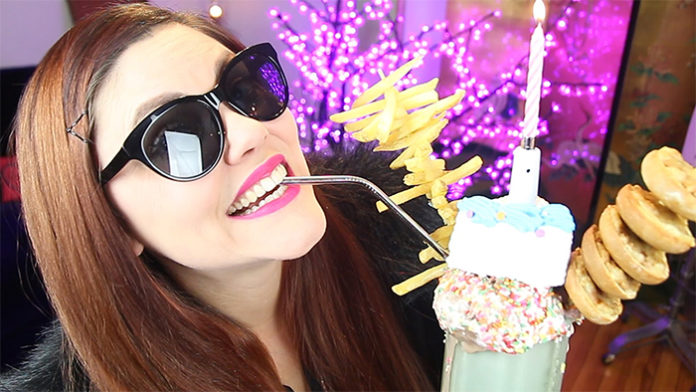 A social media personality, Corinne Leigh is perhaps best known for her appearances on the YouTube channel, ThreadBanger. Some of her most popular videos to date include DIY Galaxy Slime, How to Make Cleaning Slime, and DIY Water Blob. As of 2018, the DIY channel has gained more than 3.8 million subscribers.

In addition to that, she also has her own self-named YouTube channel, on which she vlogs on a regular basis. Though not as popular as ThreadBanger per se, it’s performing relatively well, with over 1.1 million subscribers (and counting) to date. If you’re a fan of her work, you definitely want to check out her personal page as well!

Seeing as how active she is on YouTube, surely it’s a profitable venture? How much has she pocketed from her videos over the years? How wealthy is she? From what we can gather, Corinne Leigh’s net worth is currently around the $1.2 million mark. Wondering where she earned most of this from? So are we- hopefully, we’ll be able to figure that out, as we explore her career more below.

How did Corinne Leigh Make Her Money & Wealth?

Born on January 31, 1981, in Las Vegas, Nevada, Corinne Leigh grew up in New Jersey due to her parents’ work in the Air Force. Unfortunately, not much else has been revealed about her early life. Sometime around 2004, she met and befriended her future husband, Rob Czar.

Ultimately, it was in 2007, that she stepped into the social media scene. That year, her husband launched the DIY YouTube channel, ThreadBanger. Their first video, LA Graffiti Artist Interview was uploaded on May 7, 2007. Relatively popular, it managed to draw in quite a number of clicks. As they continued to post more videos over the next year, their fan base also grew. Before they knew it, the pair had gained more than one million supporters on the site.

From then until now, their success has only heightened. As of 2018, their DIY channel has gained more than 3.8 million subscribers, with more than one billion total views. How does their popularity translate, in terms of ad revenue? How much have they earned over the years? Assuming that less than half of their total views display ads and that they receive a few dollars per 1,000 monetized views, their videos have most likely already made them close to $2 million!

Aside from their collaborative account, Corinne also has personal channel under the username, TheCorinneLeigh. Launched in 2010, its content generally consists of vlogs, with the occasional DIY video sprinkle in between. As of 2018, her work has gained her more than 1.1 million subscribers on the site, with more than 45 million combined views.

Assuming that this channel of hers is also monetized, how much would she have yielded from it so far? Given what we said about Google’s payouts is true, her 45.9 million views would translate to approximately ~$90,000 in ad revenue (prior to the site’s cut).

She has been married to Rob Czar, for many years. Allegedly, the two first started to date around 2004. Today, they both run the DIY YouTube channel, ThreadBanger.

Does Corinne Leigh Have Any Children?

No, as far as we know, she does not have any children.

Did Corinne Leigh Go to College?

What is Corinne Leigh Famous For?

Corinne Leigh is best known for her work on the DIY YouTube channel, ThreadBanger, which has gained more than 3.8 million subscribers to date.

In addition to that, she also has a considerable fan base on her personal, self-titled Youtube channel, TheCorinneLeigh.

Corinne Leigh and her husband currently reside in Los Angeles, California, for their YouTube career. Photos of their abode are unavailable at this time.

What Kind of Vehicle Does Corinne Leigh Drive?

Information on Corinne Leigh’s vehicle is unavailable at this time

How Much Money Did Corinne Leigh Make Last Year?

Unfortunately, details on her salary are unavailable at this time.

Over the past year, Corinne has been kept busy with the two YouTube channels, both of which she updates on a regular basis. Don’t want to miss out on the latest video additions? Make sure to subscribe!

Did you know that she is also active on other platforms? You can find Corinne Leigh on Twitter at @CorinneLeigh or on Instagram at @CorinneLeigh. On Facebook, you can also check out her official fan page by clicking here.