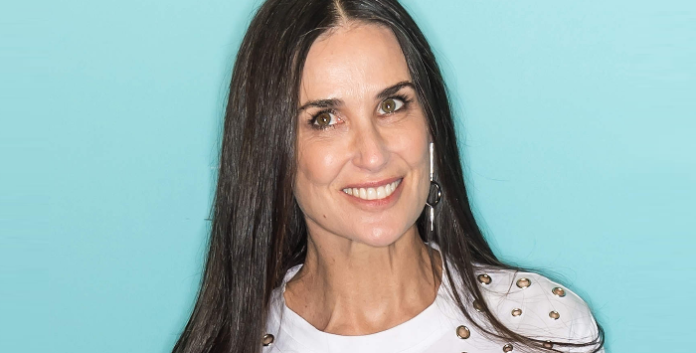 Demi Gene Guynes, better known by her stage name Demi Moore, is a famous Hollywood actress and model. Through her work, she became one of the richest people in show business, and today we’re taking a look at her net worth and private life. Let’s get started!

How Did Demi Moore Make Her Money And Wealth

Here is the story of Demi Moore’s $150 million estimated net worth.

She was born in 1962 and moved to West Hollywood when she was 15 years old. A year after, she dropped out of high school to pursue modeling and started working as a pin-up girl. Before her acting gigs, she was a songwriter. Speaking of acting gigs, her first role was in 1981, in Choices. Over the next few years, she kept starring in several lesser-known movies.

In 1984, she started gaining fame after her role in Blame It On Rio. In 1990, she starred in Ghost, which is her most prominent role until this day. During the next several years, she became Hollywood’s highest paid actress, earning $12,500,000 for her role in Striptease.

In the past few years, Moore kept acting and expanded to television series. Her most recent role is in the recent TV series Empire. Through her long career, she earned a net worth of around $150,000,000! Next up we’re taking a look at how she spends that kind of cash.

Moore is currently not married, but she used to be, three times! Her first marriage was with Freddy Moore (yes, that’s where her stage surname comes from). The two were married for 5 years, from 1980 to 1985. A year after, she got engaged to Emilio Estevez, but they split up before taking the vows.

In 1987 she married another popular actor, Bruce Willis. They were married for 13 years, and have three children together – Rumer, Scout, Tallulah – all girls. And finally, her third marriage was with Ashton Kutcher. The couple married in 2005. The rumors about the couple breaking up started in 2011, and their divorce was official in November 2013.

The latest word on her love status is that she’s dating Tobey Maguire, whom you might recognize from the Spiderman movies.

Unfortunately, her annual earnings for the last few years are not available.

Here are some of Moore’s more popular movies, together with her salaries from them:

While her current living whereabouts are unknown, we know that she sold her penthouse last year, for a whopping $45 million! The asking price was close to $75 million, but with no takers, it was slashed down to ‘just’ $45M. It was bought in 2017 by an unknown buyer, who will be paying around $20,000 per month just for the maintenance. The home was bought by Bruce Willis and Moore back in 1990, for around $8.5 million.

Moore is often spotted in a German luxurious car, the Mercedes-Benz S500. This amazing car costs around $90,000 (base price). Any additional upgrades will increase its price significantly, up to over $200,000, which is our guess for Moore’s Benz cost. Other than that, she was spotted driving a Toyota Prius, a hybrid car that costs around $30,000. Her ex-husband, Ashton Kutcher, bought her a Lexus LS 600H before they split up. He spent somewhere around $120,000 on the gift.

Together with Kutcher, she started a nonprofit called The Demi and Ashton Foundation. The goal of the foundation is to fight child slavery. In 2012, the foundation was renamed to Thorn: Digital Defenders of Children, expanding their mission.

With another ex-husband of hers, Bruce Willis, she bought the Liberty Theatre in Hailey and donated it to a theatre organization, Company of Fools.

She donated $90,000 to a Californian shelter for children and seniors, after it burned down in 2009.