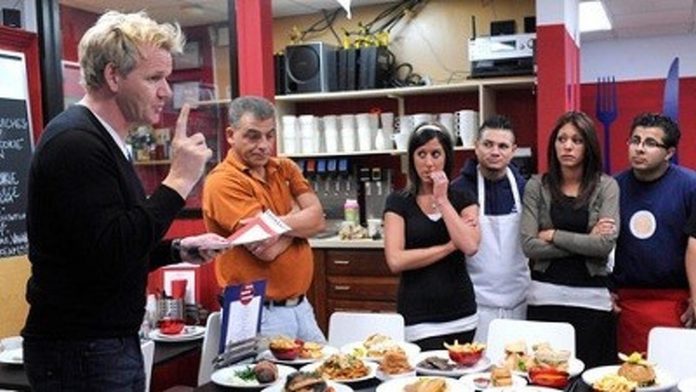 Whitehouse Station, New Jersey, is a quaint location surrounded by farmland. It’s also a very popular place for New York City commuters to live in. Bill and Adele, two restaurateurs, have run successful diners out of Whitehouse Station for decades. Overall, they have made approximately a million dollars with their previous businesses. Bill had said that he was retired and done, and things were nice. When Adele retired, however, she was bored by the third day. In 2006, the husband and wife came out of retirement to open their first fine dining restaurant with their daughter, Cheryl.

Flamango’s was opened since the family loved Florida. They loved the tropics and the hot weather, and everything about it. Cheryl had the idea for the name by combining “Florida” and “Mangos” to get Flamango’s. This was attempted to be a high-class restaurant, but all of the servers find it hideous beyond belief. The restaurant is also very poorly run, and Adele does not respect her staff. She tells her workers to shut up, and that she’s actually cursed. In short, none of the staff is overly fond of Cheryl.

Bill is in charge of the maintenance, as well as the steak and bartending. This is all hard on him, and the staff all feels bad seeing Bill overworked like that. The food is not magnificent, either- chef Jon has only been a chef for four weeks. He wishes so badly that he could redesign the menu, but the staff does not want him to change anything. Adele acknowledges that Flamango’s is performing lousy, but they don’t know why. Adele cannot sleep at night because she can only think all the money they spent that would have been their retirement money. She sees them almost out on the street, and if the restaurant fails, they will lose everything.

Adele is the first to admit that the only person she thinks can save them is Gordon Ramsay. So, Gordon Ramsay rolls up in a bright candy red, classic car. He mentions on the drive in that this isn’t the New Jersey that he knows and is used to. He has come to visit Flamango’s, and since there’s a long time before the restaurant opens, he opts to visit the family at home rather than go straight to the restaurant. 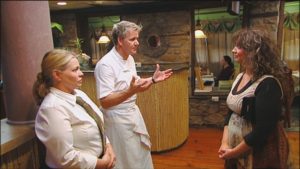 Gordon Ramsay pulls up to the family farm. The journey was a road and a half, he jokes, and he meets Bill tending to his cows. Bill is 70, although Gordon says he looks great for 70. The plan was that Bill is supposed to be retired now, but he bought a restaurant instead, and now he’s broke. Gordon is in disbelief that they came out of retirement. However, Bill explains that they made a lot of money with their restaurants, but he doesn’t know what the matter with Flamango’s is. In fact, Bill is in it to fix the restaurant for Cheryl and Adele.

Gordon meets Adele, then asks why they would come out of retirement to open another restaurant. Adele says that they wanted to do things as a family, and Gordon also meets Cheryl. Cheryl lives with Bill and Adele, and she is 42 years old. Gordon also cannot believe that – Cheryl is the same age as Gordon, but he left home when he was 18. Cheryl admits that she hasn’t had a paycheck in two years, so she has to live at home. Adele then says that Cheryl doesn’t bring anyone home, let alone any guys. Gordon changes the subject and offers the family a ride to their restaurant in his car.

On the ride over, Gordon is trying to understand the namesake behind the restaurant. When he finally gets it, in true Gordon Ramsay fashion, he asks Cheryl if she is “f***ing bonkers.” Finally, they have arrived at the restaurant, and Gordon’s work can begin. He enters the restaurant and immediately lets out a curse. Everything in the restaurant is tacky, and he notes that it’s like a zoo. Adele says that Cheryl decorated and designed it. He asks how drunk she was when she put the sketch together. However, Adele sees nothing wrong with bringing the tropics to Whitehouse Station.

Waitress Jody is left in charge of Gordon’s experience. He starts by ordering Ahi Tuna on the flaming tiki platter, and a tsunami of filet mignon. In the back, chefs Jon and Bryan receive the order and start preparing the food. Gordon digs in, and immediate coughs. The Ahi Tuna is spicy and hot, and Gordon says that it’s an embarrassment of tuna. He asks for the food to be sent back, and for the chefs and Cheryl to taste it. Jon admits that in his few weeks, he has received four complaints about the tuna being too spicy. Even worse, the ribs that they prepped four days ago are all “destroyed.” 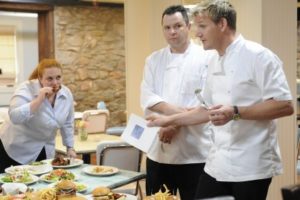 The platter is brought out, and Gordon actually loves the plating of the dish. He says that when he sees a plate like that, he can’t help but hear Hawaiian music. The center of the plate is equipped with a little smoker, and Gordon smokes some ribs. The ribs become attached to the smoker, and Gordon curses. The ribs are disgusting, and he spits it out.

In the back, Bill is asked to don his black chef’s coat. He does this when he’s asked to serve filet mignon from tableside, so he strips down and changes jackets in the back. Gordon narrates the history of the filet mignon, saying that it’s a chef’s favorite. However, Bill rolls out the trolley and then Gordon becomes beside himself. Filet mignon is never served from a trolley. Bill dumps garlic butter on top of the filet mignon, and the entire scene looks disgusting. Gordon also looks disgusted. He digs in but is the toughest and chewiest filet mignon he’s ever tasted in his life.

The food is sent back, and Adele finally sees the writing on the wall – Gordon hated the food and decor, but she can’t understand why. So, Gordon heads to the back to discuss matters with the chefs. Chefs Bryan and Jon admit that they aren’t excited to cook, and they wouldn’t eat the food themselves. Bryan then says that the staff does not want to change the menus, but Cheryl does not have an answer to why they will allow the chefs to make changes. Clearly, Gordon has his work cut out for him.

Flamango’s was renamed to The Junction Restaurant and Bar, but a renaming was not enough to save it. The restaurant closed down, no thanks in part to its lackluster menu and shoddy chefs. Gordon attempted to rebrand the menu to include more traditional American cuisine, although this was later sabotaged by Adele as she un-did several changes that Gordon made. Flamango’s/The Junction was closed down in April of 2011, and shortly after, The Rail at Readington opened in the same location. Prior to closing, The Junction had an okay 3.5-star review on Yelp across 6 different reviews.