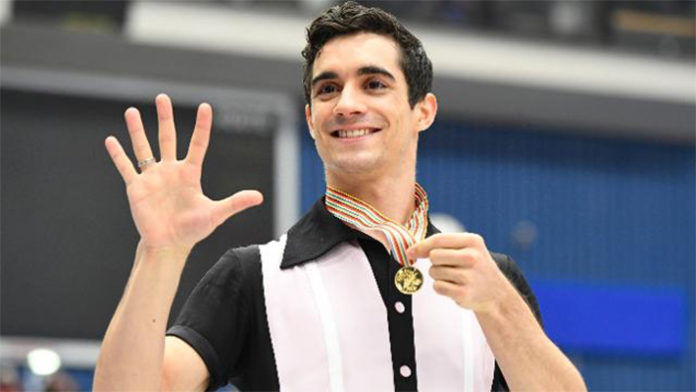 Representing Spain, Javier Fernandez has won a number of competitions on the international level. Not only is he an eight-time Spanish National champion, but he has also received a number of gold medals at the Grand Prix Finals and World Championships. In fact, he is the first Spanish skater to finish on the podium at a Grand Prix event/ISU Championship.

The second male skater to break the 100-point mark in the SP, he represented Spain at both the 2010 and 2014 Winter Olympic Games. For his accomplishments, he was honored with a Gold Medal of the Royal Order of Sports Merit by the government in 2016.

How is the professional skater doing for himself nowadays? How much is one able to make from figure skating? How wealthy is the former Olympian? Unfortunately, information on Javier Fernandez’s net worth is not available at this time. Since we’re here talking about him anyway though, let’s go over some of his greatest career accomplishments so far.

How did Javier Fernandez Make His Money & Wealth?

Born on April 15, 1991, in Madrid, Spain, Javier Fernandez started skating at the age of six, not long after his older sister, Laura, began to take lessons. Initially, he also played a number of other sports such as hockey, tennis, and soccer; it wasn’t until he was eight years old that he decided to focus solely on skating. One of the earliest coaches that he had worked with was Carolina Sanz.

With determination and hard, work, Fernandez quickly moved up the ranks as a skater. By the 2006-07 season, he was competing on the senior level. Still, it wasn’t until a few years later that he received his first assignment at the Grand Prix, where he finished eleventh overall. From there, he took part in the 2010 European Championships, where he was eighth.

That same year, he had the opportunity to represent Span at his first Winter Olympics in Vancouver. The first male skater in half a century to have ever done so, he placed 14th overall after coming in 16th in the SP and 10th in the FS.

Following the Olympic games, Fernandez went straight back into training for the Cup of Russia and Skate Canada International events. Not long afterward, he successfully landed two quadruple jumps at the 2011 World Championships, which earned him a spot at the 2012 World’s event.

Since then, he has won numerous gold medals- most of which came from the European Championships. In fact, he had just recently received his fifth consecutive gold at the 2018 event, which took place in January in Moscow, Russia. Aside from that, he has also scooped up several awards at the World Championships and Grand Prix Final.

As far as the 2017-18 season goes, he kicked it off with a stellar performance at the Skate Canada International, which landed him in second place behind Yuzur Hanyu. Since then, he has also competed at the Japan Open, Cup of China, and Spanish Nationals.

In fact, he will be taking part in the 2018 Winter Olympics, his last Olympic Games, later this Month.

As far as we know, Javier Fernandez is currently single.

Does Javier Fernandez Have Any Children?

Did Javier Fernandez Go to College?

As far as we can tell, Javier Fernandez has not gone to college. At this time, it’s unclear what he has planned following his retirement from figure skating.

What is Javier Fernandez Famous For?

As a figure skater, Javier Fernandez has won numerous competitions including the Spanish National Championships, World Championships, and European Championships. In 2010 and 2014, he also represented Spain at the Winter Olympics.

Originally from Spain, he has been training in Toronto, Ontario since the summer of 2011. Photos of his location are not available at this time.

What Kind of Vehicle Does Javier Fernandez Drive?

Information on Javier Fernandez’s vehicle is unavailable at this time.

How Much Money Did Javier Fernandez Make Last Year?

This January, he competed at the 2018 European Championships, where he won gold. Later on, he will also be participating in his last Olympic Games in PyeongChang, South Korea.