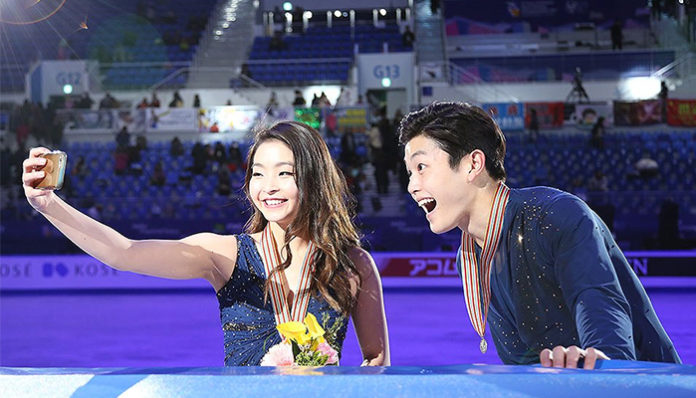 Partnered with her brother Alex, Maia Shibutani has won numerous titles as an ice dancer. Not only did the pair represent the United States at the 2014 Winter Olympics, but they have also won the Skate America Championships, US National Championships, and the Four Continent Championships, several times in the past.

Most recently, the siblings made their 2017-18 debut at the Rostelecom Cup, which was held in Moscow. From there, they competed at the 2017 Skate America event, where they finished first. With that, they qualified for the Grand Prix Final, which took place in Nagoya, Japan.

As a professional athlete, how much does Maia Shibutani make? How lucrative is a career in ice dance? How much has the skater managed to bank over the years? Unfortunately, we currently do not have any information on Maia Shibutani’s net worth as it’s still under review. Since we’re here though, let’s take this opportunity to learn a bit more about some of her accomplishments on the ice.

How did Maia Shibutani Make Her Money & Wealth?

Born on July 20, 1994, in New York City, Maia Shibutani started skating at the age of four. Alongside her older brother, Alex, she was coached by Slavka Kohout Button for several years, prior to moving to Colorado Springs with her family in the mid-2000’s. By the time she was ten years old, she and her brother had partnered up for the ice dance discipline.

Just a year later, they moved up to the intermediate level. Working with Tom Dickson and Judy Blumberg, they won several competitions that year including the Southwestern Regional Championships, which earned them a spot at the 2006 US Junior Championships. Though they finished second in the free dance, they ultimately won the overall title with a first-place finish in compulsory dance.

From there, the siblings eventually made their international junior debut at the 2008 ISU Junior Grand Prix event which took place in France. After winning the gold medal, they competed at the 2009 US Championships, where they finished in second place.

Continuing to compete, they advanced to the senior level for the 2010-11 season. Though they finished fifth at their international debut (i.e. 2010 Nebelhorn Trophy), they eventually managed to win the bronze medal at the NHK Trophy event.

With more experience under their belt, their performance as only improved in the recent years. Since the early 2010’s, the Shibutanis have continued to gather several medals at events such as Skate America, the NHK Trophy, US Championships, and Cup of China, to name a few.

Most recently, they made their 2017-18 season debut at the 2017 Rostelecom Cup event with a gold medal, after finishing first in both dance events. Since then, they’ve also won the 2017 Skate America competition, which qualified them for the Grand Prix Final, where they ended up winning a second bronze medal.

As far as programs go, the pair have been skating to Mambo No. 5, Paradise, Mambo Jambo, and Cherry Pink this season.

As far as we know, Maia Shibutani is currently married and not in a relationship.

Does Maia Shibutani Have Any Children?

No, Maia Shibutani does not have any children.

Did Maia Shibutani Go to College?

In the fall of 2012, she began studying at the University of Michigan.

What is Maia Shibutani Famous For?

A professional ice dancer, Maia Shibutani has been competing with her brother Alex, since she was ten years old. Together, the pair will be representing the United States at the 2018 Winter Olympics.

She currently lives in Ann Arbour, Michigan, where she continues to train alongside her brother, Alex. Further details are not available.

What Kind of Vehicle Does Maia Shibutani Drive?

Information on Maia Shibutani’s vehicle is unavailable at this time.

How Much Money Did Maia Shibutani Make Last Year?

As mentioned earlier, she and her brother will be competing in their second Winter games at the 2018 Winter Olympics held in Pyeongchang, South Korea later this month.

Prior to that, they had medalled at both the Grand Prix Final and Rostelecom Cup events earlier this year.

Want to support the ice dancer on social media? You’ll be happy to know that she’s on a few platforms- for instance, you can find Maia Shibutani on Twitter at @MaiaShibutani or on Instagram at @MaiaShibutani. On Facebook, she also has an official fan page which you can visit by clicking here.