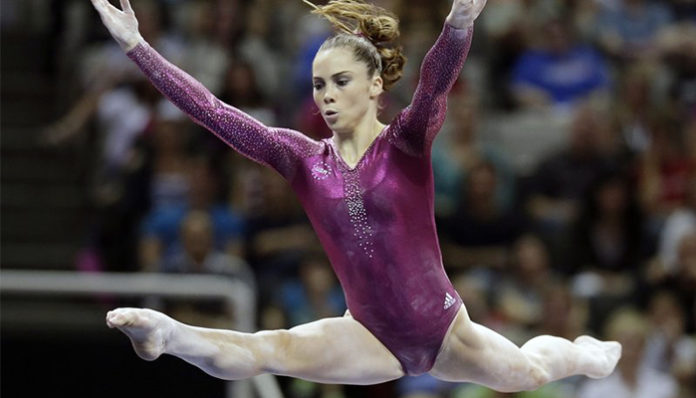 A former artistic gymnast, McKayla Maroney won gold in the team event at the 2012 Summer Olympics. Throughout her career, she competed at several events including the World Championships, National Championships, U.S. Classic, and City of Jesolo Trophy. In 2016, she announced that she would be retiring from the sport.

Outside of gymnastics, Maroney has also been involved with other endeavors- for instance, she made her acting debut in the TV series, Hart of Dixie in 2012. Some of the other shows that she’s appeared in include Bones, and Superstore. In 2016, she also launched her music career with a single titled, Ghost.

With how popular she is as a former athlete, surely she has her share of endorsements and the like? How is the twenty-something doing for herself nowadays? To answer that- not badly at all. From our research, McKayla Maroney’s current net worth hovers around the $4 million mark. Where do most of her income come from? How many streams of income does the brunette have? Let’s take a look at some of these answers below.

How did McKayla Maroney Make Her Money & Wealth?

Born on December 9, 1995, in Aliso Viejo, California, McKayla Maroney has been involved with gymnastics ever since she was two years old. By the time she was nine, she had started to train at Gym-Max in Costa Mesa. Even as a young girl, she had aspired to one day, compete with the Olympic games.

By the time she was in her early teens, she was competing on the junior level. Between 2009 and 2010, Maroney participated in several events including the Visa Championships, CoverGirl Classic, and Pan American Championships, to name a few.

With more training, she eventually made her senior debut in 2011. From there, she successfully petitioned to compete at the Olympic Trials. During the event, she placed first on a vault and fifth on the floor; not long afterward, she was selected to represent the United States at the 2012 Summer Olympics.

In the end, Maroney won the silver medal in the vault final, with a score of 15.083. Following the event, she was photographed on the podium with a brief look of dissapointment- this photo would eventually go viral as an internet meme.

Following the 2012 Summer Olympics, she continued her competitive career for a few more years, prior to announcing her retirement in 2016.

Aside from her gymnastics career, Maroney has also appeared in a few television series. In fact, while she was still competing, she played a recurring character in the CW comedy-drama, Hart of Dixie. Since then, she has also made brief appearances in the shows Bones and Superstore.

Speaking of TV appearances, she has also been invited onto many talk shows over the past years such as Big Morning Buzz Live, Good Morning America, Late Show with David Letterman, Today, and Big Brother.

In 2012, Maroney also appeared in the popular dancing competition series, Dancing With the Stars.

As far as we know, McKayla Maroney is currently single and not in a relationship.

Does McKayla Maroney Have Any Children?

Did McKayla Maroney Go to College?

Due to her training schedule as a competitive gymnast, McKayla Maroney did not go to college.

What is McKayla Maroney Famous For?

As a gymnast, McKayla Maroney is perhaps best known as a member of the “Fierce Five” at the 2012 Summer Olympics in London.

Following the event, a photo of her “unimpressed expression” also went viral on the internet as a meme.

She currently resides in her hometown in Laguna Niguel, California. Unfortunately, further information is not available at this time.

What Kind of Vehicle Does McKayla Maroney Drive?

Information on McKayla Maroney’s vehicle is unavailable at this time.

How Much Money Did McKayla Maroney Make Last Year?

Looking at her IMDb page, she hasn’t appeared on television since 2016. Last year however, headlines were made after she posted a video of herself dancing in a thong on social media, which ultimately led to criticism online.

As far as other things go, she revealed in October 2017 that she had been one of the victims of USA Gymanstics doctor Larry NAssar’s sexual harassment for many years.

As far as we can tell, McKayla Maroney is currently not active on Twitter on Instagram (though she had been in the past). If you’d like to support her, you can give her a like on her official Facebook fan page, which you can visit by clicking here.