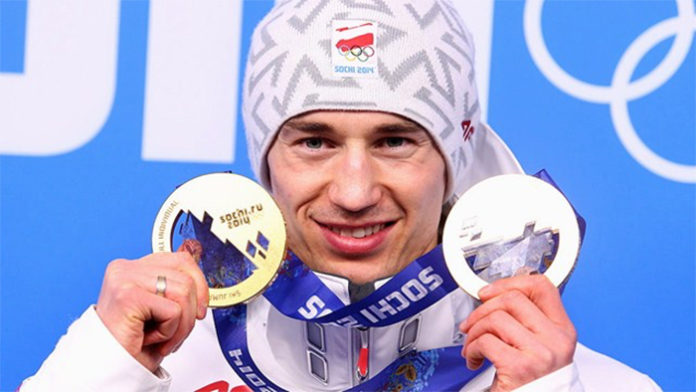 A Polish ski jumper, Kamil Stock is one of the most successful athletes from Poland. A three-time Olympic champion, he has also won the World Championship title two times in the Team and Individual Large Hill events. Today, he is the second ski jumper in history, to have ever won the grand slam title in all four events in a Four Hills Tournament.

Not only did he represent Poland at the 2014 Winter Games in Sochi (where he successfully won two golds), but he recently also took part in the 2018 Winter Olympics in Pyeongchang. An overall success for the ski jumper, he ended up taking home one gold, and one bronze medal.

With all that said, how successful is the Polish athlete now? How much has he banked over the years from endorsements and the like? Unfortunately, we currently do not have any information on Kamil Stoch’s net worth. Since we’re here though, let’s dive a little deeper into looking at his career so far.

How did Kamil Stoch Make His Money & Wealth?

Born on May 25, 1987, in Zakopane, Poland, Kamil Stoch is the son of Bronislaw and Krystyna Stoch. Raised in the village of Zab, he has two older sisters named Natalia, and Anna. Like most professional athletes, he began skiing at a young age, when he was just three years old. Falling in love with the sport almost immediately, he eventually started ski jumping.

At the age of nineteen, he participated in the Ski-flying World Championships held in Kulum, where he finished in 35th place. Later that same year, he took part in his first Winter Olympics in Turin, Italy. After qualifying for the finals in the Large and Normal Hill events, he finished 26th and 16th respectively.

Continuing to train and compete, he went on to win the Polish Championships and World Cup Summer Grand Prix in 2007. Three years later, he represented Poland at the 2010 Winter Olympics held in Vancouver, Canada. Though he qualified for the finals, however, he ultimately did not finish on the podium.

Ultimately, it wasn’t until 2014 that he proved himself to be a worthy contender at the Winter Olympics. That year, he surprised everyone by winning two gold medals in Sochi- one for the Large Hill and another for the Normal Hill event. With that, he became the first Polish ski jumper to win gold since 1972.

Not long afterward, it was announced that he had been appointed to represent his country at the 2018 Winter Games. After finishing in fourth place at the NH event, he successfully won gold at the LH event. His third Olympic Champion title, he later won another bronze medal at the Team Long Hill event.

Since 2010, the Polish skier has been married to his wife, Ewa Bilan.

Does Kamil Stoch Have Any Children?

As far as we can tell, Kamil Stoch does not have any children.

Did Kamil Stoch Go to College?

A few years after finishing high school, he attended the University School of Physical Education in Krakow; he has since received a master’s degree in physical education.

What is Kamil Stoch Famous For?

As a ski jumper, he is one of the most successful athletes from Poland. Not only has he won three gold medals at the Winter Olympics, but he’s also earned himself two World Champion titles.

Kamil Stoch currently lives with his wife in Poland. Further details are unavailable at this time.

What Kind of Vehicle Does Kamil Stoch Drive?

Information on Kamil Stoch’s vehicle is unavailable at this time.

How Much Money Did Kamil Stoch Make Last Year?

Information on Kamil Stoch’s annual earnings for 2017 is not available.

As mentioned already, Stoch most recently won two medals at the 2018 Winter Olympics, including a gold in the individual large hill event. Earlier this year, he also won a silver and a bronze medal at the Ski Flying World Championships.

Want to support the skier? If so, how about following Kamil Stoch on social media? While he isn’t active on Twitter, you can find him on Instagram at @KamilStochOfficial. On Facebook, he also has an official fan page which you can check out by clicking here.