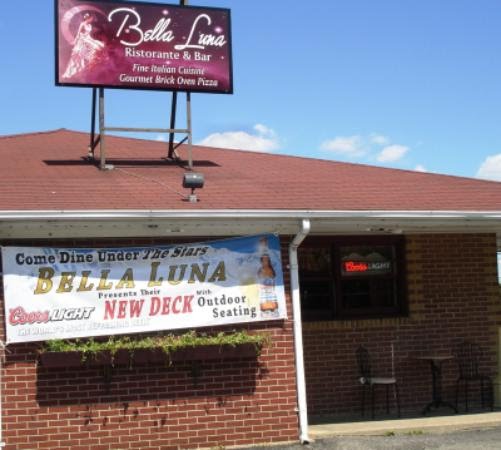 Easton, Pennsylvania, is located an hour away from Philadelphia. Just outside of downtown Easton is Bella Luna, an Italian restaurant owned by Rosaria Scollo. She bought the restaurant in 2010 for her two sons, Maurizio and Gianfranco. Her son, Gianfranco, went to culinary school, and one of his dreams was to own his own restaurant. So, they found a place and took a chance.

However, the family feels that the community has not responded to them the way that they thought. Maurizio feels that they do not appreciate fine Italian cooking. Some of the customers speak their mind, saying that they don’t think they will ever give Bella Luna a second chance. Bella Luna is in a state where they don’t have much business at all, and there are days where they close early or don’t open for lunch. People of Easton like mediocre Italian food, like frozen foods, which is not what the kitchen does.

Gianfranco studied in Italy and worked with chefs, so he knows what Italian food is. However, clips are shown of food always being sent back to the kitchen. Rosaria is unsure of what they are doing wrong, and that’s the big question she asks herself every day. Bella Luna looks like a morgue, according to manager Tracy. When you walk in, Tracy thinks “where is the viewing? Where is the body laid out?” It’s actually quite true – tacky decorations line the walls of Bella Luna, along with obviously fake popery and other trinkets.

Rosaria is very disorganized, according to Tracy. When she is needed on the floor, she will be in the kitchen. Worse, she is not a leader – when people are running around, she also loses her calm composure. Tracy is insistent that Bella Luna should be on the radar for good Italian food in Easton. If Bella Luna has to close, Rosaria will be so disappointed because of how hard the family has worked to make their dream a reality – it would kill her inside.

Gordon Ramsay arrives at the front of Bella Luna in a conspicuous black Cadillac Escalade. Tracy almost sprints out the door to greet Gordon the second he steps out of his car. Gordon asks if Tracy is the owner, but she is just the manager. She explains that Gianfranco is the head chef, and Maurizio is the head bartender. Both of them are the sons of Rosaria Scollo, who owns the restaurant. Gordon jokes if Tracy greets customers before they exit the car, but she replies that he also smells good.

Gordon then gets serious and asks Tracy how bad the family really is, on a scale of one to ten. Her answer is “negative two.” Gordon curses and Tracy elaborates – they are very stubborn, and Rosaria coddles Gianfranco. If somebody sends a plate back, she’ll defend the son instead of saying that the customer is always right. None of the locals are biting, and Tracy feels that the place should be banging. In fact, she runs a Fifty Shades of Grey Bingo on Thursday nights. Gordon asks for elaboration. Essentially, this is adult bingo (with no handcuffs involved, although they could be if Gordon wants.) They try and do anything possible to get customers in the door. 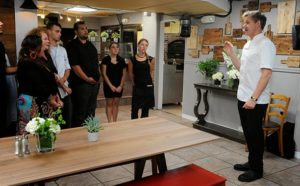 Gordon and Tracy finally step inside the restaurant, which looks like an old nursing home kitchen. Gordon asks if it is Christmas, although they are in the middle of July. So, the decorations are out for Christmas in July. Rosaria finally meets Gordon and asks to give him a hug and a kiss since she’s Italian and that’s what Italians do. Gordon and Rosaria sit at the bar and Gordon asks her some questions. She has been open for three years, and Rosaria does not have any experience with owning her own restaurant, and neither do her sons. They all have a passion for food, and since Gianfranco went to school and wanted to become a chef, Bella Luna was their dream.

Gianfranco does not have restaurant experience. When he finished school, he did an internship in Manhattan. After that, they jumped in there. Gordon is flabbergasted, as an internship to ownership is a huge step. There was no intermediary experience, although the family did have a vision. They followed that vision. Rosaria is insistent that their food is more authentic than other places, as they make everything fresh and not frozen. They only have one freezer. This is the way that they want it to be. So, why isn’t Easton supporting that? Rosaria can only guess that they’re used to frozen food.

Rosaria is delusional, as she thinks that the food is not the problem, but the community is. Gordon also meets Maurizio and Gianfranco. He asks if there are any issues between him and his mother running the restaurant, and the biggest issue the two have is communication. They are both bosses together, but sometimes he does not agree and she does not agree. The food ranks at about an eighth, according to Gianfranco. With that said, Gordon is shown to a table and given menus for the bar, lunch, and dinner. 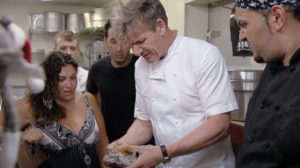 The first thing Gordon notices is that the menus include a specialized message for the patrons of Bella Luna. He places an order for the veal saltimbocca, the penne alla vodka, and some mussels with marinara. Gianfranco already looks stressed in the kitchen, although the staff begins to put the meal together. While the food cooks, Gordon calls over waitress Nicole and asks her how her tenure has been. The management is unfocused and there is a lot of name-calling and disrespect, all of which stems from the kitchen.

The first item to arrive is the veal saltimbocca. Gordon digs in after saying that the food looks hideous and inedible. It’s bland, chewy, and the crap has been beaten out of it. The food is disgusting. Gianfranco has done everything wrong to prepare the veal, it seems. Gordon sends the overcooked meat (that’s been caked with flour) back to the kitchen. The penne alla vodka comes out next, and Gordon asks why it’s drowned with sauce. He takes a bite, although it has the consistency of baby vomit. The sauce is disgusting, and Tracy explains that this is what she means by inconsistencies. The penne alla vodka is sent back after only a few bites. The mussels arrive at Gordon’s table, although they are all soupy and slimy looking. Gordon does not eat it out of fear of getting sick and sets to work to right the wrongs with Bella Luna.

Bella Luna closed, and with a horrible 1.5-star review (across only 8 reviews!) on Yelp, it’s easy to understand why. They closed down in late 2013, with most complaints aimed at the inconsistent menu. Several customers complained that they arrived at 6:00, although they were sold out of specials by 6:45. The service was acceptable, the pizza was good, although most of the other food was horrible. One customer puts it best – “to call this an Italian restaurant is a crime by all accounts.”