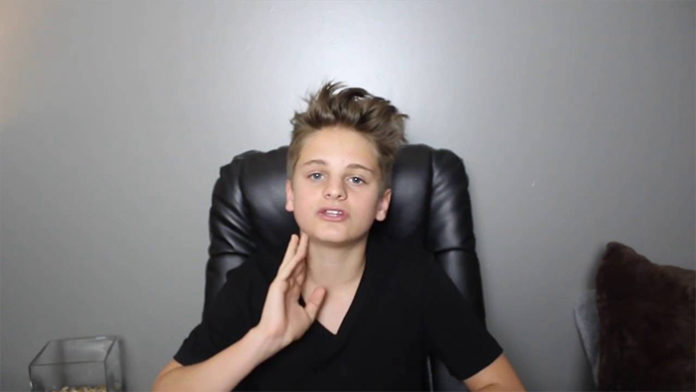 A social media star, Mark Thomas first established himself on the music network, Musical.ly. Incredibly popular, his videos have since gained him over 5 million followers the platform. As if that wasn’t impressive enough, the teen is also widely known for other social apps such as Instagram, Twitter, and Facebook, to name a few.

Aside from his online endeavors, he has recently also launched a music career. In 2016, he released his first singles titled, Mistletoe, and Selfie, both of which were met with critical acclaim. From there, it wasn’t long before he came out with his debut EP, Down For a While in 2017.

With all that he has going for him, how successful- or well off- is the 16-year-old? Has he managed to rack up a decent amount of savings? How rich is he? From what we can gather, Mark Thomas currently has an estimated net worth of $100,000. Where did the bulk of this money come from? What are his greatest sources of income? Why don’t we try to answer some of these questions below?

How did Mark Thomas Make His Money & Wealth?

Born in Pennsylvania on March 29, 2001, Mark Thomas grew up with his older sister, Mullaney in the town of Stewartstown. Growing up living on his parents’ farm, he originally aspired to become an author; it wasn’t until later in his teens that he decided to get involved with social media. In his spare time, he enjoys playing sports such as soccer with his friends.

Like many teens, Mark got into social media in the early 2010’s. For instance, one of the first platforms that he’d joined was Twitter, back in 2012 (though he didn’t start tweeting until 2015). Around that same time, he also established himself on Musical.ly, a popular lip-syncing app, and Vine, a six-second video sharing app; before long, he had gained himself well over a million followers on the two combined.

Later in 2014, he joined YouTube under the name Duhitzmark. Like his Twitter account, however, it went bare for many years, before he started to post videos in 2017. Despite its relative inactivity though, it has already gained more than 780,000 subscribers with more than 17.3 million combined views. To date, his most popular upload is a cover of Justin Bieber’s hit song Mistletoe, with close to 7 million views.

Aside from his various online ventures, the teen has also been making strides as a recording artist. In 2016, he released his first two singles, Selfie, and Mistletoe. Met with positive reviews, it was later followed by his debut EP, Down For a While in 2017. A three-track project, it boasted Down For a While, Side Chick, and Turn Up (feat. Chris Miles).

Since then, he has released a few additional tracks including Used to Have You, which was made available on December 22, 2017. On Soundcloud alone, the song has been streamed close to 20,000 times. Does he have any other albums planned for later this year? We’ll just have to wait and see for now.

No, he is not married. In fact, Mark Thomas does not have a girlfriend, as far as we know.

Does Mark Thomas Have Any Children?

No, the teen does not have any children.

Did Mark Thomas Go to College?

Currently, still in high school, Mark Thomas still has a few years ahead of him before he has to worry about graduation. For now, it’s unclear what he has planned for the future.

What is Mark Thomas Famous For?

Mark Thomas originally rose to fame on the popular social platforms, Musical.ly, and Vine. Since then, he has also made a name for himself as a recording artist, with a handful of singles under his belt.

Mark Thomas currently resides with his family in Stewartstown, Pennsylvania. Unfortunately, further information on his dwelling is unavailable at this time.

What Kind of Vehicle Does Mark Thomas Drive?

Information on Mark Thomas’ vehicle is unavailable at this time

How Much Money Did Mark Thomas Make Last Year?

Information on Mark Thomas’ 2017 salary is unavailable at this time.

As mentioned earlier, the teen most recently released his latest single, Used to Have You in December 2017.

If you’d like to stay up-to-date with the teen star, why not follow him on social media? You can find Mark Thomas on Twitter (@duhitzmark) or on Instagram (@duhitzmark). Alternatively, he has an official FB fan page which you can visit here.