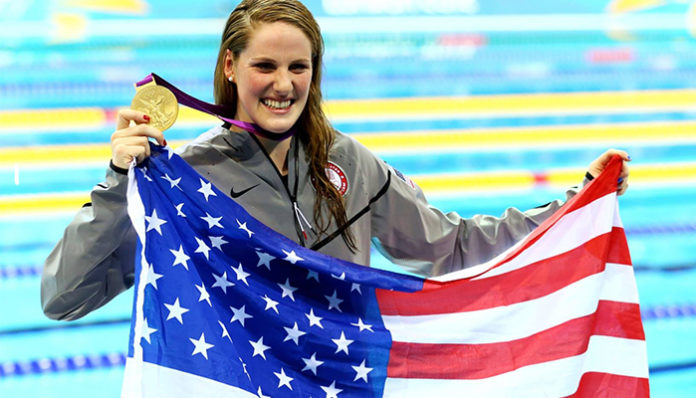 An American competitive swimmer, Missy Franklin has represented the United States in numerous events. A world record holder, she made her Olympic debut at the age of 17 at the 2012 Summer Olympics in London. A crowd favorite, she ended up winning a total of five medals, four of which were gold.

Outside of her swimming career, Franklin has appeared on television numerous times (which isn’t too surprising for an athlete of her status). Not only has she appeared in the popular drama, Pretty Little Liars, but she has also taken part in documentaries such as Touch the Wall and Bystander Revolution.

With all that said, how successful is the athlete financially? How rewarding has her competitive career been for her so far? Does she have herself any endorsement offers? From our research, Missy Franklin’s current net worth is around the $3 million mark. Where did the Olympic champion earn most of this amount from? What are her greatest sources of income? We’ll be trying to answer these questions below.

How did Missy Franklin Make Her Money & Wealth?

Born on May 10, 1995, in Pasadena, California, Missy Franklin originally took up swimming, as her mother wanted her to be comfortable with water. Thus under her urging, she started swim classes at the age of five. Over time, however, the hobby grew into something much greater- by the time she was seven, she had become a member of the Colorado Stars travel swim team. Still, it wasn’t until others started to make note of her natural talent, that her parents began to realize her potential.

At the age of thirteen, she participated in the 2008 US Olympic Team Trials. Despite her best efforts, however, she did not manage to qualify for the subsequent Summer Olympics.

After passing the London Summer Olympic trials in 2012, Franklin qualified for four individual swimming events at the games, which were to take place in London. In total, she won four gold medals- two for backstroke, one for freestyle, and another for the 4x100m medley.

Following the Olympics, she competed in the 2013 World Championships, where she successfully finished first in the 100m and 200m freestyle and backstroke events.

Like most Olympic champions, Franklin has her fair share of endorsement deals. For instance, it was announced that she had signed with Speedo in 2015. At one point, it’s said that she was even offered $5 million in sponsorships- though she ultimately turned them down to go to college instead.

As far as other things go, the swimmer has also appeared on television several times. For instance, she had made a guest appearance in an episode of Pretty Little Liars back in 2013. In 2014, she was also featured in a documentary titled, Touch the Wall, which chronicled her journey to the 2012 Summer Olympics in London.

As far as we know, Missy Franklin is currently single and not married.

Does Missy Franklin Have Any Children?

No, Missy Franklin does not have any children.

Did Missy Franklin Go to College?

In 2012, she started to attend the University of California, Berkeley, through an athletic scholarship.

What is Missy Franklin Famous For?

As a competitive swimmer, Missy Franklin has earned herself a fair reputation with five Olympic gold medals and a handful of world records.

Not only that, but she’s also won a number of medals at the Pan Pacific Championships and World Championships.

Missy Franklin currently resides in California. Photos of her house are unavailable.

What Kind of Vehicle Does Missy Franklin Drive?

Information on Missy Franklin’s vehicle is unavailable at this time.

How Much Money Did Missy Franklin Make Last Year?

Most recently at the 2016 Summer Olympics, she finished first in the 4 x 200m freestyle relay event. Unfortunately, she had finished seventh in the 200m backstroke and had not made it to the finals.

A fan of the swimming superstar? If so, why not follow her on social media? You can find Missy Franklin on a few online platforms including Twitter at @missyfranklin and Instagram at @Missyfranklin88. On Facebook, she also has an official page which you can visit by clicking here.