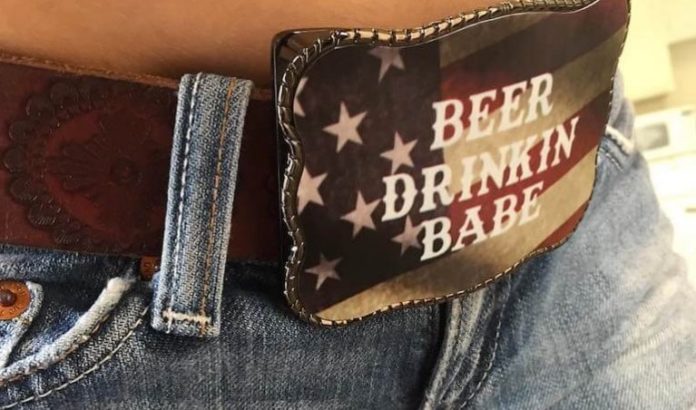 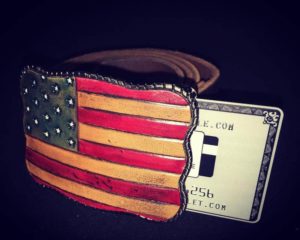 Trevor and Justin Johnson are country enthusiasts who wanted to create a solution to a common problem. Wallets are the standard accessory to hold and store all your money and credit cards, but they are also easy to lose and have a tendency to become extremely cluttered. Trevor and Johnson put their heads together and came up with the convenient Wallet Buckle.

The concept is simple. By combining your standard wallet with a decorative belt buckle, the duo created an accessory that people were sure to love. The Wallet Buckle is a metal belt buckle that can hold up to 5 different cards. They are securely held together and easily accessible, as they are constantly on your person. Additionally, these Wallet Buckles come in a variety of different designs to suit anyone’s fashion preferences.

Wallet Buckle was made possible through a successful Kickstarter campaign. Trevor and Justin were able to raise over $44k from enthusiastic fans. After they were able to launch their business, they began selling their buckles at various country festivals and fairs. People were absolutely loving the product, but Wallet Buckle was going to need some business professionals to help it become a household name. So, what better way to do that than take it to Shark Tank and pitch for an investment?

Brothers Trevor and Justin enter the Shark Tank seeking a $500k investment in exchange for a 10% stake in their business. Right off the bat, the Sharks are surprised by the high valuation of a belt buckle, but the brothers are confident in their ability to convince the Sharks their product is worth it.

They presented their pitch by beginning with the age old “where’s my wallet” dilemma. Thousands of people misplace their wallets, whether it be at a sporting event or simply at the grocery store. They fall out of pockets and are easily misplaced. However, the Wallet Buckle is here to spare everyone from this tragedy.

With a never before seen design, the Wallet Buckle is the most convenient way to store all your credit cards and identification. With one swift motion, you can pull out your card and slide it securely back in place after use. These buckles use tension to keep your cards safe and secure. Whether you store one or five cards in your buckle, you don’t have to worry about them slipping out of place.

As one of their assistants pass around personalized samples for the Sharks, they commend 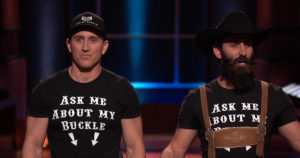 Trevor and Justin for their entertaining pitch. It’s evident that they are a personable duo who are passionate about their business, but do the numbers make the Wallet Buckle worth investing into? Robert Herjavec is the first to ask about what their sales look like.

Wallet Buckle has been in business for nearly 18 months. During that period, they sold an estimated 15k units which translate to almost $500k in sales. However, Trevor attempts to sweeten the pot by telling them that Wallet Buckle is on track to generate $800k by the end of the year.

It costs around $5 to $7 to make one buckle and they sell at retail for $49 each. Their margins are pretty good, but marketing is where they run into issues. Almost 80% of their sales are made at live events, such as concerts and other festivals. This limits their sales to a certain extent, but Wallet Buckle was recently picked up by a popular denim vendor. As a result of this, they are optimistically projecting an expected $2.5 million in sales next year.

Aside from vending at live events, Wallet Buckle also has a kiosk in a Nashville mall. It costs them $67 a day to operate there, but the attention allowed them to partner with the denim brand Buckle. Using some of their profits, Wallet Buckle will be opening a second kiosk in another mall. They hope to have at least 40 different kiosks by the end of June.

Kevin O’Leary is the first Shark to put his two cents in. Although he sarcastically states that he believes the business is worth “$15 million”, it is clear that he has an issue with their business model. Making sales via mall kiosks and spending money to attend various different festivals just isn’t practical. He is not willing to make them an offer. 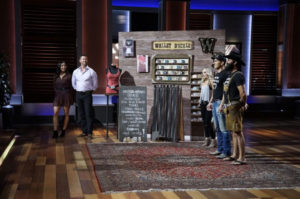 Being on the slightly more optimistic side, Herjavec admits that the Wallet Buckle will make a killing at the venues they are currently selling at. However, this is a product that is also limited. No businessman in a suit is going to find the appeal of this product. That eliminates a huge part of the market and therefore he’s out.

Daymond John loves the product and the way the brothers pitched it. Their passion and friendly demeanor made him want to buy one on the spot. The issue John has with Wallet Buckle is that the only way it’s going to sell is if they have their own store. Putting it in a mass retailer will quickly make it lost within all the other accessories and hard to sell. This issue is the reason why he won’t be making them an offer.

That leaves Lori Greiner and Mark Cuban still in the tank. They both love Trevor and Justin because of the way they pitched the idea. Like the rest of the Sharks though, it seems like the Wallet Buckle is a very niche business that will only appeal to a very small market. It is very unlikely that they will be able to grow this into a multi-million dollar business and therefore it is too risky for both Greiner and Cuban to invest.

With all Sharks now out of the tank, the Wallet Buckle brothers have to walk away without any new investments in their business. 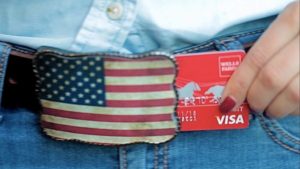 in the Wallet Buckle brand, the business is still operational. They do have a presence on social media and their own website, but it looks like the Sharks were right about one thing. Being that the Wallet Buckle is meant to appeal primarily to country fans and those living in the south, their following is relatively small. Their Twitter account @walletbuckle only boasts 410 followers. However, they do have 29.9k followers on their Instagram account @walletbuckle. In the big scheme of things, this still a relatively small following. It is enough to keep their business afloat though.

If you are interested in purchasing a Wallet Buckle for yourself, you can visit their official website to browse their selection of products and read up on customer reviews.