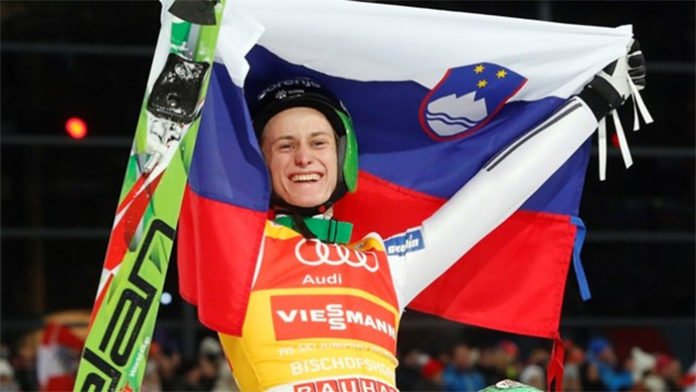 One of the most successfully ski jumpers from Slovenia, Peter Prevc gained widespread attention after winning two medals at the 2014 Winter Olympics. Prior to that, he had also medalled at the World Championships, in the individual large hill, normal hill, and team events. A ski flying specialist, he is the first athlete in history to land a jump of 250m.

Two years after making his Olympic debut, he also won a gold medal at the Ski Flying World Championships in Bad Mitterndorf. More recently, he also helped Slovenia bring home a silver in the team event. Currently, he is a member of the SK Triglav Tranj Ski Club.

Considering his status as a professional athlete, is it wrong to assume that he’s doing fairly well for himself? How well off is the 25-year-old ski jumper? Unfortunately, information regarding Peter Prevc’s net worth is not available at this time. With that said, that doesn’t stop us from going over some of the highlights of his career below.

How did Peter Prevc Make His Money & Wealth?

Born on September 20, 1992, in Kranj, Slovenia, Peter Prevc grew up in the village of Dolenja Vas, where he was raised with his four brothers and sisters. Due to the fact that his father worked as an international ski jumping referee, he was introduced to the sport at a young age. After a period of cross-country skiing, he began training in ski jumping at the Bregarca Ski Jumping Hill.

At the age of seventeen, he competed in his first World Cup, where he finished 22nd overall. Despite the dissapointing finish, he eventually managed to win silver at the individual event at the Junior World Championships in January 2010.

Just a month later, he was named to the Slovenian Olympic Team. At the following Winter Olympic Games held in Vancouver, he finished off the podium in both the individual normal hill and large hill events; together with his teammates, he also placed eighth in the team discipline.

Over the next few years, Prevc continued to take part in several competitions such as the FIS Nordic World Ski Championships, and World Cup events. In the 2011-12 season alone, he had four Top 10 finishes.

In 2014, Prevc represented Slovenia for the second time at the Winter Olympics in Sochi, Russia. Unlike his previous performance in Vancouver, he successfully finished second on the podium at the normal hill event for a silver medal; later, he also won a bronze at the large hill event.

From there, he enjoyed a very successful 2014-15 season. Not only did he win the World Cup three times, but he also had eleven other podium finishes. At the Four Hills Tournament, he also managed to win a bronze medal.

As far as we know, Peter Prevc is not married. With that said, he is in a relationship with a ski instructor named Mina Lavtizar.

Does Peter Prevc Have Any Children?

No, Peter Prevc does not have any children.

Did Peter Prevc Go to College?

Yes, he attended the Faculty of Organizational Sciences in Kranj, a university in Slovenia.

What is Peter Prevc Famous For?

An accomplished ski jumper from Slovenia, Peter Prevc has won several medals over the years, including a bronze and silver at the 2014 Winter Games in Sochi.

Peter Prevc currently lives in Slovenia with his girlfriend. Photos are unavailable at this time.

What Kind of Vehicle Does Peter Prevc Drive?

Information on Peter Prevc’s vehicle is unavailable at this time.

How Much Money Did Peter Prevc Make Last Year?

Information on Peter Prevc’s annual earnings for 2017 is not available.

As mentioned earlier, Prevc did take part in the World Cup for the 2017-18 season, though he ultimately finished off the podium.

Want to follow the Slovenian athlete on social media? If so, be sure to check out his Twitter and Instagram accounts at @PeterPrevc and @Pprevc respectively. On Facebook, he also has an official fan page which you can visit by clicking here.