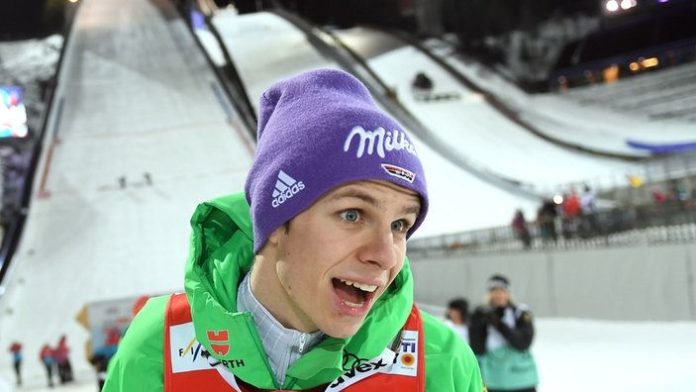 A talented ski jumper, Andreas Welling most recently represented Germany at the 2018 Winter Olympics, where he won a gold model in the individual normal hill event (on top of two silvers in the team and individual large hill). Speaking of the Winter Games, he had also helped to bring home a gold medal in the team event at the 2014 Winter Games in Sochi, four years prior.

Aside from his accomplishments at the Winter Olympics, the 22-year-old has also medalled at the World Championships. In fact, he had finished first on the podium in the mixed NH at the 2017 World Championships in Lahti. In addition to that, he had also won two silvers in the individual NH and LH events.

How much is one capable of earning as a ski jumper? How lucrative is such a career? How much has the twenty-something made over the years? Unfortunately, we do not have Andreas Wellinger’s net worth available at this time. In the meantime, however, let’s take a more detailed look at his accomplishments as an athlete.

How did Andreas Wellinger Make His Money & Wealth?

Born on August 28, 1995, in Ruhpolding, Germany, Andreas Wellinger began skiing at a young age. Still, it wasn’t until he was eleven years old that he began to focus on ski jumping. By the time that he was seventeen, he had managed to secure a spot at the inaugural Winter Youth Olympic Games, which took place in Innsbruck, Austria. In the end, he managed to win a gold medal in the mixed team event.

That same year, he also made his debut at the FIS Ski Jumping World Cup. Though he originally led after the first round, he later dropped to fifth place following the second round. Despite that, he eventually managed to finish on the individual podium twice in Engelberg, and Sochi.

Continuing his winning streak, he went on to win the Grand Prix Ski Jumping competition in 2013, after scoring ahead of Jerneg Damjan. From there, he also finished in second place in Klingenthal.

Following another win in Wisla, he was named to the German Olympics Team for the 2014 Winter Games. His first time representing the country at the Olympics, he went on to win a gold medal with Germany in the team event, after placing sixth on the individual small hill.

Fast forward to 2018, and he has once again made the cut for the Winter Olympics in PyeongChang, South Korea. Representing Germany for the second time, he triumphed at the event with a gold medal in the individual NH. From there, he also won a silver medal in the men’s individual LH jumping event. As part of Team Germany, he had also helped to win a silver in the team event.

Aside from his accomplishments at the Olympics, he had also won a gold medal at the 2017 World Championships earlier this season. In doing so, he would have also received a fair amount of prize money (though the exact amount has not been disclosed).

As far as we know, Andreas Wellinger is not married. The last that we’d heard, however, he did have a girlfriend.

Does Andreas Wellinger Have Any Children?

No, Andreas Wellinger does not have any children as far as we know

Did Andreas Wellinger Go to College?

As far as we can tell, Andreas Wellinger has not attended college.

What is Andreas Wellinger Famous For?

As a ski jumper, Andreas Wellinger is perhaps best known for his accomplishments at the Winter Olympic Games. Most recently in PyeongChang, he won three medals, including a gold in the individual normal hill. Four years earlier, he had also won a gold medal in the team large hill event.

Andreas Wellinger currently lives in Germany. Photos of his house are not available.

What Kind of Vehicle Does Andreas Wellinger Drive?

How Much Money Did Andreas Wellinger Make Last Year?

Information on Andreas Wellinger’s annual earnings for 2017 is not available.

As mentioned previously, the 22-year-old most recently represented Germany at the 2018 Winter Games in PyeongChang, where he won a gold medal on the individual normal hill.

Want to support the Olympic athlete? If so, how about following him on social media? You can find Andreas Wellinger on Twitter at @Andy_Wellinger or on Instagram at @Andreaswellinger. On Facebook, he also has an official fan page which you can visit here.