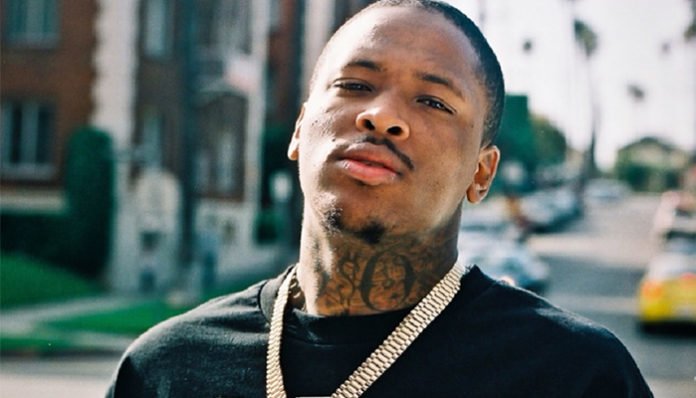 Keenon Jackson, better known as YG, rose to fame with his debut single, Toot It and Boot It (Feat. Ty Dolla Sign) in 2009. Since then, the twenty-something has dropped a number of records, including the albums, My Crazy Life, Blame it On the Streets, and Still Brazy.

Aside from his music career, he has also appeared in a few movies. For instance, he had worked on the titles We the Party, White T, and Mac & Devin Go to High School. In 2014, he also produced and starred in a short film called, Blame it On the Streets, in support of his second album.

With all that said, how much has he banked over the years? How successful is his music career? How wealthy is the 27-year-old? From our research, Keenon Jackson’s current net worth is around the $3 million mark. Where did he make this money from? We’ll be taking a look at this question down below.

How did Keenon Jackson Make His Money & Wealth?

Born on March 9, 1990, in Compton, California, Keenon Jackson has been making music ever since his teen years. In 2009, he released the track, Toot It and Boot It online, which gained him a significant amount of attention. In fact, its success ultimately led him to sign to Def Jam Recordings later that same year.

Over the next few years, the rapper released several mixtapes including The Real 4Fingaz, Just Re’d Up, and Young and Hung…Over. Though the projects caused his popularity to climb, it wasn’t until the release of his debut album in 2014 that he gained widespread attention.

That year, he dropped his first full-length project, My Krazy Life in March 2014. Supported by four singles, the album featured a number of guest appearances from Lil Wayne, Kendrick Lamar, Nicki Minaj, and Drake, to name a few. Met with positive reviews, it entered the Billboard 200 at number two, with over 61,000 sales in the first week. A few years after its release, the album went platinum in the United States.

His most successful album to date, it was later followed by Still Brazy in 2016. Packed with 17 tracks, the playlist included many collaborations with artists such as Sad Boy, Slim 400, Lil Wayne, and Drake. A decent success, it debuted at number six on the Billboard Top 200, with 40,000 first week sales. Outside of the United States, it also charted in Canada, Australia, Belgium, and the UK.

Aside from the two albums, the rapper had also put together a soundtrack album called, Blame It On the Streets, for his short film of the same name in 2014. A nine-track project, it went on to chart on both the US Billboard 200 and the Top R&B Albums Chart.

Aside from what he makes from his albums and mixtapes, he’s also worked on a few films over the years. For instance, he had made appearances in the titles We the Party, White T, and Mac & Devin Go to High School. Of course, there’s also his short film, Blame It On the Streets, as mentioned previously.

As far as we can tell, he is not married nor in a relationship at this time.

Does Keenon Jackson Have Any Children?

Keenon Jackson does not have any children that we know of.

Did Keenon Jackson Go to College?

From the looks of it, the rapper did not attend college.

What is Keenon Jackson Famous For?

Keenon Jackson rose to fame with the release of his debut single, Toot It and Boot It (Feat. Ty Dolla Sign) in 2009, which landed him a record deal with Def Jam Recordings. Since then, he has dropped several other projects, all of which are well received by fans.

Originally from Compton, Keenon Jackson currently lives in Los Angeles, California. Photos of his house are not available.

What Kind of Vehicle Does Keenon Jackson Drive?

Information on Keenon Jackson’s vehicle is unavailable at this time.

How Much Money Did Keenon Jackson Make Last Year?

Information on Keenon Jackson’s annual earnings for 2017 is not available.

Currently, the rapper is working on a third studio album titled, Stay Dangerous. So far, an official release date has not yet been announced.

Want to support the rapper online? How about following him on social media? You can find Keenon Jackson on Twitter at @KeenonJackson6. As far as we can tell, he does not have an official fan page on Facebook.