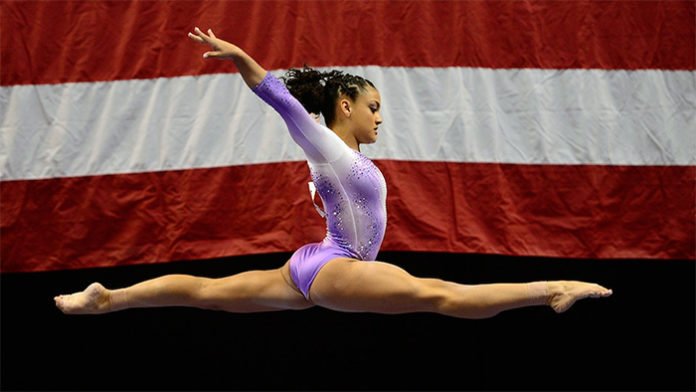 An artistic gymnast, Laurie Hernandez was a member of the U.S. Women’s gymnastics team at the recent 2016 Summer Olympics in Rio. Not only did she win a silver medal on the balance beam, but she had also contributed to the team’s gold medal. That same year, she medalled at the City of Jesolo Trophy, National Championships, and Pacific Rim Championships.

Since her rise to fame, she has also appeared in a handful of television programs. For instance, she had competed on the 23rd season of Dancing with the Stars in 2016. Partnered with Valentin Chmerkovskiy, she eventually became the show’s youngest winner, at the age of sixteen.

How is the Olympian doing for herself nowadays? How rewarding has her career been- both in and out of the gym? Putting it bluntly, how rich is she? From our research, Laurie Hernandez’s current net worth hovers around $2 million. Where did this money come from? What ongoing projects is the 17-year-old involved with, aside from gymnastics? Let’s take a look below.

How did Laurie Hernandez Make Her Money & Wealth?

Born on June 9, 2000, in Old Bridge Township, New Jersey, Laurie Hernandez is the youngest child of Anthony and Wanda Hernandez. Athletic from a young age, her parents enrolled her in gymnastics classes when she was six years old. Coached by Maggie Haney, her talents eventually led her to be invited to the U.S. Gymnastics development camps at age nine.

Within three years, she had launched her elite career. In 2012, she competed in the U.S. Classic, where she finished in 11th place. With that, she qualified for and participated in the National Championships. The following year, she was invited to the U.S. Junior National Team. With the group, she traveled to Chicago, where she took part in the U.S. Classic once again, where she won the gold medal in the floor exercise. Subsequently, she also won a silver medal at the 2013 National Championships.

In 2015, the gymnast was named to represent the U.S. at the City of Jesolo Trophy. After receiving a score of 57.650, she was crowned as the junior all-around champion, ahead of her two teammates, Jazmyn Foberg, and Norah Flatley. That same year, she also competed in the U.S. Classic, National Championships, and International Junior Japan Meet.

Fast forward to 2016, the same year as her senior debut, and she had had the chance to represent the country at the Summer Olympic Games in Rio de Janeiro. At the event, she successfully won two medals, a gold in the team event, and a silver on the balance beam. As if that wasn’t impressive enough, the teen had also won two golds at the City of Jesolo Trophy, and a gold at the Pacific Rim Championships that year.

Not long after her Olympic win, she also competed in the twenty-third season of Dancing with the Stars, where she was partnered with Valentin Chmerkovskiy. In the end, she won the competition at the age of sixteen, making her the show’s youngest winner to date.

No, the 17-year-old is currently not married.

Does Laurie Hernandez Have Any Children?

No, Laurie Hernandez does not have any children

Did Laurie Hernandez Go to College?

Seventeen years old as of February 2018, Hernandez is currently still finishing up her high school education. For now, it’s unknown whether or not she plans on continuing her education.

What is Laurie Hernandez Famous For?

As a competitive gymnast, Hernandez is perhaps best known for having won two medals at the 2016 Summer Olympics, as mentioned earlier.

She currently resides in Morganville, New Jersey, where she continues to train. Photos are unavailable.

What Kind of Vehicle Does Laurie Hernandez Drive?

How Much Money Did Laurie Hernandez Make Last Year?

Information on Laurie Hernandez’s annual earnings for 2017 is not available.

Last fall, Hernandez made a brief return to the 25th season of Dancing with the Stars to dance with Victoria Arlen, and her dancing partner, Valentin Chmerkovskiy (the same partner that she had during the 23rd season).

That same year, she had released her book, I Got This: To gold and Beyond, which has made it to the New York Times Best Selling list.