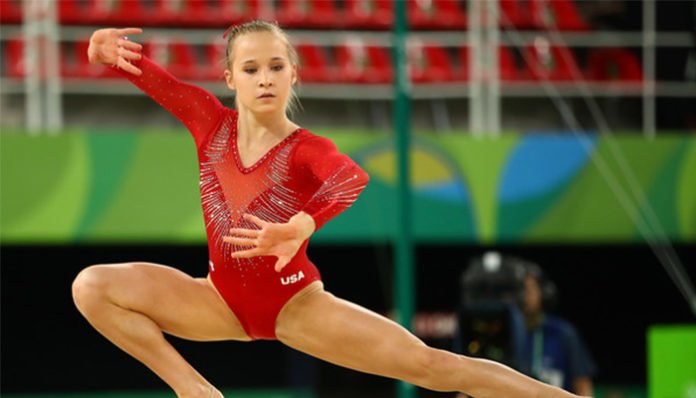 An artistic gymnast, Madison Kocian was a member of the gold-winning team, “The Final Five” at the 2016 Summer Olympics in Rio. In addition to having contributed to the team’s gold medal, she had also finished second on the podium for a silver medal on the uneven bars.

Aside from being an Olympian, she is also a three-time world champion, with three gold medals to her name. In addition to that, she has also proved herself at the U.S. Classic, National Championships, and Pan American Championships. Currently, she is a member of the NCAA women’s gymnastics team at the University of California, Los Angeles.

How successful is the Olympic medalist doing for herself now, four years after her win? Is she well off from her gymnastics career? How wealthy is the 20-year-old? From our research, Madison Kocian’s current net worth hovers around the $500,000 mark. What are some of her biggest moneymakers? Let’s take a look at this question down below.

How did Madison Kocian Make Her Money & Wealth?

Born on June 15, 1997, in Dallas, Texas, Madison Kocian is the daughter of Cindy and Thomas Kocian. Growing up, her parents had signed her up for gymnastics classes at a young age. To further facilitate her training, they eventually took her to the renowned World Olympic Gymnastics Academy in Plano, when she was five years old. The same institute that Nastia Liukin and Carly Patterson had attended, the two had served as some of her greatest inspirations.

At the age of twelve, Kocian earned herself a spot in the U.S. Junior National Team. At the subsequent National Championships, she finished in sixth place in the all-around. From there, she was chosen to represent Team USA at the Junior Competition in Belgium, where she won three medals, including a gold on the uneven bars.

By 2013, she had started to compete on the senior circuit. Early that year, she participated in the Secret U.S. Classic, where she won a silver medal on the uneven bars. With that, she qualified for the U.S. National Championships. Despite a successful start, however, she eventually twisted her ankle, which led her to withdraw from the event.

Returning to the National Championships the following year, she successfully won a silver medal on the uneven bars in 2014. That same year, she also helped her team win a gold medal at the World Championships in Nanning.

Two years later, she had the opportunity to represent the country as a member of Team USA at the 2016 Summer Olympics. Held in Rio de Janeiro, Kocian not only contributed to the team’s gold medal but had also finished second for a silver on the uneven bars. That same season, she had also medalled at the U.S. Classic and the National Championships.

Since then, she has started to attend the University of California, Los Angeles, where she competes as a member of the college’s gymnastics program. Just last year, she had won three individual titles during her collegiate debut.

As far as we know, Madison Kocian is not married.

Does Madison Kocian Have Any Children?

No, Madison Kocian does not have any children as far as we can tell.

Did Madison Kocian Go to College?

Yes, she has been attending UCLA since the fall of 2016. In fact, she is currently a member of its women’s NCAA gymnastics team.

What is Madison Kocian Famous For?

As a competitive gymnast, she is perhaps best known for winning two medals at the 2016 Summer Olympics (for the team event, uneven bars). In addition to that, she had also won three gold medals at the World Championships.

Madison Kocian currently lives in California, where she attends school. Photos of her house are unavailable.

What Kind of Vehicle Does Madison Kocian Drive?

How Much Money Did Madison Kocian Make Last Year?

Information on Madison Kocian’s annual earnings for 2017 is not available.

Most recently, she made her collegiate debut in a meet against the University of Arkansas, where she won the all-around title. At the same meet, she had also won three individual event titles.

Want to support the gymnast? If so, how about following her on social media? You can find Madison Kocian active on a few outlets including Twitter at @Kocian_Madison and Instagram at @Madison_Kocian. On Facebook, you can also check out her official fan page here.