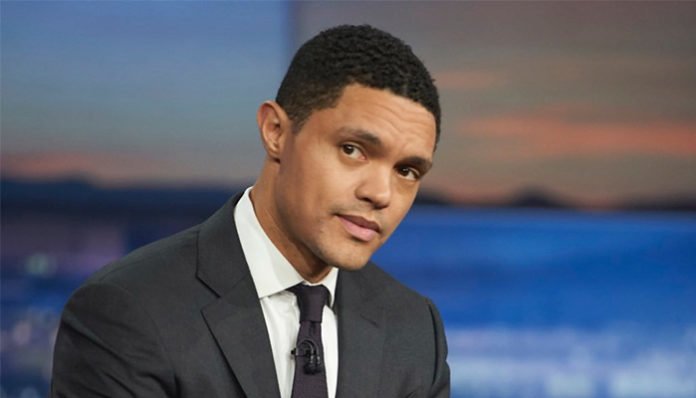 A South African comedian, Trevor Noah is perhaps best known for being the host of Comedy Central’s The Daily Show. Over the years, he has also performed several stand-up specials such as Trevor Noah: Afraid of the Dark, Lost in Translation, and It’s My Culture, among others. Most recently, he has been working on the late-night talk program, The Opposition with Jordan Klepper.

Highly celebrated, the comedian has won numerous awards over the past several years. In fact, he had recently won a Primetime Emmy Award for Outstanding Short Form Variety Series for The Daily Show with Trevor Noah last year.

How wealthy is the television host? How much is he paid for hosting The Daily Show? What other things does he have going for him? From what we can gather, Trevor Noah’s 2018 net worth currently hovers around $13 million. Where did he bank most of his money from? Let’s explore this question down below.

How did Trevor Noah Make His Money & Wealth?

Born on February 20, 1984, in Johannesburg, South Africa, Trevor Noah was raised primarily by his mother and maternal grandmother. Growing up, he went to a private Catholic school and attended church every Sunday. At the age of eighteen, he appeared on screen for the first time as a minor character in a soap opera called, Isidingo. From there, it wasn’t until 2008, that he returned to television- this time as a host, in the show, The Amazing Date.

A year later, he performed his first stand-up special on television called, Trevor Noah: The Daywalker. Incredibly popular, its success ultimately led him to have his own show, Tonight with Trevor Noah in 2010. From there, his popularity only climbed further with the release of his subsequent stand-up specials, Trevor Noah: Crazy Normal, That’s Racist, It’s My Culture and African American.

In 2015, the comedian started hosting his own late-night talk show, The Daily Show with Trevor Noah. Responsible for his rise to fame, his debut mostly drew in positive reviews. In fact, he had received praises from publications such as The New York Times and Los Angeles Times. Last fall, it was revealed that Comedy Central had extended his contract as host for another five years- until the end of 2022.

Aside from his television work, he has also written a book. Not long after signing a book deal with Spiegel & Grau, he had published his first title, Born a Crime in 2016, which was named one of the best books of the years by Booklist, Newsday, and The NewYork Times. In fact, it was announced that a film adaptation would be made in the near future, one starring Lupita Nyong’o.

Going back to our original question, it’s clear that the biggest source of income for the comedian is his work with Comedy Central on The Daily Show. Though it’s unclear how much he received from the said deal, it’s said that he brings home $12 on a yearly basis.

Since 2015, he has been dating model and singer, Jordyn Taylor.

Does Trevor Noah Have Any Children?

No, Trevor Noah does not, as far as we know anyway.

Did Trevor Noah Go to College?

No, Trevor Noah has not attended college.

What is Trevor Noah Famous For?

Trevor Noah is best known for hosting the late-night talk show, The Daily Show with Trevor Noah on Comedy Central.

Originally from South Africa, he currently resides in New York.

Last year, it was made known that he had purchased a $10 million Penthouse in Midtown Manhattan. A luxury home, the 3596 square feet duplex features three bedrooms and two and a half bathrooms.

What Kind of Vehicle Does Trevor Noah Drive?

Unfortunately, we do not have any information on Trevor Noah’s vehicle.

How Much Money Did Trevor Noah Make Last Year?

Information on Trevor Noah’s annual earnings for 2017 is not available.

First and foremost, he has been hosting Comedy Central’s The Daily Show with Trevor Noah. Since last year, he has also been working on the late-night talk show, The Opposition with Jordan Klepper as a co-creator and executive producer.

A fan of the comedian? If so, why not follow him on social media? You can find Trevor Noah on a few outlets such as Instagram and Twitter at @TrevorNoah. Alternatively, you can also visit his Facebook fan page by clicking here. For news and announcements on The Daily Show, click here.