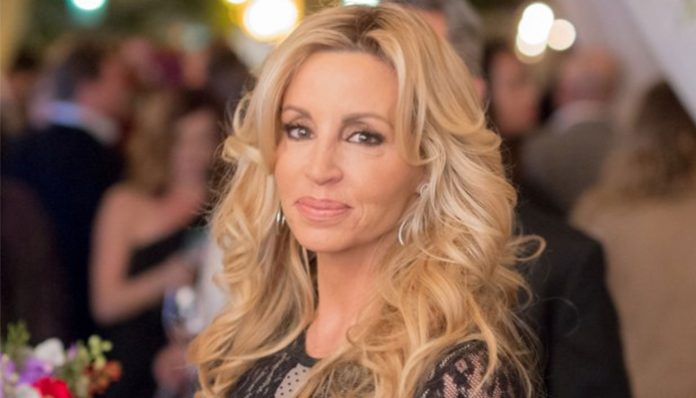 A TV personality, Camille Grammer is perhaps best known for being one of the original cast members on The Real Housewives of Beverly Hills. A former dancer, she has appeared on television since the 1980’s- albeit on-and-off. With that said, it wasn’t until she joined the Bravo reality series that she gained mainstream attention.

In addition to her television appearances, the housewife has also appeared in a number of films such as Private Parts, Deconstructing Harry, The Hungover Games, and An American Carol. Outside of acting, she has also co-hosted shows such as Showbiz Tonight.

How wealthy is the reality star? How much was she paid as one of RHOBH‘s main cast members? According to various sources, Camille Grammer has accumulated a net worth of $50 million throughout her career. What portion of this came from her television appearances? Let’s have a look below.

How did Camille Grammer Make Her Money & Wealth?

Born on September 2, 1968, in Newport Beach, California, Camille Grammer grew up in New Jersey, where her father worked as a financial advisor. Following her high school graduation, she attended Montclair State College where she studied English Literature. From there, she also studied at the UCLA School of Theatre, Film, and Television and New York University.

As a teen, she began working as a dancer on Club MTV. As one thing led to another, she eventually joined a dance group with whom she performed within New York City. Later in the 1990’s, she branched out to modeling and acting. Not only did she pose for publications such as Playboy, but she also played minor roles in films such as The Naked Detective, and New York Nights.

Over the next decade, she accumulated a range of television credits from shows such as Frasier to films such as A Christmas Carol: The Musical. Despite her frequent appearances, however, it wasn’t until 2010 that she gained mainstream attention from starring in The Real Housewives of Beverly Hills.

Premiered in the fall of 2010, the original cast also consisted of Taylor Armstrong, Adrienne Maloof, Lisa Vanderpump, Kim Richards, and Kyle Richards. A big break for Grammer, who had previously only landed minor roles on television, it garnered her a decent amount of fame as a reality star. In the end, she starred on the show for two seasons, before returning as a friend in season three.

What was her salary for starring on The Real Housewives of Beverly Hills? Unfortunately, the amount of money that she made from the show has never been revealed to the public. To put things into perspective, however, it’s known that some of her fellow cast mates (e.g. Lisa Vanderpump, Kyle Richards, Brandi Glanville) are paid upwards of $500,000 per season. Given that she was one of the original housewives, it’s likely that Grammer made herself at least a few tens of thousands of dollars for the first two seasons.

In terms of other ventures, she is also the co-owner of Grammnet Productions, through which she has produced a variety of TV shows such as The Game, Girlfriends, and Medium over the years.

Does Camille Grammer Have Any Children?

She has two children, a daughter named Mason Olivia and a son named Jude Gordon.

Did Camille Grammer Go to College?

What is Camille Grammer Famous For?

Camille Grammer rose to fame as one of the original housewives on The Real Housewives of Beverly Hills. Recently, she returned as a recurring character in season eight.

Camille Grammer currently resides in California. Photos of her abode at not available at this time.

What Kind of Car Does Camille Grammer Drive?

Details on Camille Grammer”s vehicle are not available.

How Much Money Did Camille Grammer Make Last Year?

Unfortunately, details on Camille Grammer’s annual earnings are unavailable at this time.

In December 2017, she returned as a “friend” on the eighth season of The Real Housewives of Beverly Hills, which is scheduled to wrap up on May 8, 2018.

Want to stay up-to-date with the reality star? How about following her on social media? You can find her on Twitter at @TheRealCamilleG or on Instagram at @TheRealCamille. On Facebook, she also has an official fan page, which you can check out here.