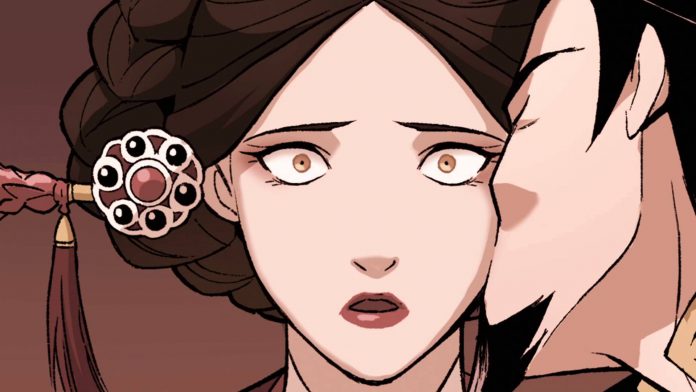 It’s been 15 years since the first airing of Avatar: The Last Airbender, and despite being a huge success, there are still plenty of mysteries regarding plots and subplots that have even bled into a sequel series. Among these mysteries, perhaps the most interesting and tragic pertains to Zuko, the villain turned anti-hero burned by his own father’s hand, and Azula, the psychotic princess of the Fire Nation. Namely, what happened to Zuko and Azula’s mother?

What Happened to Zuko’s Mother?

While her primary history is covered in the “About Ursa” section, to look into what really happened to Zuko’s mother, we probably need to refer to her by her new name, Noriko and look through her comic arc named “The Search”. By the time her children find her, she has long left the Fire Palace and her memories behind using the gift of the Mother of Faces and found her first love, who escaped assassinations through the same method, getting married and having a child. After years of hiding, Azula and Zuko would find her and after the events of the main series would be returned to the Fire Capital. There, she would be under the protection of Zuko alongside her whole family, while Ozai rotted in prison.

While we see very little evidence for her existence in Avatar: The Last Airbender and even in some passing references in the sequel, Legend of Korra, we at least do know a little information. Growing up in the Fire Nation town of Hira’a (a place far flung from the Fire Nation capital) as a magistrate’s daughter, Ursa’s history involved a surprising amount of theatre, as most her early life would be within its halls or tangled with an early romance with a fellow theatre player, Ikem. In these early years, Ursa’s life would have seemed rather peaceful. However, as we know by the time the story of the Avatar appears, things didn’t quite work out that way. While engaged with Ikem for merely a day, a plan in the far-off Fire Nation Capital formed in previous months and was executed. Fire Lord Azulon, the father of future Fire Lord Ozai, had spent time among fire sages who claimed that intermarrying with the bloodline of a previous Avatar, Roku, would make the Fire Lord’s family exceptionally strong. Considering the fact that for 3 generations the Fire Nation would hunt the Avatar, it would make sense to get some of the blood of one into the next generation of hunters. Unfortunately for Ursa, this meant that she was to be married, not to who she loved, but to Ozai instead.

As a result of her being selected to be married by Ozai, she was to be plucked away from her village, friends, and everything that she knew. This would be the first of many heartbreaks and abuses. Soon after the marriage, Ursa would become pregnant and have Zuko, who at first seemed to not be a firebender at all. Due to the culture, this would have been a massive disgrace, and Ozai in turn planned to cast Zuko out of the palace and be killed, though heavy convincing from both fire sages and his wife turned the plan down. As both Zuko and Azula would grow up, it became increasingly clear that Ursa missed her previous life, as she would have letters smuggled out of the city and back to her old life, particularly to Ikem, whom she still loved. As a matter of course, and due to the fact that spies were everywhere in the royal palace, Ozai would find these letters and become bitter, sealing them away and making sure to try and get rid of her old life by way of a few well-placed arrows. To make matters worse, Ozai then informed Ursa of all of this, including he knew of her lie that she told Ikem, that Zuko was, in fact, his son, and would in turn treat him as a traitor. This would remove any love between Ozai and Zuko, and at one point would set up the story for Ursa’s disappearance. After his brother’s son died in a battle, Ozai went to his father, claiming he should take the throne as opposed to his now childless brother. In a fit of rage, Azulon instead stated that Ozai should feel the pain of his brother and execute his own son. Upon hearing this, Ursa instead offered Ozai the chance to assassinate his father with a traceless poison and then take the throne, which Ozai accepted, if she were to be banished, alone, from the palace and never to be seen again. She accepted the offer, though sad to leave her children behind. She would eventually return to her home town, though this time, as mentioned before, as Noriko.