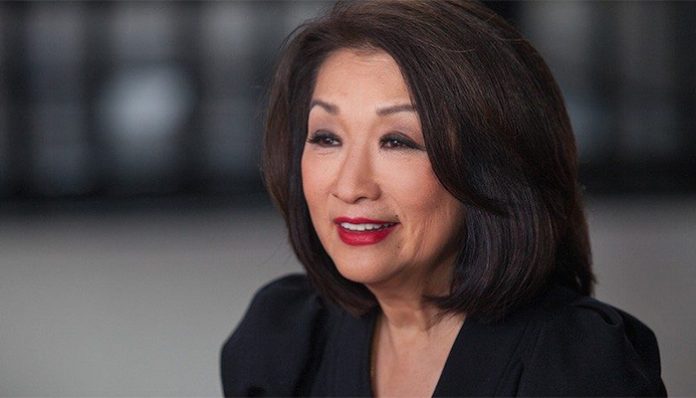 An American journalist, Connie Chung has worked for several news networks over the years including CNN, ABC, and NBC, and a few others. Some of her most notable interview subjects in the past include US Representative Gary Condit and Claus von Bulow.

As a television personality, she has also been featured in shows such as Late Night with David Letterman, Who Wants to be a Millionaire and Politics Nation with Al Sharpton. In fact, she has even made a few guest appearances in the TV series, House of Cards and Fresh Off the Boat.

How lucrative has her career been, considering all that she’s been involved with? How much has she banked as a news anchor/journalist? According to various sources, Connie Chung’s has accumulated a net worth of $15 million as of 2018. What are her biggest sources of income? Where did she earn most of her fortune from? Let’s find out.

How did Connie Chung Make Her Money & Wealth?

Born on August 20, 1946, in Washington, D.C., Connie Chung spent her teen years in Silver Spring, Maryland, where she was a student at Montgomery Blair High School. After graduating, she went to the University of Maryland, where she obtained a bachelor’s degree in journalism. From there, she launched her career as a correspondent for the CBS Evening News in the early 1970’s.

A few years later, she left to work for KNXT, a Los-Angeles based evening news network. In the end, she served as a co-anchor for six years, before moving on to NBC News at Sunrise in 1983. During that period, she often filled-in for Tom Brokaw’s NBC Nightly News on weeknights.

Eventually leaving NBC, she received her own television program, Face to Face with Connie Chung on CBS in 1989. At the same time, she also hosted the Sunday Evening News, a role that she took on for four years. In 1993, she became the second woman to co-anchor a news weekday broadcast on a major network.

Since then, she has worked on several additional news programs including 20/20, Connie Chung Tonight, Weekends with Maury and Connie and CBS Evening News. Considering her experience as an anchor, it’s likely she’s well-paid in the industry. For instance, it’s said that she made $2 million a year from her CNN show, Connie Chung Tonight between 2002 and 2003.

Aside from her work with the news stations, she has been featured in several television shows such as Politics Nation with Al Sharpton, Nancy & Tonya, The Tonight Show Starring Johnny Carson and Paula’s Party. On top of that, she’s also narrated the documentaries, Washington in the ’60’s and Knife to the Heart.

Speaking of TV appearances, did you know that she has also acted on a few occasions? Just last year, she made a cameo in the political drama, House of Cards. Since then, she has also appeared in the comedy series, Fresh Off the Boat.

In terms of other ventures, she previously taught at the John F. Kennedy School of Government at Harvard University.

Yes, since 1984, she has been married to talk show host, Maury Povich.

Does Connie Chung Have Any Children?

In 1995, she and her husband adopted a son named Matthew Jay Povich.

Did Connie Chung Go to College?

Yes, she did. After graduating from high school, she went to the University of Maryland, where she studied journalism; she obtained her bachelor’s degree in 1969.

What is Connie Chung Famous For?

An established anchor, Connie Chug rose to fame for her work with the news stations CNN, CBS, and NBC. Some of the programs that she’s hosted in the past include Eye to Eye with Connie Chung, the CBS Evening News and Good Morning America.

Unfortunately, we do not have any information on Connie Chung’s location at this time, nor do we have any pictures of her home.

What Kind of Car Does Connie Chung Drive?

Details on Connie Chung’s vehicle are not available.

How Much Money Did Connie Chung Make Last Year?

Unfortunately, we do not have any information regarding Connie Chung’s annual salary.

As mentioned earlier, she recently made a couple of guest appearances on the popular political drama, House of Cards in 2017. Earlier this year, she also appeared as herself in the series, Fresh Off the Boat.

Outside of acting, she has also worked on Chandra Levy: An American Murder Mystery and Megan Kelly Today.

Unfortunately, it doesn’t look like Connie Chung is active on social media at this time. Should she decide to join in the future, we will be the first ones to let you know.