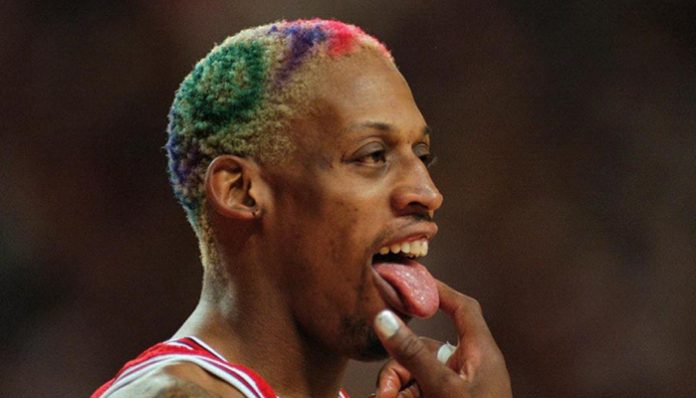 Known for his rebounding and defensive abilities, Dennis Rodman enjoyed a successful basketball career with the NBA, prior to his retirement in 2008. Nicknamed “The Worm”, he played for many teams including the Dallas Mavericks, Los Angeles Lakers, and Detroit Pistons, among a couple of others.

In addition to basketball, he’s also made a name for himself on television and film. For instance, did you know that he had a talk show on TV at one point called, The Rodman World Tour in the late 90’s? Not only that, but he had also taken on a couple of lead roles in the movies Simon Sez and Double Team.

How rich is the former NBA basketball player? How much did he make from his sports career? What is he up to nowadays? According to various sources, Dennis Rodman’s 2018 net worth is an estimated $500,000.

How did Dennis Rodman Make His Money & Wealth?

Born on May 13, 1961, in Trenton, New Jersey, Dennis Rodman took on many odd jobs to support his family as a teen, after his father left the family. Brought up in the Oak Cliff neighborhood in Dallas, he went to South Oak Cliff High School, where he failed to make it into the basketball team due to his small stature. Despite this, he eventually made it into Southeastern Oklahoma State University, a NAIA college.

At the age of twenty-five, he was drafted by the Detroit Pistons as the third pick during the 1986 NBA draft. For the next seven years, he played as a small forward on the team. It wasn’t until the 1993-94 season that he joined the San Antonio Spurs, with whom he was with until 1995. In the following years, he played with several other teams including the Chicago Bulls, Los Angeles, Lakers, and Dallas Mavericks. Considering all the games that he played, it’s not surprising to know that he had banked an impressive from his NBA career.

In addition to his basketball career, Rodman also enjoyed various roles on television. For instance, he was the host of his own reality talk show, The Rodman World Tour on MTV in 1996. Not long afterward, he also made his film debut in Double Team which also starred actors Jean-Claude Van Damme and Mickey Rourke. Some of his other movie credits include Cutaway and Simon Sez.

As far as reality TV goes, he has also participated in several shows such as Celebrity Big Brother and Love Island. In 2004, he even won the $222,000 cash prize on ABC’s Celebrity Mole. More recently in 2013, he competed on Celebrity Apprentice, where he successfully raised $20,000 for his charity of choice, Make-A-Wish Foundation.

Besides basketball, he also got into professional wrestling on a part-time basis. Known for his signature arm drag and elbow strike, he had competed on the ring many times before retiring from the sport in 2008.

Despite his retirement, he later competed on Hulk Hogan’s Celebrity Championship Wrestling in 2008, where he defeated Dustin Diamond and Butterbean.

Previously, Dennis Rodman was married to Michelle Rodman; they later filed for divorce in 2012. Prior to that, he was married to his first wife, Annie Bakes from 1998 to 1999.

Does Dennis Rodman Have Any Children?

Did Dennis Rodman Go to College?

Yes, he went to Southeastern Oklahoma State University, where he played basketball before being drafted by the Detroit Pistons during the 1986 NFA Draft.

What is Dennis Rodman Famous For?

Dennis Rodman is best known for his professional basketball career with the NBA. Aside from that, he also made himself known as a TV personality with appearances in shows such as Celebrity Championship Wrestling and Celebrity Mole.

Unfortunately, we do not have any information on Dennis Rodman’s abode at this time.

What Kind of Car Does Dennis Rodman Drive?

Details on Dennis Rodman’s vehicle are not available.

How Much Money Did Dennis Rodman Make Last Year?

At this time, we do not have any information on Dennis Rodman’s annual salary.

Last year, he landed a feature on Mansionz’s self-titled debut album; more specifically, he had provided vocals for the songs I’m Thinking About Horses and Dennis Rodman.

On television, he had also appeared in Trailer Park Boys Out of the Park and The Amazing Adventures of Wally and the Worm in 2017.