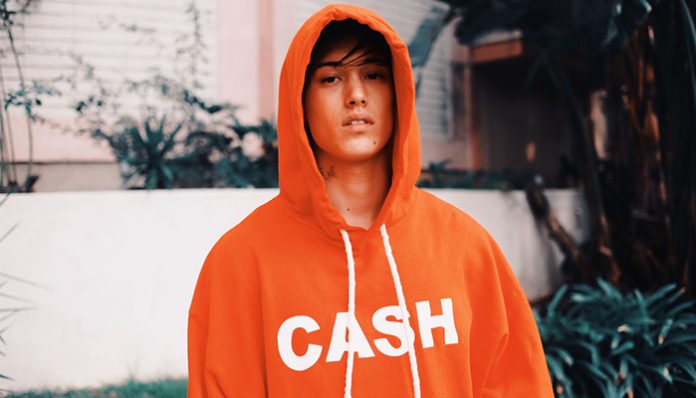 An up-and-coming rapper from California, Derek Luh has released a number of singles including It’s Luh, Eyes Low, and Blow it Out. The first hip-hop artist to have signed with Mark Battles’ Fly America label, he currently has three mixtapes to his name- L.A. Confidential, The Second Coming and Hollywood Blvd. Last year, he also released his debut EP, Disposable Hero.

In addition to his solo efforts, he has collaborated with several big names over the past couple of years such as Dizzy Wright and French Montana. At one point, he even went on tour with Machine Gun Kelly.

How rich is the twenty-something? How much has he pulled in from his music career? According to various sources, Derek Luh has accumulated a net worth of $500,000 as of 2018. Where did he earn this money from? What are some of his greatest projects? We’ll be taking a look below.

How did Derek Luh Make His Money & Wealth?

Born on June 24, 1992, in Los Angeles, California, Derek Luh got into rapping in his early twenties after one of his friends introduced him to the hobby. Drawing inspiration from J. Cole, one of his biggest role models, he eventually began to record his own music in the mid-2010’s. In the end, it didn’t take long for him to develop a solid underground fan base.

In 2013, he released his first mixtape, L.A. Confidential. Uploaded to DatPiff, it gave rise to thirteen original tracks including Dancing With an Angel, Fly America, Magic Johnson, and Screws Loose. As of 2018, the playlist has been played thousands of times online.

Two years later, he dropped a new project titled, The Second Coming. Produced by AC Beats and J. Cuse, it consisted of fifteen tracks, two of which (i.e. Foster Brothers, Wake Up Call) featured Mark Battles. From there, he shared a third mixtape, Hollywood Blvd in September 2015.

Fast forward to 2017 and he’s come out with his debut EP. Released through his own music label, Derek Luh Music, it boasted four tracks- Still Made It, Smoke, Just Might, and Nice To Meet Ya. Shared online, the playlist has already picked up more than 50,000 streams on SoundCloud. To this day, it remains to be his most successful record.

As far as singles go, some of his most popular titles include It’s Luh, Eyes Low, Blow It Out, and Lifestyle. In addition to his solo releases, the twenty-something has also done a number of collaborations over the past few years. For instance, he worked with Mark Battles on Monster, and with Sk8 on Rolling. Some of the other artists that he’s collaborated with include Asaiah Ziv, Ashley All Day, and Miny.

As you can probably expect, the majority of his income comes from his musical releases. On top of that, however, he does perform concerts from time to time (naturally, he would yield a decent amount per show). With that said, it doesn’t look like he has any performances planned for the next few months. For the latest updates, be sure to check out his official Facebook page.

No, Derek Luh is not married. Having said that, not much is known about his personal life.

Does Derek Luh Have Any Children?

No, Derek Luh does not have any children.

Did Derek Luh Go to College?

We do not have any information on Derek Luh’s education history at this time.

What is Derek Luh Famous For?

Derek Luh currently lives in Los Angeles. At this time, we do not have any pictures on his abode.

What Kind of Car Does Derek Luh Drive?

Details on Derek Luh’s vehicle are not available.

How Much Money Did Derek Luh Make Last Year?

Unfortunately, details on Derek Luh’s annual earnings are not available.

As mentioned earlier, the artist recently came out with his extended play, Disposable Hero on January 6, 2017. On top of that, he had released two singles, Grow Up and For Your Consideration.

What’s the artist up to now? If you’re curious, why not follow Derek Luh on social media? You can find him on Twitter at @DerekLuh and on Instagram at @Derek_Luh. Don’t forget to also check out his official Facebook fan page here.