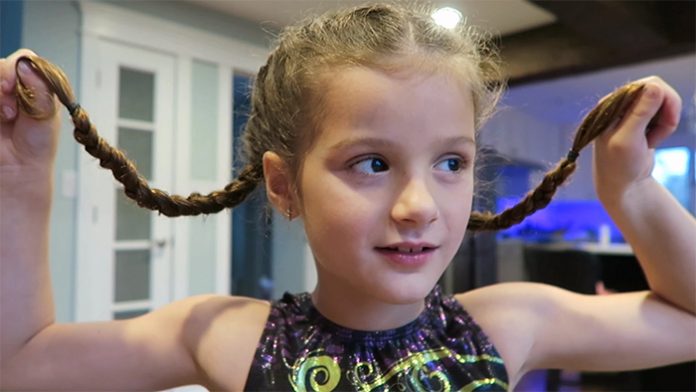 A social media personality, Hayley Noelle Leblanc rose to fame on her family’s YouTube channel, Bratayley (which was initially created for her). Not only have they managed to gain over 6 million subscribers to date, but they’ve also received many accolades over the past few years. In the past, she had also been featured alongside her siblings on OMMyGoshTV.

Aside from YouTube, the brunette can also be found on platforms such as Musical.ly and Instagram. In fact, her videos have earned her more than 4 million followers on the music network. Currently, she is signed with Disney’s Maker Studios.

How successful is her online career? Is it as lucrative as it seems? How much has she earned from her various social media endeavors? From various sources, it would appear that Hayley Noelle LeBlanc’s current net worth is around $150,000. How much of this came from YouTube? Let’s take a look at this below.

How did Hayley Noelle LeBlanc Make Her Money & Wealth?

Born on September 2, 2008, in Texas, Hayley Noelle LeBlanc is the daughter of Billy and Katie LeBlanc. When she was still a toddler, her parents started to upload videos of her on YouTube. Today, the account has evolved into a family vlog channel called Bratayley. Currently nine years old, it’s not surprising to know that most of her social media accounts are managed by her parents.

Best known for her appearances on the YouTube channel, she (and her family) has gained a significant fan base over the past several years. Since they created the account in 2010, they’ve amassed more than 6 million subscribers with over 3.1 billion views, making them one of the most popular families on the site.

With the millions of views that they receive, one can only imagine the amount of ad revenue that their videos bring in. Known for its money-making potential, YouTube pays its partners a set amount in exchange for ad views. According to certain online sites, their channel makes upwards of $5,000 per day from ad revenue. After doing the math, this easily works out to be over $1 million a year- not bad for making vlogs!

For those who’d like to support the Bratayleys, you can check out their official merchandise store here. In fact, Hayley has her own section, where fans are able to purchase a specially designed sweatshirt.

Aside from her YouTube career, the brunette is also well known on musical.ly, where she has earned more than 4 million followers. Likewise, she has accumulated over 2.6 million fans on Instagram.

As far as other things go, she has appeared in a couple of web series in the past including Mani and Chicken Girls. At one point, she and her siblings were also featured on the channel, OMMyGoshTV.

Is Hayley Noelle LeBlanc in a relationship?

Considering her age, it only makes sense that she is not in a relationship.

Where does Haley Noelle LeBlanc go to school?

Besides the fact that she is currently attending elementary school, not much is known about her education.

What is Haley Noelle LeBlanc Famous For?

Hayley Noelle LeBlanc rose to fame as one of the main stars on her family’s YouTube channel, Bratayley. To date, they have gained over 6 million subscribers on the site.

Unfortunately, not much has been revealed about the family’s location.

What Kind of Car Does Haley Noelle LeBlanc Drive?

Haley Noelle LeBlanc still has many years ahead of her before she is able to drive.

How Much Money Did Haley Noelle LeBlanc Make Last Year?

Though it’s unknown how much Haley Noelle LeBlanc herself earns in a year, her family is said to have raked in over $1 million from their YouTube channel alone in 2017.

Over the past year, Haley Noelle LeBlanc has made numerous appearances on her family’s YouTube channel. As far as other things go, she has been appearing in the web series Chicken Girls and Mani since 2017.

Want to show your support? If so, how about following her on social media? You can find her on Twitter at @elleoNyaH and on Instagram at @hayley.leblanc. Alternatively, you can check out her family’s official Facebook fan page by clicking here.