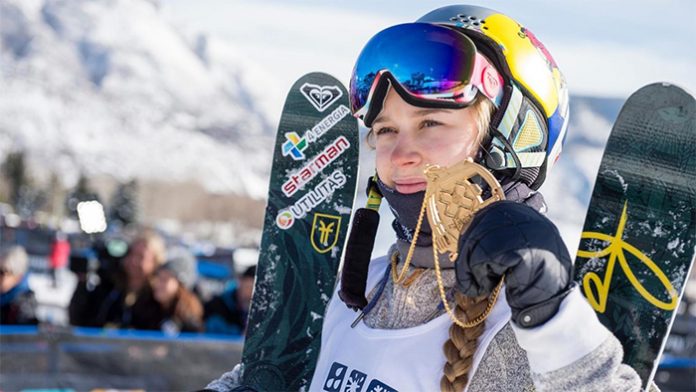 An Estonian skier, Kelly Sildaru gained acclaim after winning a gold medal at the Winter X Games at the age of thirteen. The youngest athlete to have ever achieved such a feat, she has since won two additional medals at the event. In addition to the Winter X Games, she has also medalled at the Junior World Championships and Winter Dew Tour.

Talented beyond her age, many believed that she would win a gold medal in the slopestyle event at the 2018 Winter Olympics. Due to a knee injury, however, she was ultimately forced to sit out of the competition.

As a competitive skier with multiple gold medals to her name, how financially successful is she? Has she racked up a decent amount of prize money over the past few years? How wealthy is the 16-year-old? Unfortunately, information on Kelly Sildaru’s net worth is not yet available. In the meantime, let’s take this opportunity to learn more about the teen.

How did Kelly Sildaru Make Her Money & Wealth?

Born on February 17, 2002, in Tallinn, Estonia, Kelly Sildaru has been making waves in the freeskiing world for many years despite her young age. Coached by her father, it was apparent that she had inherited his passion for the sport. A natural on skis, she began to compete in various competitions when she was ten years old.

At the age of thirteen, she participated in her first Winter X Games where she defeated Tiril Sjastad Christiansen for a gold medal in the slopestyle. With that, she not only became the first person from Estonia to win a medal, but she also became the youngest skier to have ever finished in first place at a Winter X Game event.

Though the breakdown of prize money has not been publicized, it’s said that one can easily earn up to $3 million from a single victory depending on the event. Considering that, it’s likely that Sildaru has earned herself a fair amount of her accomplishments at the games.

Since her first gold medal win at the 2016 Winter X Games, she’s also won two additional medals- one gold, one silver, in the big air and slopestyle events in 2017. That same year, she had also finished second for a silver medal at the Winter X Games Europe which took place in Hafjell.

Aside from her achievements at the Winter X Games, she has also proved herself to be a worthy contender at other events such as the Winter Dew Tour. For two consecutive years (i.e. 2015-2016), she had won a gold medal in the slopestyle event in Breckenridge.

Most recently last year, the teen also triumphed at the 2017 Junior World Championships where she won both the slopestyle and halfpipe events. Naturally, she would have also earned herself some prize money from the two victories.

Though she originally intended to compete in the women’s slopestyle in the 2018 Winter Games, a knee injury ultimately forced her to miss the Olympics.

No, Kelly Sildaru is not married. As far as we know, she is currently not in a relationship.

Does Kelly Sildaru Have Any Children?

No, Kelly Sildaru does not have any children.

Did Kelly Sildaru Go to College?

For now, Kelly Sildaru is still working toward her high school graduation. At this time, it’s unknown whether or not she will be going to college.

What is Kelly Sildaru Famous For?

A competitive freestyle skier, Kelly Sildaru rose to fame after winning a gold medal at the Winter X Games at the age of thirteen in 2016.

Kelly Sildaru currently resides with her family in Estonia. Unfortunately, that’s all the details that we have at this time.

What Kind of Car Does Kelly Sildaru Drive?

Details on Kelly Sildaru’s vehicle are not available.

How Much Money Did Kelly Sildaru Make Last Year?

At this time, we do not have any information on Kelly Sildaru’s annual earnings.

Last year, the 16-year-old skier won two gold medals at the Junior World Championships as mentioned earlier. Despite being a crowd favorite, she was unable to compete in the women’s slopestyle event at the recent Winter Olympics due to a knee injury.

Want to support the young athlete online? If so, how about following her on social media? You can find Kelly Sildaru on Instagram at @KellySildaru. On Facebook, you can also show your support by liking her official fan page here.