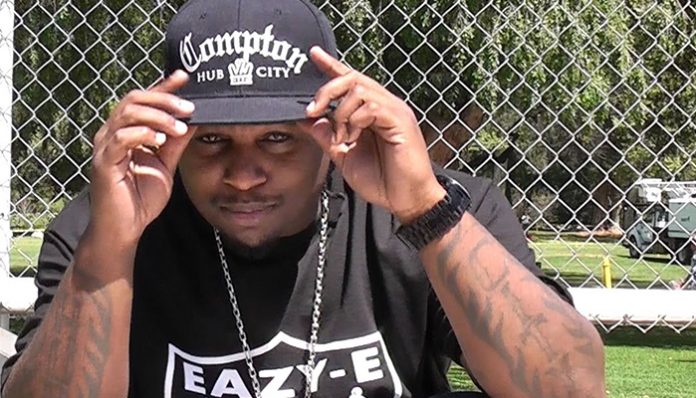 A hip-hop artist, Lil Eazy-E is perhaps best known for his songs, Coming From Compton, This Ain’t a Game, and Outside. The oldest son of Eazy-E aka “The Godfather of Gangsta Rap”, he currently serves as the CEO of NWA Entertainment.

A frequent collaborator, he has worked with numerous artists in the past such as Papoose, Bone Thugs-N-Harmony, and Joel NR Powell. Some of these tracks include They Look at Me, MY Confession, and Men of Respect.  With that said, he hasn’t released any new singles as of late- his most recent track, Sons of N.W.A. was issued back in 2015.

How is the rapper doing for himself these days? How much has he banked from his musical endeavors? How rich is he? Unfortunately, information on Lil Eazy-E’s net worth is currently unavailable.

How did Lil Eazy-E Make His Money & Wealth?

Born on April 23, 1984, Lil Eazy-E is the oldest son of Eazy-E, a rapper who is best remembered as the pioneer of gangsta rap. Alongside his siblings, he grew up in Compton, California, where he became enamored with music at a young age. His brother, Derek Wright aka “E3” is a member of the music group, Compton MoneyGang.

Since his father died from complications from AIDs in 1995, he has become an anti-HIV activist. In honor of him, he released a remix of Eazy-Er Said Than Dunn in 2003. A decent success, it later appeared on the Eternal E- Gangsta Memorial DVD.

A few years later, he started to work on his debut album, Prince of Compton. Though it was originally slated for a 2006 release, it was later pushed back to 2009. Featuring guest vocals from Ice Cube, DJ Yella, and a few others, it gave rise to the single, This Ain’t a Game, which has since been played over 2 million times on YouTube.

Since then, he has released several singles including Come Outta Compton, What We Claiming’, The New West Coast, and This Ain’t A Game, most of which were met with praise by fans.

Previously signed to Virgin Records, he is currently the head of a production company called NWA Entertainment. On top of that, he also manages a rap collective called Compton MoneyGang with his brother, E3 and his cousins.

In addition to what he’s earned from his records over the years, he also pulls in a decent amount of money from public events such as shows and concerts.  In fact, he had recently joined DJ Yella on his Boys in the Hood Canada Tour earlier this year in March.

Speaking of other endeavors, in the past, he had released a documentary titled, The Life and Times of Eric Wright, which revolved around his late father. In 2016, he had also made an appearance in the TV documentary, Streets of Compton.

As far as we know, Lil Eazy-E is not married.

Does Lil Eazy-E Have Any Children?

No, Lil Eazy-E does not have any children.

Did Lil Eazy-E Go to College?

Instead of pursuing college, Lil Eazy-E chose to go for a full-time music career.

What is Lil Eazy-E Famous For?

The son of the late Eazy-E, the rapper is perhaps best known for his collaboration with The Game, Outside, which has since been played millions of times on the web.

Lil Eazy-E currently lives in Compton, California. Unfortunately, that’s all the information that we have on his location at this time.

What Kind of Car Does Lil Eazy-E Drive?

Unfortunately, we do not have any information on Lil Eazy-E’s vehicle.

How Much Money Did Lil Eazy-E Make Last Year?

At this time, we do not have any details on Lil Eazy-E’s 2017 earnings.

As far as we can tell, it’s been a while since the rapper’s last musical release- his most recent single, Straight Outta Compton was released back in 2015. For now, it’s unclear what he has in store for his fans.

A fan of the rappers? If so, why not follow him on social media? You can find Lil Eazy E on platforms such as Instagram (@lileazy_e) and Twitter (@ewrightjr). On Facebook, you can also support him by liking his official fan page.