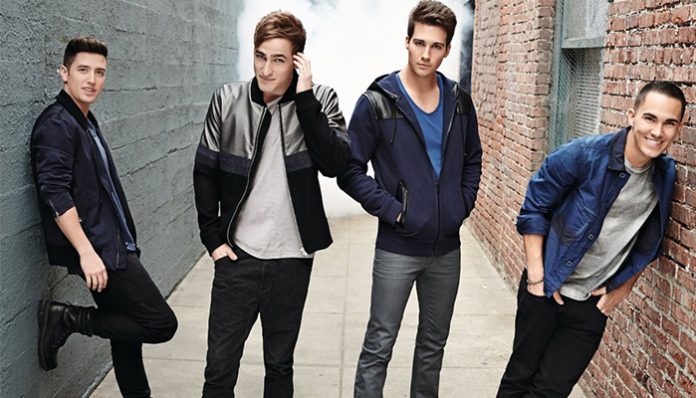 An award-winning boy band, Big Time Rush rose to fame after starring in the Nickelodeon series, Big Time Rush. Simultaneously, they’ve also launched a music career through Nick Records. Their debut single, Lil I Forget About You was released in 2010.

Despite their popularity, however, the group hasn’t come out with any new material since 2013. What happened to Big Time Rush? Can we expect to see anything from them in the near future?

In 2013, the band came out with their third (and seemingly final) studio album, 24/Seven. While it wasn’t as successful as their earlier efforts, it did manage to peak at number four on the Billboard Top 200. Noted for its R&B and dance-rock elements, the album had given rise to ten tracks including Run Wild, Like Nobody’s Around, Get Up, and Song For You (Feat. Karmin).

With that said, they had actually announced their hiatus prior to the tour- back when the Big Time Rush television series had ended in 2013. At the time, it was said that the group members were interested in pursuing solo music careers (they had hinted at the possibility of coming back together in 2018, though it has not yet happened).

What are the Members of Big Time Rush Doing Now in 2018?

Since then, Kendall Schmidt has been performing as one-half of Heffron Drive, a pop rock duo that he and Dustin Belt originally formed in 2008 (the latter has served as Big Time Rush’s touring guitarist). Through TOLBooth Records, the pair had released their debut single, Parallel in March 2014. Since then, they’ve come out with several other songs such as Rain Don’t Come, Living Room, and Mad at the World. Their second studio album, Separate Lives was recently issued in 2018.

After the band’s separation, James Maslow competed on the 18th season of Dancing with the Stars, where he finished in fourth place. As far as other television appearances go, he has also appeared in 48 Hours To Live, Seeds of Yesterday, and The Penguins of Madagascar. Earlier this year, he was cast as one of the celebrities in Celebrity Big Brother.

On the music front, he also released a solo album titled, How I Like It in 2017. To promote the project, he had embarked on a Europe Tour.

In early 2014, Carlos Pena Jr. released his debut single titled, Electrico. A Spanish song, it had reached the Top 10 on the Latin iTunes chart. As far as we know, he has not come out with any new records since.

Music aside, however, he has remained active on television with appearances in shows such as The Thundermans, The Penguins of Madagascar, Instant Mom, and The Loud House. In the summer of 2015, he and his wife also competed against each other on the 21st season of ABC’s Dancing with the Stars.

In January 2017, Henderson released his debut single titled, Sleepwalker. Since then, he has also dropped the titles Speak of the Devil and Bite My Tongue, though he hasn’t come out with a solo album.

Compared to his former bandmates, he hasn’t appeared on television much since the end of Big Time Rush. His most recent appearance was that of a voice-over role in the animated series, The Penguins of Madagascar in 2015.

Formed in 2009, Big Time Rush rose to fame after starring in the Nickelodeon series, Big Time Rush. A big hit, the show had attracted 6.8 million viewers during its official premiere on November 28, 2009. Created by Scott Fellows, it centered around the misadventures of four Hockey players, who were portrayed by the band.

Thanks to the show, the quartet’s popularity grew tremendously in the early 2010’s. Not only were they able to act, but they were also able to sing. In the fall of 2010, Big Time Rush released their debut album, BTR, which ended up selling over 700,000 copies in the U.S., a feat that earned it gold accreditation from the RIAA.

Over the next two years, the boys released two additional albums, Elevate and 24/Seven. While they both charted on the Billboard 200 however, they did not replicate the same level of success as their debut effort. With that said, they still gave rise to a number of hit songs such as Music Sounds Better With U (Feat. Mann), 24/Seven, and Windows Down.

Following the end of their Nickelodeon series in 2013, it was announced that the group would be going on an indefinite hiatus.