What Happened to Steve from Blue’s Clues? – 2018 Update 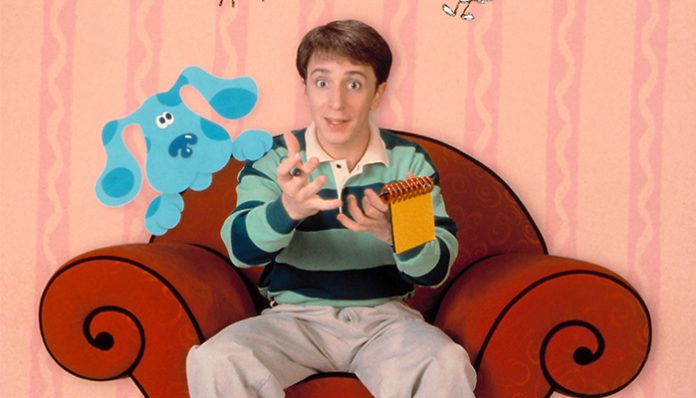 Known by fans simply as “Steve”, Steven Burns is best known for having hosted the children’s TV program, Blue’s Clues. After landing the role in 1996, he starred on the show for six years before departing in 2002. For his work, he received a Daytime Emmy Award nomination in 2001. Where is he now in 2018?

What is Steve from Blue’s Clues Doing Now in 2018?

After hosting Blue’s Clues for nearly 100 episodes, he left in 2002. In the wake of his exit, many were left wondering- why did he choose to leave? At the time, many believed that he had left the children’s program to pursue a music career. While he did release a few albums, however, it was in no way the main reason for his departure- something that he later confirmed in an interview with The Huffington Post.

The reality was, he had decided to leave as “it was simply time to go.” Though he “loved kids”, he had never wanted to pursue a career as a “children’s host.” Not only that, but he was getting older, losing his hair even. Here’s some interesting trivia- he had shaved his head after filming the final episode of Blue’s Clues.

What has he been up to since? Interestingly enough, there have been many strange rumors about him since his departure. For instance, there have been many claims of him having died- either from a car accident or heroin overdose. At one point, some people even believed that he had been replaced with a look-alike. Wanting to extinguish these rumors, he eventually appeared on The Today Show alongside Angela Santomero, the co-creator of Blue’s Clues.

As for what he has really been up to, he has been involved with various projects over the years. For instance, he had released a studio album titled, Songs for Dustmites not long afterward in 2002. From there, he eventually formed a band with Ryan Smith and Drozd of A Million Billion called Steve Burns and the Struggle. Their latest album, Deep Sea Recovery Efforts was released in 2009.

As an actor, he had also appeared in a number of films such as Netherbeast Incorporated, Marie and Bruce, and Christmas on Mars. In 2013, he also played a small recurring role in the TV series, The Professionals.

Most recently, the former Blue’s Clues host released an album of children’s music titled, Foreverywhere with long-time collaborator, Steven Drozd. An 11-track project, it included child-friendly songs such as Mimic Octopus, Space Rock Rock, a Fact is a Gift That You Give Your Brain, and I’m Up. In order to promote the release, he had also given a rare television appearance in March 2017.

To date, the accompanying video for the first song, The Unicorn and Princess Rainbow has been viewed 200,000 times on YouTube.

Born on October 9, 1973, in Boyertown, Pennsylvania, Steve Burns grew up in Berks County where he went to Boyertown Area Senior High School; he later graduated in 1991. Having always been interested in music, he played in several bands throughout his late teens and early twenties including the Ivys, Nine Pound Truck, and Sudden Impact US. Following his graduation, he studied theatre at DeSales University in Centre Valley.

Prior to completing his degree, however, he decided to move to New York in attempts to pursue an acting career. For the first few years, he rented an apartment near Time Square. From there, he landed a few voice-acting gigs for a number of advertisements.

As it’d happened, he eventually auditioned for Blue’s Clues in 1995- at the time, he had thought it was just another voice-over role. Though the producers were unsure at first, they eventually cast him as the host of the children’s show. Much to everyone’s surprise, it became a huge hit among children across the country. In the end, he remained on Blue’s Clues for six years, from 1996 to 2002.

During that period, he had also appeared in various spin-offs such as the video games Blue’s ABC Time Activities, Blue’s Birthday Adventures, and the shorts, Blue’s Birthday. In 2001, his role as host earned him a Daytime Award nomination.

As mentioned earlier, he has gotten involved with several projects since Blue’s Clues; not only has he formed his own band, but he has also appeared in a handful of films such as Netherbeast Incorporated, Marie and Bruce, and Christmas on Mars. In 2005, he had also been featured in the TV documentary, The Fearless Freaks.

As a musician, he has since also released three albums- the first of which (i.e. Songs for Dustmites) came out in 2003. His most recent title, Foreverywhere, a children’s album, came out in early 2017.