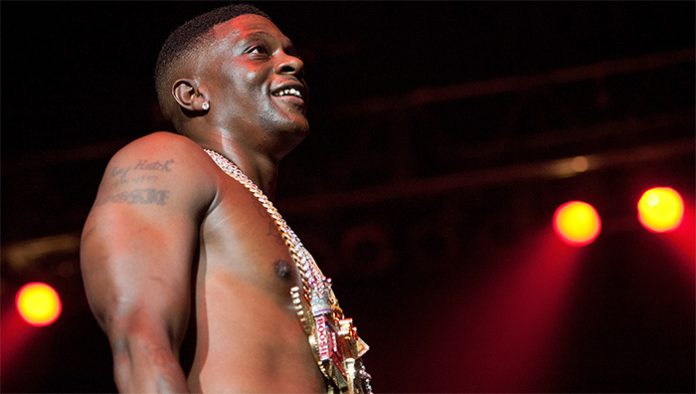 A Baton Rouge native, Boosie made himself known as a rapper with the release of his debut album, Youngest of da Camp in 2000. Since then, he has come out with several other projects including For My Thugz, Incarcerated, and Touch Down 2 Cause Hell. His most recent album, BooPac came out in 2017.

Incredibly popular, despite the fact that he’s spent most of his adult life in and out of prison, he has amassed more than 30,000 fans on SoundCloud alone. Likewise, his music videos have also earned him hundreds of thousands of subscribers on YouTube.

How much has he pocketed from his rap career so far? How financially successful is the 35-year-old rapper? How rich is he? According to various sources, Boosie’s current net worth stands at an estimated $750,000. What are some of his greatest projects? What contributes the most to his overall income? How many streams of revenue does he have? Let’s take a look.

How did Boosie Make His Wealth?

Born and raised in Los Angeles, California, Boosie has been involved with rap ever since his teen years. For instance, he joined a group called Concentration Camp at the age of fourteen, with whom he performed for a few years in the late 1990’s. Ultimately, it wasn’t until 2000 that he decided to go solo. That year, he put together his first studio album titled, Youngest of the Camp, a project that was primarily produced by Happy Perez.

A year later, he signed with Trill Entertainment. Through the label, he released a second album titled, For My Thugz in early 2002. However, it wasn’t until 2006, that he started to gain more buzz with his third project, Bad Azz. His first record to reach the Billboard Top 200 chart, it ultimately spawned the charting single, Zoom (Feat. Yung Joc), which reached number 61 on the Billboard Hot 100.

Since then, Boosie has dropped four additional albums- Incarcerated, The Return of Boosie Bad Azz, BooPac, and Touch Down 2 Cause Hell, all of which have charted respectively on the Billboard Top 200 music chart. Considering their popularity, it’s likely that he banked a decent amount from the said projects.

In addition to his solo releases, Boosie has also worked on a number of collaborative albums. For instance, he and fellow Baton Rouge rapper Webbie put together a project titled, Ghetto Stories in 2003. Some of his other joint ventures include Gangsta Music, Penitentiary Chances, and Trill Entertainment Presents: All or Nothing.

What other things has he been involved with? Though rapping is his main focus, he has also dabbled in acting. In 2010, he briefly appeared in a short film titled, Ghetto Stories. Last year, it was also revealed that he will be making his big screen debut in an independent film called, Glass Jaw, which will center around boxing.

As far as television appearances go, the rapper has been featured in a handful of shows in the past such as Revolt Live, The Caleb Crump Show, and The Dream Chaser.

No, Boosie is not married. As far as we know, however, he is currently in a relationship (though not much has been revealed about his girlfriend).

Does Boosie Have Any Kids?

He has a daughter from a previous relationship, who was born in 2016.

Did Boosie Go to College?

No, he hasn’t. In fact, he had received his GED while incarcerated.

What is Boosie Famous For?

Boosie is perhaps best known for his studio albums Bad Azz, and Touch Down 2 Cause Hell, both of which received rave reviews from fans.

Where Does Boosie Live now? Pictures of Boosie’ House

The rapper currently resides in LA, where he continues to make strides in his rap career. We do not have any photos of his abode at this time.

What Kind of Car Does Boosie Drive?

Details on Boosie’ vehicle are not available.

How Much Money Did Boosie Make Last Year?

At this time, we do not have any information on Boosie’s annual salary.

Last December, Boosie released a new studio album dubbed, BooPac, which charted at among the top 50 on the Billboard 200. For those who’ve been waiting for some new music, you’re in luck- Boosie will be coming out with a new project titled, Bigger and Badder Than Ever later this year.

As far as other things go, he has landed a few features this year, some of which include East Saint, Neighborhood DopeMan, Rap Life and Be Without You.

What’s the Baton Rouge rapper up to nowadays? If you’re a fan, why not keep up with him by following him on social media? For instance, did you know that you can check out his photo feed on Instagram? You can visit his official account here. For his official music videos and more, don’t forget to also check out his YouTube channel here.