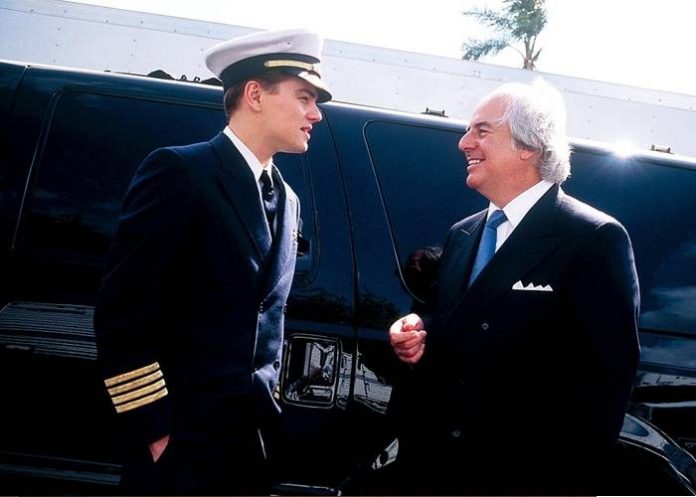 As the old saying goes, crime doesn’t pay, in the long run at least, and generally speaking there’s a lot of truth to the saying. But of course there’s always going to be exceptions to any rule, and in the case of Frank Abagnale, crime definitely has paid in the long run.

Frank Abagnale Jr. was the man whose life story was dramatized in the 2002 crime drama from director Steven Spielberg, ‘Catch Me If You Can’, starring Leonardo DiCaprio and Tom Hanks. The film was a big commercial success and took over $350 million at the box office, and even though Frank Abagnale’s real-life activities didn’t result in quite so much profit, he has amassed a personal net worth of several million dollars as an indirect result of his spectacular criminal career. But how did the master scam artist make a legitimate fortune? And how much is the king of the conmen worth now in 2018? Read on to find out.

How Did Frank Abagnale Jr. make his money & wealth?

Frank William Abagnale Jr. was born on April 27th, 1948 in Bronxville, New York. His mother Paulette was French, but she and his father, Frank Sr. divorced when Frank Jr. was only fourteen. Frank’s father was a respectable businessman who was active in the community of Rochville, New York, and Frank Jr. would accompany him on business trips, along the way taking a keen interest in how the business worked, and how payments were made.

Frank Abagnale’s first scam took place when he was only 15 years old. His father had given him a truck to get to his part-time job, along with a card that could only be used to buy gas, but soon Frank Jr. had found a loophole in the terms. He began to buy a range of items from garages, such as tires and batteries, and then returned them for a cash refund. The motivation for the scheme was to build up some date money, but soon Frank Sr. was landed with a bill for $3,400, and the scam was revealed.

Frank Abagnale’s next target was far bigger, namely the banking system. He began writing personal checks on his own account, which was usually overdrawn, but of course, the banks would soon catch up with him and demand payment, so Frank began opening new accounts at other banks, and it was for this that he began creating new identities. Frank’s shenanigans with the banks didn’t end there, he experimented with forging payroll checks, and persuaded banks to advance him the balance before they had cleared. Another ingenious trick he created involved printing his account number on deposit slips and then mixing the doctored slips in with real ones, with the result that many deposits made by customers went to his account, rather than the intended one.

One of Frank Abagnale’s most outrageous scams involved a drop box at an airport. After observing where car rental companies and airlines would drop off their takings every day, Frank simply bought a security guard costume and placed a sign over the drop box that said ‘Out of Service. Leave Deposits with Security Guard on Duty’. The trick worked perfectly, which astonished even Frank, who couldn’t believe that no-one questioned how a drop box could be out of service

Frank’s most famous scam involved his impersonation of a pilot. By simply phoning Pan Am, and informing them he was a pilot who had lost his uniform, he obtained a genuine one, with the help of a fake Pan Am employee ID. A Fake Federal Aviation Administration (FAA) Pilot’s license was next, and between the ages of 16 and 18 Frank flew on more than 250 flights for free. He visited 26 countries and always received free hotel stays as a pilot. Frank logged over 1 million miles in the air, and even though he couldn’t claim the air-miles, the free hotel lodging and food bills that were billed back to Pan Am more than made up for it. On one occasion Frank was even invited to take the controls of a plane in mid-flight but wisely decided to enable the autopilot at 30,000 as he alone was aware that his life, and everyone else’s on board, were in the hands of someone who ‘Couldn’t fly a kite’.

After a close call where he was almost arrested at a New Orleans airport, Frank began impersonating a teaching assistant at Brigham Young University, followed by almost a year when he played the part of a pediatrician at a Georgia hospital. On that occasion, Frank let the interns do most of the work, but eventually realized someone could die due to his scam, so he faked a Harvard University transcript, passed the Louisiana Bar exam, and got a job with the Louisiana State Attorney General’s office, still aged only 19. Eventually, a suspicious workmate asked too many questions about Frank’s claim to being tenured at Harvard and he quickly resigned from the job.

The law caught up with Frank Abagnale when a flight attendant he had dated recognized him in France in 1969. Twelve other countries wanted to extradite him, but the French sentenced him to one year in jail first, which he served in miserable conditions at a filthy prison in Perpignan, France. After serving a year in France, Frank was deported to Sweden, where he served another six months in jail, albeit in far more humane conditions, and he was then deported back to the US, where he received a twelve-year sentence for several counts of forgery.

It was here where Frank’s supreme confidence when performing confidence tricks really paid off. In 1974, after serving less than four years of his sentence, he was paroled on the condition he would help federal authorities to investigate scams and con tricks, although he wouldn’t be paid for his assistance. After a brief period where he tried a few mundane jobs, Frank eventually returned to the banks, but this time instead of robbing them, he offered to show them how to avoid being robbed by other con-men, with his own infamous history as an unusual, but highly impressive resume proving his expertise of the subject.

Frank Abagnale’s first legitimate transaction with a bank earned him only $500, but also a personal recommendation to other banks, and with word of mouth advertising his unique and highly qualified expertise, Frank’s second life as a top security consultant was born. Although Frank’s life of crime had only culminated in a few years in jail, his second career was far more lucrative. Frank later founded Abagnale & Associates, his own security consultancy, and now in 2018, he continues to work closely with the FBI, even teaching at the FBI Academy at Quantico.

Frank Abagnale has built a legitimate fortune of $10 million through his security work, and he continues to lecture to FBI field offices nationwide. He has worked with more than 14,000 institutions and companies, and in 2012 he testified before the US Senate about the inherent vulnerabilities of social security numbers when used on Medicare cards.

Frank met his wife Kelly while working for the FBI, and although it was breaking FBI protocol, Frank told her who he really was because he wanted to continue seeing her. The couple married in 1976 and Frank has since credited Kelly with inspiring him to turn his life around for good.

Does Frank Abagnale Jr. have any children?

Frank and Kelly have three sons, Scott, Chris and Sean, and Sean has also joined the FBI. Frank and FBI Special Agent Joseph Shea, who was played by Tom Hanks in ‘Catch Me If You Can’, remained good friends for many years until Joseph ‘s death in 2005.

Apart from the autobiographical ‘Catch Me If You Can’, published in 1980, on which the film was based, Frank, has also published ‘The Art of The Steal’, in 2001, ‘Real U Guide to Identity Theft’ in 2004, and the best-selling ‘Stealing Your Life’ in 2007. He has been featured on TV several times. He appeared on The Tonight Show in the 1970’s, but he also made a cameo appearance in Spielberg’s story of his life, as a French police officer. Frank was featured in a commercial for IBM in 2016, and in 2017 he appeared in ‘Talks at Google’, speaking about his life and experiences, his thoughts about the future of Global Security, and perhaps most importantly of all, how the rest of us can avoid getting scammed by someone impersonating a younger Frank Abagnale.