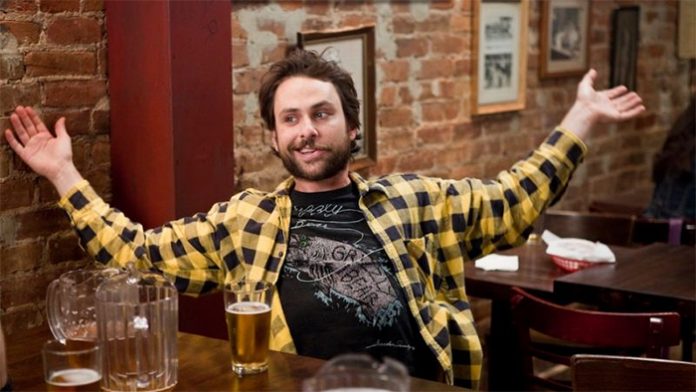 An American actor, Charlie Day is perhaps best known for playing Charlie Kelly in the FX sitcom, It’s Always Sunny in Philadelphia. Incredibly popular, he has starred on the show for more than a decade, since 2005. Some of the other television series that he’s appeared in include American Dad!, Drunk History, Law & Order, and Luis.

On the big screen, he has also worked on several titles including Monsters University, The Lego Movie, The Hollars, and Pacific Rim Uprising. In fact, he will be co-starring in the upcoming film, Hotel Artemis, which is scheduled to be released in June 2018.

How lucrative is his acting career? How much has he earned from his various television and film gigs? How much is he paid for his appearances on It’s Always Sunny in Philadelphia? How rich is the 42-year-old television star? According to various sources, Charlie Day has amassed a net worth of around $25 million as of 2018.

How did Charlie Day Make His Money & Wealth?

Born on February 9, 1976, in New York City, New York, Charlie Day grew up in Rhode Island, where he attended Portsmouth Abbey School as a teen. After graduating, he attended Merrimack College, from which he received a bachelor’s degree in 1998. Ultimately, it wasn’t until the early 2000’s that he started to dabble in acting. Some of his early credits include Madigan Men, Law & Order and Mary and Rhoda.

After landing a couple of recurring roles in Third Watch and Luis, he was cast as Charlie Kelly in the sitcom, It’s Always Sunny in Philadelphia in 2005. His first time playing a lead protagonist, his portrayal won him critical acclaim in the mid to late 2000’s. Responsible for his rise to fame, the show is still continuing as we speak- according to reports, the thirteenth season will premiere sometime in late 2018.

Not only does he play the role in the series, but he also works behind the scenes as a writer and executive producer. Unfortunately, it has not been disclosed how much he earns per episode. Considering how long the sitcom has been on the air, however, it’s likely that he’s pulled in a decent amount over the years. As far as other television appearances go, he has also worked on shows such as Unsurprised, American Dad!, Drunk History, and Reno 911!.

Like most actors, he has also worked on a number of films. Some of his most noteworthy credits include The Lego Movie, Pacific Rim, Party Central, The Lego Movie: 4D A New Adventure, and Pacific Rim Uprising. Later this summer, he will be starring in a movie titled, Hotel Artemis alongside Jodie Foster, Sterling K. Brown, and Sofia Boutella, among several others.

As far as other things go, he has worked as a producer for several TV programs including Unsupervised, and How To Be a Gentleman. In the past, he has also hosted a couple of shows such as Saturday Night Live.

Yes, he has been married to Mary Elizabeth Ellis for over ten years. After two years of dating, they tied the knot in 2006.

Does Charlie Day Have Any Children?

Yes, they have a son named Russell Wallace who was born in 2011.

Did Charlie Day Go to College?

Yes, he went to Merrimack College in Massachusetts after graduating from high school.

What is Charlie Day Famous For?

Charlie Day rose to fame as Charlie Kelly on the popular sitcom, It’s Always Sunny in Philadelphia, which has been on the air since 2005.

Charlie Day currently lives with his family in New York. Unfortunately, that’s all the information that we have at this time.

What Kind of Car Does Charlie Day Drive?

Details on Charlie Day’s vehicle are not available.

How Much Money Did Charlie Day Make Last Year?

At this time, we do not have any information on Charlie Day’s annual salary.

Earlier this year, he reprised his role as Dr. Newton Geiszler in the sci-fi film Pacific Rim Uprising.  A sequel to the 2013 film Pacific Rim, it opened in theatres on March 23, 2018.

As far as upcoming roles go, he will be playing the part of Acapulco in a film called Hotel Artemis, which is scheduled to be released later this summer.

Want to keep up with the actor? If so, why not follow him on social media? You can find Charlie Day on Twitter at @Its_Charlie_Day or on Instagram at @CharlieDayOfficial. While you’re at it, you can also like his official Facebook fan page here.