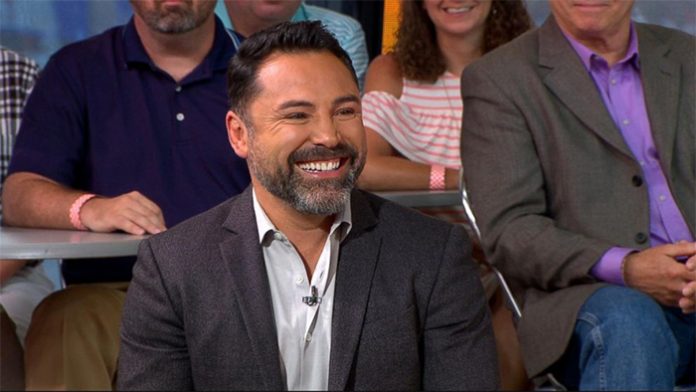 A former professional boxer, De La Hoya represented the US at the 1992 Summer Olympics, where he successfully brought home a gold medal. Considered one of the greatest boxers of all time, he has won many world titles in half a dozen weight classes. After sixteen years of battling in the ring, he announced his retirement in 2009.

In addition to his boxing career, he is also the founder of Golden Boy Promotions, a promotional firm for combat sports. In fact, he is the first Mexican-American to take on such an endeavor.

How financially successful is he, considering all the achievements that he has to his name? How much did he earn from his professional boxing career? From his other endeavors? According to various sources, De La Hoya’s net worth is an estimated $200 million. Where did most of his wealth come from? Hopefully, we’ll be able to answer that question below.

How did De La Hoya Make His Money & Wealth?

Hailing from Los Angeles, California, she was born into a boxing family; both his father and grandfather were boxers. Inspired by his idol, Sugar Ray Leonard, he began boxing at the age of six. With training and hard work, he eventually made it to the Junior Olympics in his teens, where he won his first national title.

As an amateur, he participated in nearly 400 matches, over 200 of which were wins. By the time he was seventeen, he had won his first US National Championships in the featherweight division. Two years later, he successfully defeated Marco Rudolph at the 1992 Summer Olympics for a gold medal, a feat that earned him the nickname, “The Golden Boy.”

That fall, he made his professional debut in the super featherweight division. From there, he eventually moved up the lightweight category in 1994. One of his most noteworthy matches included the one against the former lightweight champion, Rafael Ruelas, whom he ultimately defeated. Over the next two decades, De La Hoya continued to fight in various weight classes (e.g. welterweight, light middleweight, middleweight, etc.). By the time he retired in 2009, he had distinguished himself with multiple world titles.

Hailed as one of the greatest boxers of all time, it’s said that had generated close to $700 million in pay-per-view income during his career, making him one of the greatest earners. As you can probably expect, most of his current wealth stems back to his success in the ring.

Having said that, he is involved with other projects- for instance, he founded a sports promotional firmed called Golden Boy Promotions in 2002. In doing so, he had become the first American of Mexican descent to take on such a venture.

On television, De La Hoya has also been featured in several programs such as Celebrity Family Feud, Teens Wanna Know, Hollywood Squares, and 30 For 30. Not only that, but he’s worked on a few documentaries including CounterPunch, Behind the Gate, 26 Years: The Dewey Bozella Story, and De La Hoya/Mayweather 24/7.

In fact, he has even acted on a couple of occasions in the series Arli$$, and George Lopez.

He has been married to Billie Corretjer since 2001. Previously, he was engaged to actress Shanna Moakler.

Does Oscar De La Hoya Have Any Children?

Yes, he has two children with his wife, Nina Lauren Nenitte de la Hoya (b. 2007), and Oscar Gabriel de La Hoya (b. 2005). From previous relationships, he also has three other children.

No, he has not gone to college. Instead, he pursued a boxing career.

What is he Famous For?

Oscar De La Hoya is perhaps best known for his professional boxing career, which spanned from 1992 until his retirement in 2009. While still an amateur, he won a gold medal at the 1992 Summer Olympics in the lightweight division.

Unfortunately, we do not have much information on Oscar De La Hoya’s whereabouts at this time, nor do we have any photos of his home.

What Kind of Car Does Oscar De La Hoya Drive?

Details on Oscar De La Hoya’s vehicle are not available.

Unfortunately, details on his annual earnings are unavailable at this time.

Last year, De La Hoya appeared in a few television programs including Mike and Mike in the Morning, Fox and Friends and The MMA Hour with Ariel Helwani. According to IMDb, he will be making appearances in the documentaries I Am Duran and Le Champion later this year.

What’s she up to? Keep up with the former boxer by following him on social media- you can find him on Instagram at @OscarDeLahoya.