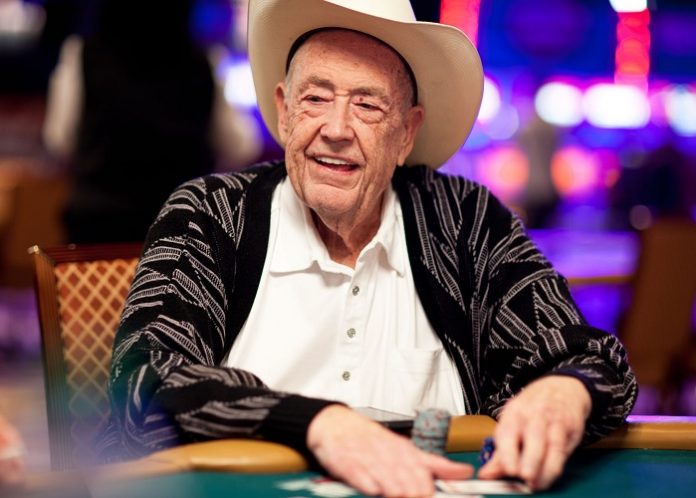 Doyle Brunson is the grandfather of high-stakes poker. The Texas native has played poker for over fifty years and graduated from illegal back-room games organized by gangsters, to the bright lights of Las Vegas, and he’s always been at the top of the heap. Doyle’s professionalism and reputation precedes him now in 2018, his accomplishments are numerous, and he’s been involved with the most revered title of all, the World Series of Poker (WSOP) Main Event since it first began way back in 1970.

Doyle has helped more than a few of today’s top professional poker players reach the top with his series of highly-respected books on how to play winning poker, and he’s still teaching some of them a lesson at the tables now in 2018, at the ripe old age of 84. But how much has The Texas Dolly taken in winnings during his long career? And how much is Doyle worth today? Read on to find out.

How Did Doyle Brunson make his money & wealth?

Doyle Brunson was born in Longworth, Texas on August 10th 1933, not much is known about his family other than he had two siblings. Doyle showed early athletic ability, he participated in the one-mile event in the 1950 Texas Inter-scholastic Track meet and won it with a time of 4 minutes 43 seconds, but it was basketball that seemed to be his most likely future career. Doyle came to the attention of the Minneapolis Lakers as a possible future NBA star, but a serious knee injury put on end to Doyle’s sporting hopes in the early fifties, and after graduating with a master’s degree in administrative education in 1954, he began working as a salesman, but poker soon became a far more profitable career choice for him.

Doyle Brunson had begun playing five-card draw in college, and his interest in poker increased after his knee injury. On his first day as a salesman he took part in a seven-card stud tournament and ended up winning with more than a month’s salary as a result, naturally, it wasn’t long before the sales job was ditched for a career as a professional poker player.

Doyle Brunson’s early career saw him playing in many illegal games in Fort Worth, Texas. The organizers of these games were often connected with organized crime, and there have been remarks from Doyle over the years that suggest being held up at gunpoint, or being beaten and robbed, were not unfamiliar experiences for him during those shady early years. Doyle became a member of a gambling syndicate with other professional gamblers including Sailor Roberts and Amarillo Slim, and the group became ‘rounders’, players who would travel around the country, betting on high-stakes poker games, as well as golf, and almost anything else that they could put a bet on.

Doyle and his fellow gamblers eventually raised a six-figure sum, a huge amount of money for the late 1950’s, and they pooled their cash together and visited Las Vegas for a determined effort to win in the big stakes, but instead, the group lost everything. Doyle continued playing poker, building up his stake with regular good performances, and although he remained on good terms with Sailor Roberts and Amarillo Slim, the group never betted as a partnership again.

After marrying wife Louise in 1962, Doyle eventually returned to Las Vegas and settled there permanently. In 1970 the first WSOP main event took place, and Doyle Brunson has been there for almost every WSOP main event since. Doyle’s former partner, Amarillo Slim, picked up a $60,000 win in the $10,000 No Limit WSOP Hold-em Championship in 1972, and another smaller win in 1974. Sailor Roberts picked up a small win in 1974 as well, but in 1975 he won the huge sum of $210,000 for his $10,000 No Limit win. Doyle may have wondered at the time when he would take a coveted WSOP Bracelet, but he didn’t have long to wait, the next few years were dominated by him.

Doyle won back-to-back $10,000 No Limit WSOP Championships in 1976 and 1977, winning a total of $570,000, and he also took two more bracelets with smaller tournaments those years, winning another $140,000. Doyle has since accumulated a total of 10 WSOP Bracelets, leaving him in tied all-time second place with Phil Ivey and Johnny Chan, and he’s won over $6 million in live tournament finishes. Doyle has also authored one of the most widely-respected poker guides of all time, ‘Doyle Brunson’s Super System’, first published in 1979, which he updated in ‘Super System 2’ in 2005. Doyle has also published a number of other poker guides, and an autobiography, ‘The Godfather of Poker: The Doyle Brunson Story’, published in 2009.

Doyle married his wife Louise in 1962, and she fell pregnant later that year. Doctors discovered a tumor on Doyle’s neck which was found to be cancerous after it was removed. Doyle was not expected to see live long enough to see the birth of his first child, but after an operation to prolong his life slightly, he was found to have made a miraculous recovery. Doyle has given the credit for his recovery to the prayers of friends and family, as well as the efforts of a faith-healer, and perhaps he’s on to something, Louise also developed a tumor the following year, but once again it had completely disappeared within months.

Does Doyle Brunson have any Children?

Doyle’s daughter Doyla suffered from scoliosis at a young age, but after being diagnosed with the illness, her spine completely straightened out within a few months, unfortunately, the miraculous cures that Doyle and his family had enjoyed didn’t help when Doyla died at the age of 18 from a heart condition. Doyle also has a son, Todd, who is also a professional poker player. Todd picked up a WSOP Bracelet in 2005 and has won a career total of over $4 million in live tournaments.

Doyle Brunson is now 84, but he still plays poker regularly, as anyone who follows him on Twitter, where he frequently posts about the game, can see. Doyle’s old poker partner Amarillo Slim died in 2012 aged 83, and Sailor Roberts died back in 1995, but Doyle continues to be a semi-regular face in televised high-stakes games, and a regular contender at WSOP tournaments.

Doyle Brunson’s income and earnings in 2018

The majority of Doyle Brunson’s winnings are likely to come from cash games, and the true figure of his annual income is not known, but ‘Super System’ is still regarded as one of the most authoritative guides for players and continues to sell well. Doyle last made the cut in a WSOP tournament in 2015 $10,000 No Limit Hold-em championship, the same event that saw Phil Hellmuth win his record-breaking fourteenth bracelet, but since then Doyle has failed to make a WSOP Main Event final table.

Doyle Brunson’s reputation is such an integral part of the modern game, that he has not one, but two hands named after him. Hole cards of ten-two are known as a Doyle after he won both his WSOP titles in 1976 and 1977 with those hole cards and a full house. An Ace-Queen suited is also known as a Doyle Brunson, as he claimed in Super System that he never plays the hand, although in Super System 2 that had been amended slightly to a claim that he ‘never tries to play that hand’. Doyle is one of only four players who has won the WSOP Main Event more than once, and he is one of only two players, along with Bill Boyd, who has won WSOP Bracelets in four consecutive years. Doyle was the first player to ever win a World Poker Tour (WPT) title as well as the WSOP Main Event, and he was voted as Poker’s most influential player of all time by Bluff magazine in 2006.