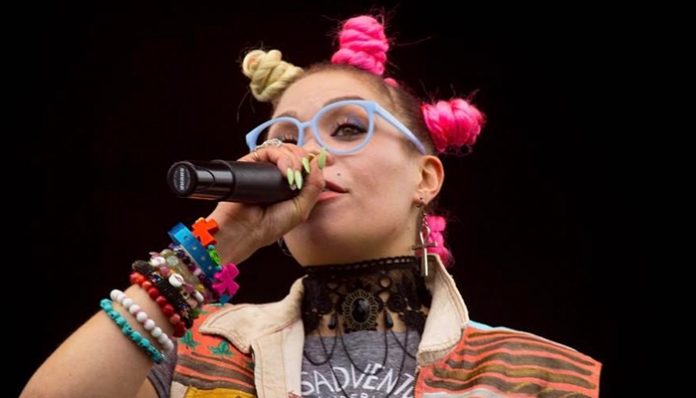 Noted for her blend of jazz and gangster rap, she has worked with several other artists such as DC Don Juan, A Plus, Jus Paul, and DJ Chris Styles. In fact, just last year, she landed a feature in Maycee’s I Got, which has since been played thousands of times online.

How much has she pulled in as a rapper? How rewarding has her music career been? Unfortunately, we do not have information on Pinky’s current net worth at this time. Since we’re here anyway though, let’s go over what we know about the artist. In doing so, we might just find a clue or two about how much she makes.

How did Pinky Make Her Money & Wealth?

Born on June 24, 1982, in West Oakland, California, Pinky (Real Name: Sarah Mirabelli) launched her career in the adult film world in her early twenties. Ultimately, it wasn’t until several years later that she decided to pursue a music career. With that said, she had always gravitated toward the arts. For instance, she was involved with a number of after-school art programs as a student (she even participated in a couple of musicals such as Once On This Island and The Wiz).

Considering the many years that she’d worked in the adult film industry, it’s likely that she had already banked a decent amount prior to pursuing rapper. Seeing as how she has shifted her focus to music in the recent years, however, it’d only make sense that most of her current income comes from her musical efforts.

Over the past few years, she has churned out a number of singles including No Smoke, Hippie Holiday, Tequila (Feat. Jus Paul), Pneumonia, and Cherry Bomb. In 2014, she released one of her first albums, Killacorn, which consisted of twelve songs.

In addition to her solo releases, she has done several collaborations with rappers such as A Plus, Visto, PatriceLIVE, Maycee, DJ Chris Styles, and Uptown X.O., among a few others. Some of these joint efforts include Aura, F Wit Me, Jumpback, and I Got.

As far as other endeavors go, she also has a YouTube channel, with over 44,000 views, which she’s most likely been monetizing. Though she only has a little over 1,400 subscribers at the time of this writing, her fan base is likely to grow given that she continues to release new music.

In terms of live performances, she has done a few in the past, though she does not have any planned for the next several months. For the latest announcements, be sure to follow her on social media.

Unfortunately, not much has been disclosed about Pinky’s relationship status. As far as we know though, she is not married.

Does Pinky Have Any Children?

Pinky does not have any children as far as we can tell.

Did Pinky Go to College?

Unfortunately, not much is known about Pinky’s education background at this time.

What is Pinky Famous For?

Pinky is perhaps best known for her songs Who They Want, No Smoke, Bumaye, and Sheets n Funnel, all of which have been played thousands of times on her Soundcloud account.

Where Does Pinky Live now? Pictures of Pinky’s House

Pinky Killacorn currently lives in Washington, D.C., where she continues to pursue her rap career. We do not have any pictures of her home at this time.

What Kind of Car Does Pinky Drive?

Details on Pinky’s vehicle are not available.

How Much Money Did Pinky Make Last Year?

At this time, we do not have any information on Pinky’s annual salary.

Last month, Pinky released a new song titled, How I Do It, which has already picked up over 850 streams online. Some of her other recent works include No Smoke, and Tequila, the latter of which featured guest vocals from Jus Paul.

Wondering what the rap artist is up to? How about following her on social media? That’s right- you can find Pinky Hillacorn on Twitter and Instagram at @Pinkykillacorn. While you’re at it, don’t forget to also like her Facebook fan page. For her latest songs, you can visit her Soundcloud page here.