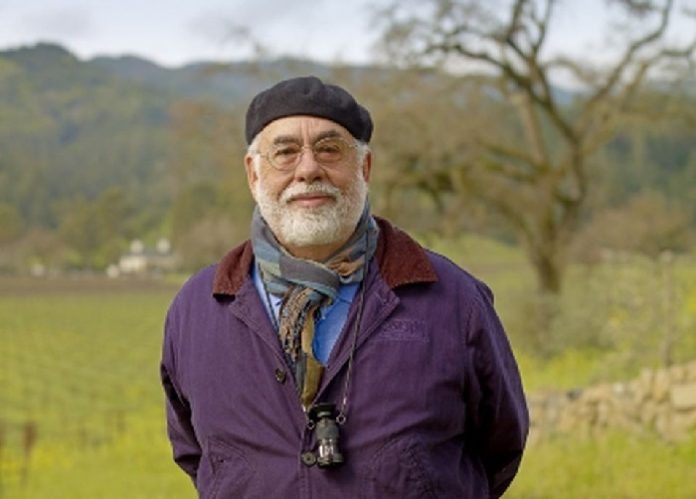 Francis Ford Coppola is a film director, screenwriter and producer who is best known for bringing to life one of the most successful series of big-screen blockbusters of all time, The Godfather trilogy. But apart from the heaps of awards he earned for his early 1970’s gangster epic, and the unique distinction of making a sequel that was actually as good, if not better, than the original, Francis Ford Coppola has also worked on several other iconic films from the 20th century, and his vision has allowed him to earn millions on each project he is involved with.

But these days Francis is no longer drawing the greatest percentage of his earnings from Hollywood, the director is involved with a variety of other business interests, and in his own words, these days he makes films in the same offhand way that other retired men play golf. Francis Ford Coppola has earned a huge fortune from his film-making career, and multiplied it many times over with his other activities, but how much is he worth now in 2018? Read on to find out.

How Did Francis Ford Coppola make his money & wealth?

Born in Detroit on April 7th, 1939, Francis came from a family of artists, his mother Carmine was a flutist with the Detroit Symphony Orchestra, his grandmother was an acclaimed Italian composer, and his sister was an actress. Francis was bedridden for much of his childhood with polio and passed the time by producing amateur puppet theater shows. He moved on to 8mm film and earned a degree in theater arts in 1960, from Hofstra College in Detroit.

Francis then enrolled in the UCLA Film School and had his directorial début in the 1962 comedy ‘Tonight for sure’. More directing jobs followed, and Francis built a reputation for being able to produce profitable films on a tight deadline, and more importantly, within a tight budget. In 1965 he won the Samuel Goldwyn award for best screenplay, and this enabled him to get a job as a scriptwriter. After several successful productions, including ‘You’re a big boy now’ in 1965, for which he won Golden Globe and Writers Guild of America nominations, and which he both wrote and directed, Francis was an established member of the ‘Brat-Pack’ of new Hollywood, a group of directors comprised of Francis, Steven Spielberg, Martin Scorsese, Woody Allen and George Lucas among others.

‘The Godfather’, an epic 3-hour-long classic of cinema, owes the unanimous acclaim it received to Coppola’s persistence. Paramount was adamant that Marlon Brando should not be cast in the lead role, at one stage telling Francis that Brando would definitely not be involved, but Coppola refused to consider anyone else for the titular role after seeing Brando’s screen test. After The Godfather was released in 1972, the widespread praise and numerous awards it received made Coppola the most sought-after director in Hollywood for much of the rest of the decade and secured his reputation as one of the greatest directors of all time. Stanley Kubrick later described The Godfather as possibly the greatest movie ever made and without question the one with the best cast. The film won two Academy Awards and is routinely ranked within the top three of the greatest cinematic productions of all time.

Apart from the incredible feat of producing a sequel to his masterpiece in 1974, a film that was hailed as also being one of the greatest films ever made, and almost certainly the greatest sequel ever made, ‘The Godfather Part II’, Francis Ford Coppola went on to produce several other iconic productions, perhaps most notable, Marlon Brando’s final role in ‘Apocalypse Now’ in 1979, the final part of the Godfather trilogy in 1990, and ‘Bram Stoker’s Dracula’ in 1992, but even though Francis Ford Coppola’s success as director has allowed him to command huge fees from Hollywood, his business interests extend much further than Tinsel-town these days.

Francis purchased an extensive 375-acre vineyard in California’s Napa Valley in 1975. The resulting business, Inglenook Winery, is a Coppola family-run business that produced the first vintage in 1977. Francis opened a second winery, The Francis Ford Coppola Winery near Geyserville, California in the 1990’s, and has since then extended the estate to include a family-friendly vacation destination complete with swimming pools, restaurants, and filled with film memorabilia, including the desk used by Marlon Brando’s character, Vito Corleone, in The Godfather.

Francis Ford Coppola also owns a sprawling lifestyle brand called the ‘Francis Ford Coppola Presents Lifestyle Brand’. This branch of his business empire includes many resorts, hotels, and restaurants around the globe. Many of the exotic locations owned by the business have won distinguished awards, such as the Lego Peten Itza resort in Guatemala, which won the ‘Best Resort in Central and South America’ award from travel industry leaders, Travel and Leisure, in 2013. The business also markets other goods and services, often from companies that Francis Ford Coppola owns, including pasta dishes, sauces, cafés and resorts, and films and videos.

In 1997, Francis Ford Coppola founded Zoetrope, a literary magazine which specializes in design and short stories. The publication, for which Francis acts as founding editor and publisher, has featured work by many famous names, among them Woody Allen, Steven Spielberg, David Bowie and Dennis Hopper. Francis also runs the Zoetrope Virtual Studio, a complete set of film-making studios that members can use to bring to life their creative endeavors, and Francis also co-owns the Uptown Theater in Napa, California as part of a group that restored the historic theater to create a new live entertainment venue.

The many other business interests of Francis Ford Coppola have boosted his wealth to a minimum of $300 million now in 2018, but even reputed sources such as Forbes speculate that his true net worth is likely to be in the region of $2 to $6 billion, if he were to sell off all of his business interests tomorrow.

Francis married wife Eleanor in 1963 and the couple had three children. Daughter Sofia has since become famous for her own directorial accomplishments, but personal tragedy struck the family in 1986 when Francis’ son Gian-Carlo, also a director, died in a boating accident at the age of 22. Francis has many relatives in the film industry and has also helped with the successful career of his nephew, Hollywood star Nicholas Cage.

The exact yearly income of Francis Ford Coppola is not known, but considering the variety of his many business interests, most of which cater to an exclusive demographic, and all of which are known to be highly profitable, it’s extremely likely that Francis receives an eight-figure annual income at the very least, not considering any of the other directing work that he becomes involved with, and all of which also boost his income by millions per year.

Francis Ford Coppola owns properties throughout the World, so many in fact that it is impossible to estimate how many, but his main residence is at the family-run winery in California’s Napa Valley that he bought in 1975. In 2004 he purchased the Palazzo Margherita in Bernalda, Italy, a small hilltop town where his grandfather was born. Francis was keen to return to his Italian roots and spent several years, and millions of dollars renovating the property, and now he has included the destination within the Francis Ford Coppola Presents Lifestyle Brand, so visitors can enjoy some of the peaceful tranquillity of rural Italy, all while being encircled by luxurious surroundings.