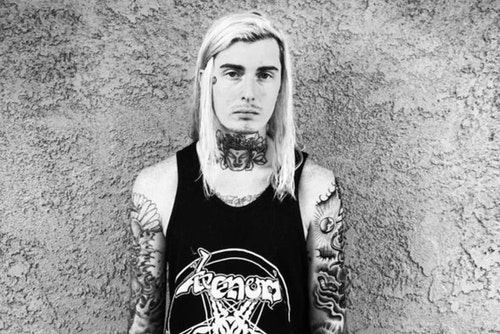 A rap artist from Florida, Ghostemane initially rose to fame as a member of the now-defunct group, SchemaPosse. Known for fusing the metal genre with hip-hop, he has released a number of hit songs such as Kybalion, Venom, and John Dee.

As far as albums go, he has churned out several over the past few years including Blackmage, Plagues, and Daemon. Most recently, he released Hexada in 2017. An up-and-rising star, the twenty-something has already amassed over 180,000 followers on Soundcloud. For his latest jams, be sure to follow him on the site!

How wealthy is he? According to various sources, Ghostemane has accumulated a net worth of $300,000 as of 2018. Where do most of his earnings come from?

How did Ghostemane Make His Money & Wealth?

Born on April 15, 1991, in Lake Worth, Florida, Ghostemane broke into the music scene at fourteen years old with multiple guitar covers, which he shared online. From there, he eventually transitioned into metalcore music. In the past, he was affiliated with the music group SchemaPosse, which also included artists such as JGRXXN and Lil Peep. Growing up, some of his greatest inspirations included The Number Twelve Looks Like You and Circle Takes the Square.

As you can probably expect, most of his income comes from his musical releases. Since his debut, Ghostemane has dropped a number of EPs including Taboo, Ghoste Tales, Ooga Booga, For the Aspiring Occultist and Dogma, to name a few. Uploaded online, most if not all of the albums have racked up hundreds of thousands of streams each on sites such as Soundcloud.

Today, some of his most popular tracks include Mercury: Retrograde, Andromeda, Venom, Hades, John Dee, and Seppuku. In addition to his solo efforts, Ghostemane has also collaborated with artists such as Pouya, Getter, Fat Nick, and Don Krez, among several others. In fact, one of his hottest hits, 1000 Rounds is a collaboration with Florida rapper, Pouya.

In addition to what he makes from his records, the rapper also pulls in a decent amount of money from putting on public events such as concerts and shows. In fact, he has a few performances scheduled for later this summer in the US and Canada. For more information on the dates, be sure to check out his official website.

Speaking of which, did you know that you can purchase a variety of merchandise items (e.g. t-shirts, hoodies, sweaters, etc.) on his site? By doing so, you’re also able to support the rapper’s work. Having said that, it looks like most of the items are currently sold out. Click here to visit his official store.

As far as other sources of income, it’s likely that he’s also been monetizing his YouTube channel, which has accumulated more than 370,000 subscribers.

Unfortunately, not much is known about Ghostemane’s personal life. With that said, it’s likely that he is currently in a relationship.

Does Ghostemane Have Any Children?

No, Ghostemane does not have any children that we know of.

Did Ghostemane Go to College?

No, as far as we know, Ghostemane has not gone to college. Instead, he decided to pursue a music career.

What is Ghostemane Famous For?

Though he initially gained fame as a member of SchemaPosse, he has since built a reputation for himself as a solo artist. Some of his most popular tracks include Mercury: Retrograde, Andromeda, and Venom.

Where Does Ghostemane Live now? Pictures of Ghostemane’s House

According to his Twitter bio, Ghostemane currently splits his time between Los Angeles and South Florida. Unfortunately, that’s the extent of what we know at this time.

What Kind of Car Does Ghostemane Drive?

Details on Ghostemane’s vehicle are not available.

How Much Money Did Ghostemane Make Last Year?

Unfortunately, details on Ghostemane’s annual earnings are unavailable at this time.

So far this year, Ghostemane has released two new singles, Boomerang and Dahlia I, both of which are available on iTunes. In addition to that, he also landed a feature in Mr. Sisco’s Vest Up.

As mentioned earlier, the rap artist will also be embarking on a concert tour later this summer.

Want to know what’s up? If you’re a fan, why not follow Ghostemane on social media? For instance, you can interact with him on Instagram and Twitter at @Ghostemane. As an alternative, you can also show your support by liking his official Fanpage fan page here.