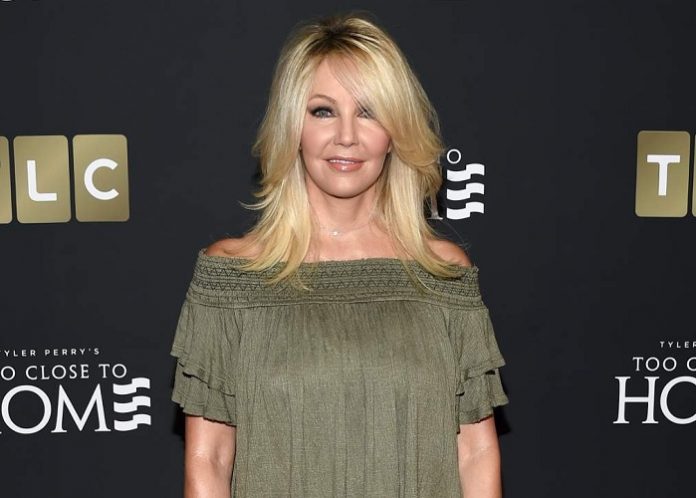 Thinking back to my dim memories of the 1980’s, I distinctly remember two things that were vitally important at the time, big hair and shoulder pads. During the ‘Decade that fashion forgot’, as some prefer to call it now, there was no other TV show that influenced those trends as much as ‘Dynasty’. Heather Locklear played the part of Sammy Jo Carrington on the show for eight years, and not only did she wear those shoulder pads with style, she also had the biggest and most impressive hair of all of her co-stars.

Dynasty was the number one show in the United States after the introduction of Joan Collins’ scheming character Alexis in the second season, and it remained at the top spot for most of the decade. It launched Heather’s successful TV career with a series of leading roles in some of the top-rated soap operas for the next twenty years, and she earned an impressive fortune along the way. But in the last few months she’s been in the news for all the wrong reasons, so what has been happening with Heather Locklear recently? And how much is she worth now in 2018? Read on to find out.

How Did Heather Locklear make her money & wealth?

Born in Los Angeles, California on September 25th, 1961, Heather Deen Locklear used her natural beauty and those thick, lustrous locks to her advantage while she was at UCLA. She embarked on a modeling career and soon began auditioning for small roles in TV shows. She won a few minor parts in shows such as ‘CHiPs’, and ‘Eight is Enough’, and in 1981 her big break came along when producer Aaron Spelling cast her in Dynasty. The series exploded in popularity when Joan Collins joined the cast in 1982, and Heather Locklear became a frequent face on the small screen when Aaron Spelling also picked her for a major role in ‘T.J. Hooker’ later that year.

Heather eventually played the part of Officer Stacy Sheridan in T.J. Hooker until 1986, over 84 episodes, and she continued to play a regular role in Dynasty until 1989, over 127 episodes in total. She made a number of other guest appearances on other popular TV shows during the 1980’s, most notably ‘The Fall Guy’, ‘Fantasy Island’ and ‘The Love Boat’. Heather usually played a love interest, and she was considered one of televisions leading sex-symbols at the time. She won roles in a number of TV movies, including the miniseries ‘Dynasty: The Reunion’ in 1991, and a starring role in ‘Going Places’ from 1990 to 1991.

The only low point in Heather’s career was in the 1989 flop ‘Return of Swamp Thing’, for which she won her first award, unfortunately, it was a Razzie Award for Worst Actress, but for the rest of the 1990’s her career prospered. She continued her association with Aaron Spelling once again in 1993, this time as the character Amanda Woodward on ‘Melrose Place’, and it became one of her best-known roles. Heather was in great demand during the 1990’s, she was a guest host on Saturday Night Live in 1994, and the main guest on Muppets Tonight in 1996. People Magazine listed her in their compilation of the 50 most beautiful people twice, in 1994 and 2001, and due to the popularity of Melrose Place, and her character Amanda, she was featured on the cover of Rolling Stone in 1994.

Heather received Golden Globe nominations for Best Actress every year from 1994 to 1997 for her work in Melrose Place, but she never managed to win the award. After Melrose place ended in 1999 she won another starring role in a hit TV show, this time as Caitlin Moore in ‘Spin City’, which ran for the next three years and earned her another two Golden Globe nominations, which she also failed to win, but she was in great demand for the next ten years. She appeared in numerous TV shows, among them big hits of the time, such as ‘Scrubs’, ‘Two and a Half Men’, ‘LAX’, ‘Boston Legal’, ‘Hannah Montana’ and the remake of Melrose Place in 2009. She has appeared in a number of big-screen roles over her career too, including ‘Wayne’s World 2’ in 1993, ‘The First Wives Club’ in 1996, and most recently in ‘Scary Movie 5’ in 2013.

Unfortunately, the almost effortless success that Heather has enjoyed throughout her career hasn’t been mirrored in her personal life. She married Motley Crue drummer Tommy Lee in 1986, but they divorced in 1993. The following year she wed another rock star, this time Richie Sambora, the guitarist from Bon Jovi, and they had a daughter, Ava, in 1997. In 2007 the couple divorced, somewhat acrimoniously, and she was romantically linked to Melrose Place co-star Jack Wagner for a while, briefly becoming engaged to him in 2011 before they split later that year.

What’s the story behind Heather Locklear’s arrest earlier in 2018?

In late 2017 Heather began a relationship with her old high-school sweetheart, Chris Heisser, but in February 2018, after an argument at her home, the police were called and Heather ended up being arrested on domestic abuse charges. Those charges have since been dropped, but unfortunately Heather snapped when police tried to handcuff her, and she has since been charged with four misdemeanor counts of battery of an officer. Heather has since entered rehab for a two-month long period, and she and Chris have appeared to move on from the incident. They were spotted laughing and joking and hand-in-hand after attending an AA meeting just two days ago, and fortunately, it seems that the couple is happier than ever.

Heather Locklear is not working as much as she did during most of her career, but she is still taking selected roles. During her most lucrative role, that of Amanda on Melrose Place, she picked up a paycheck of $100,000 per episode, and during just four years she earned almost $20 million from the role. She appeared in a recurring role in ‘Too Close to Home’ over eight episodes from 2016 to 2017, and she appeared in one episode of ‘Fresh Off the Boat’ last year, but currently, she does not have any other acting roles in the pipeline.

Where does Heather Locklear Live?

Heather, and first husband Tommy Lee, custom-built an 8,000 square-foot mansion set in a 4-acre estate in Thousand Oaks, California in 1990. After the couple divorced in 1993, Heather stayed there and is still living there now in 2018. The mansion boasts six bedrooms and eight bathrooms and is reported to be worth at least $7 million today.

Heather has supported a number of charities throughout her career, but she is particularly committed to those that help the fight against cancer. She supports the American Cancer Society and Csnaps, the organization launched by Ellen DeGeneres in 2014. She has also worked with Stand Up To Cancer and the Farrah Fawcett Foundation. In September 2017 she made a rare public appearance at the Tex-Mex Fiesta in aid of the Farrah Fawcett Foundation, where she posed with organizer Alana Stewart. Fans can keep up with Heather’s latest activities on her Instagram account, where she frequently posts to her 106,000 followers about her life, her latest projects, and most frequently of all, about ‘Mister’, her dog.