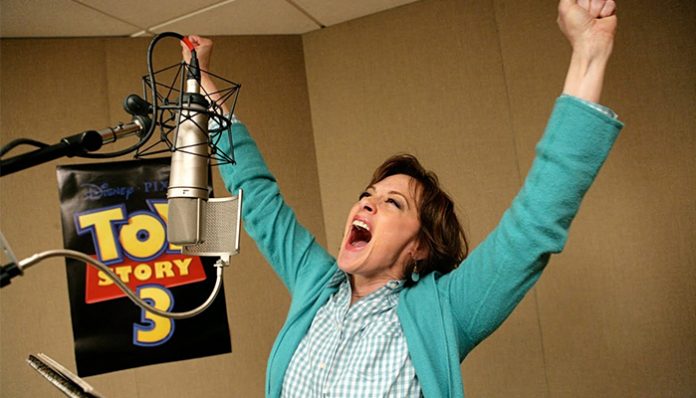 An award-winning actress, Joan Cusack initially rose to fame for her portrayal in the 1988 film, Working Girl. Since then, she has starred in numerous titles including Runaway Bride, In & Out, and Nine Months, to name a few. Not only that, but she is also the voice behind Jessie in the Toy Story franchise.

In addition to her film career, he has starred in several different television series including Peep and the Big Wide World, What About Joan?, and Shameless, the last of which earned her three Primetime Emmy Award nominations, one of which resulted in a win (Outstanding Guest Actress in a Comedy).

How much is she paid for her film and television appearances? How much has she earned in total as an actress? According to sources, Joan Cusack’s current net worth sits at approximately $8 million. Interested in knowing where she earned the majority of her wealth from? Keep reading!

How did Joan Cusack Make Her Money & Wealth?

Born on October 11, 1962, in New York City, New York, Joan Cusack grew up in the Chicago suburbs, where she caught the acting bug at an early age. As a teen, she appeared in several films including My Bodyguard, Sixteen Candles, Grandview, U.S.A., and Cutting Loose. Eventually branching to television, she played various characters in Saturday Night Live in the mid-1980’s.

A few years later, she co-starred in the romantic comedy film, Working Girl. A box office hit, it had grossed more than $102 million worldwide. Her first notable role on the big screen, it eventually earned her her first Academy Award nomination for Best Supporting Actress.

From there, her next big break came in 1997, when she starred in the film, In & Out. Praised for her portrayal of Emily Montgomery, Cusack garnered several industry accolades including a Golden Globe Award nomination for Best Supporting Actress. While the movie itself was a financial success, it’s unknown how much she was paid for the role.

Since then, she has appeared in dozens of films including My Sister’s Keeper, Confessions of a Shopaholic, Runaway Bride, Acceptance, and The Perks of Being a Wallflower, among many others. On top of live-action acting, she has also lent her voice to Jessie in the popular Toy Story film series.

As far as television appearances go, she narrated the children’s animated series, Peep and the Big Wide World for seven years, a role that earned her a Daytime Emmy Award nomination. Perhaps her most notable role of all, however, is that of Sheila Gallagher in the comedy-drama, Shameless. Premiered on Showtime in 2011, the actress appeared in the show for four years, during which she won multiple accolades including a Primetime Emmy Award for Outstanding Guest Actress in a Comedy Series.

In the years since, she has also appeared in The Office, A Series of Unfortunate Events, and The Christmas Train. On top of that, she has lent her voice to various characters in Phineas and Ferb, Toy Story of Terror, and The Stinky & Dirty Show.

Yes, Joan Cusack has been married to Richard Burke since 1996.

Does Joan Cusack Have Any Children?

Did Joan Cusack Go to College?

Yes, she did. Sometime after completing high school, she went to the University of Wisconsin-Madison, from which she obtained her bachelor’s degree in 1984.

What is Joan Cusack Famous For?

On film, she is best known for her roles in In & Out and Working Girl. In the more recent years, she has also gained widespread attention for her portrayal in the TV series Shameless, a role that earned her a Primetime Emmy Award in 2015.

Joan Cusack and her family live in Chicago, Illinois. Unfortunately, that’s the extension of the information that we have at this time.

What Kind of Car Does Joan Cusack Drive?

Details on Joan Cusack’s vehicle are not available.

How Much Money Did Joan Cusack Make Last Year?

At this time, we do not have any information on Joan Cusack’s annual salary.

Last year, Joan Cusack appeared in two films- Snatched and Unicorn Store. As far as television appearances go, she played a couple of roles in the titles A Series of Unfortunate Events and The Christmas Train.

Did you know that you can find the actress on social media? That’s right, Joan Cusack is active on Twitter at @RealJoanCusack. For her latest roles, you can check out her IMDb page by clicking here.