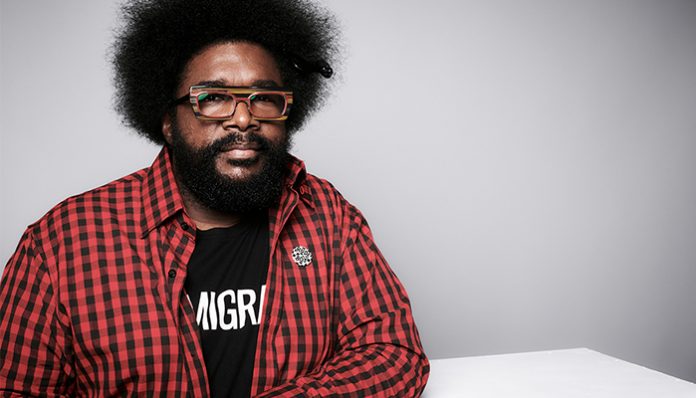 An award-winning musician, Questlove is perhaps best known as the drummer of the hip-hop band, The Roots. Since their debut, the group has released numerous albums including Things Fall Apart, Phrenology, and Do You Want More. Their most recent release, …And Then You Shoot Your Cousin came out in 2014.

In addition to his work with the band, he has produced recordings for many artists including Jill Scott, John Legend, Jay-Z, D’Angelo, Elvis Costello, and Bilal, to name a few. An occasional actor, he has also appeared in the television series Independent Lens, Empire, and Parks and Recreation.

How much has he earned from his career with The Roots? What are some of his greatest projects? How wealthy is the percussionist? According to various sources, Questlove has amassed a net worth of around $16 million as of 2018. Let’s go over some of his career highlights below.

How did Questlove Make His Money & Wealth?

Born on January 20, 1971, in Philadelphia, Pennsylvania, Questlove grew up surrounded by music as both of his parents were singers. As a young boy, he often accompanied them on tours, where he spent his time backstage. By the time he was seven years old, he had begun to drum on stage at shows. After completing high school, he went to Settlement Music School where he took composition and jazz classes.

Ultimately, it was during his time in high school that he began to perform Tariq Trotter aka “Black Thought” and Malik B. After playing a few gigs together, they adopted the name The Roots in 1992. Within a year, they released their first studio album, Organix, which made it onto the Top R&B Albums music chart.

Still, it wasn’t until the release of their second album, Do You Want More?!!!??! in 1994, that they started to gain more attention. Their first project to chart on the Billboard 200, it gave rise to three charting singles, Silent Treatment, Distortion to Static and Proceed.

Since then, they’ve released several additional albums including Phrenology, The Tipping Point, How I Got Over, and Rising Down, all of which commercial hits. According to reports, the band is currently working on the twelfth studio album, End Game.

As their drummer and joint foreman, chances are, Questlove has banked a considerable amount from his work with the group (especially when you take into consideration how long they’ve played together).

In addition to his work with The Roots, the musician has also produced songs for artists such as Jill Scott, Amy Winehouse, Al Green, Jay-Z, and John Legend, to name a few. In fact, he is a member of several production teams including The Soultronics, and Soulquarians.

Outside of music, he has also dabbled in acting. Some of the television series that he’s appeared in include iCarly, The Cleveland Show, Empire, Law & Order: Special Victims Unit, and Parks and Recreation. On the big screen, he has worked on the movies Top Five, Finding the Funk, and Bamboozled, among a few others.

Unfortunately, not much has been revealed about Questlove’s dating life. As far as we can tell, however, he is currently single.

Does Questlove Have Any Children?

As far as we know, Questlove does not have any children.

Did Questlove Go to College?

After completing high school, he studied composition and jazz at the Settlement Music School.

What is Questlove Famous For?

Questlove is best known as the drummer of the award-winning band, The Roots. Since their debut, they have released countless hits including You Got Me, Don’t Say Nuthin’ and Well, Well, Well.

Where Does Questlove Live now? Pictures of Questlove’s House

Unfortunately, we do not have any information on Questlove’s location at this time, nor do we have any pictures of his abode.

What Kind of Car Does Questlove Drive?

Details on Questlove’s vehicle are not available.

How Much Money Did Questlove Make Last Year?

At this time, we do not have any information on Questlove’s annual salary.

On the music front, he and the rest of the band will be releasing a new studio album titled, End Game sometime later this year. With that said, no release date has been announced as of yet.

Want to stay up-to-date with his activities? If so, why not follow him on social media? You can find him on Twitter and Instagram under the same username at @Questlove. While you’re at it, don’t forget to also show your support on Facebook by liking his official fan page- you can visit it here.