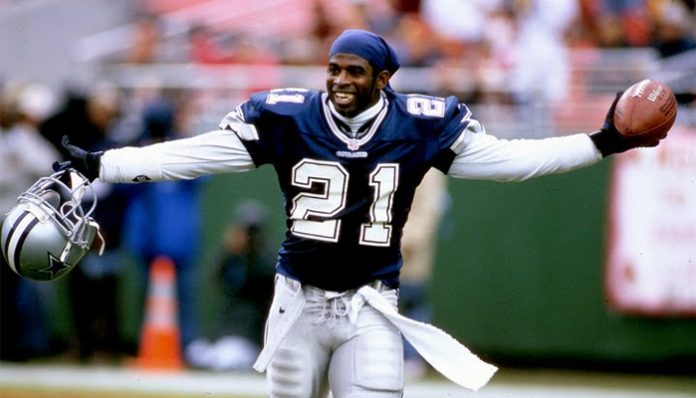 A former athlete, Deion Sanders launched his professional football career with the NFL in the late 1980’s. A member of the Atlanta Falcons, he eventually went on to play for a few other teams including the San Francisco 49ers, Washington Redskins, Dallas Cowboys, and Baltimore Ravens. After many years of playing the sport, he announced that he would be retiring indefinitely in 2006.

Since then, he has begun to work as a sports analyst for the NFL Network. Not only that, but he’s moved on to several other ventures; for instance, he has acted on a number of occasions in shows such as The League, The Soul Man, and With This Ring. On the big screen, he has also appeared in the movies Draft Day and White T.

How wealthy the former NFL star? How much did he make as a professional football player? How successful are his other ventures? According to the information that we could find online, Sanders’ current net worth is around $40 million.

How did Deion Sanders Make His Money & Wealth?

Born on August 9, 1967, in Fort Myers, Florida, Deion Sanders has been involved with sports ever since he was a young boy. As a teen, he went to North Fort Myers High School, where he was active in the baseball, basketball, and football teams. By 1985, he was named to the Florida All-Century Team, which selected some of the top players in the state.

From there, he was chosen by the Kansas City Royals during the 1985 Major League Baseball draft. Despite the opportunity, however, he opted not to sign with the team; instead, he enrolled at Florida State University. During his time there, he was active in baseball, track and field, as well as football. Ultimately, it wasn’t until a few years later, that he chose to sign with the New York Yankees in 1988. In the end, he played professional baseball for over a decade, until 2001.

At the same time as his baseball career, he also proved himself to be a talented football player. In fact, he had been selected by the Atlanta Falcons in the 1989 NFL Draft. After playing for them for four years, he signed with the San Francisco 49ers, with whom he enjoyed his most successful season. Not only did he score three touchdowns, but he also recorded 303 yards, which was a new NFL record at the time.

The following season, he signed a $35 million contract with the Dallas Cowboys. As part of the lucrative deal, he also received a $12.999 million signing bonus; with this, he became the highest-paid defensive player in the history of the NFL. Eventually released from the team in 2000, he signed a hefty $56 million contract with the Washington Redskins; after a disappointing year, however, he chose to retire abruptly in 2001.

Despite his retirement announcement, he was later lured back to the sport in 2004. That year, he signed a one-year contract with the Baltimore Ravens. Unfortunately, it’s not known how much he received as part of the deal at this time.

Deion Sanders has been in a relationship with businesswoman Tracey Edmonds since 2012.

Married twice in the past, his ex-wives include Carolyn Chambers and Pilar Biggers-Sanders.

Does Deion Sanders Have Any Children?

Did Deion Sanders Go to College?

Choosing to remain in Florida, he went to Florida State University after graduating from high school.

What is Deion Sanders Famous For?

Deion Sanders is perhaps best known for his NFL career, which spanned from 1989 to 2005. As a professional baseball player, he also enjoyed success during the 90’s.

Unfortunately, we do not have any information on Deion Sanders’ abode at this time, nor do we have any pictures to share.

What Kind of Car Does Deion Sanders Drive?

We do not have any information on Deion Sanders’ vehicle at this time.

How Much Money Did Deion Sanders Make Last Year?

Information on Deion Sanders’ 2017 earnings is not available.

So far this year, he has made a number of appearances in television programs such as The Rich Eisen Show, The Dan Patrick Show, Steve, and All or Nothing: The Dallas Cowboys.

Want to keep in touch with the former athlete? If so, why not follow him online? You’ll be happy to know that Deion Sanders can be found on both Twitter and Instagram at @DeionSanders. As far as we know though, he does not have an official fan page on Facebook.